Originally installing this application, it worked fine. After about a week it started to fail on loading local data after downloading a package from the server. (A few hundred KB).

Clearing cache, then data, and uninstalling it (as many have suggested) does not work. Support (https://support.eveonline.com) has indicated they don’t provide support for this application.

I can’t seem to get this to behave even after a reinstall. It’s almost like the update package is broken.

This is for the app eve portal which is why i tagged ccp swift, since they been working in this

@Afezan_Shardani in their defence, a lot of people do post in wrong locations.

As others have said, this is for Eve Portal. Support prompted me to follow up here.

Oh my god this is embarrassing - you didn’t see me, I was never here !

If he deletes his posts you should sell the screenshots for isk. Maybe it could be more valuable as an NFT than their corpse hehe

App has been abandoned. Last update was in February 2021 Just uninstall and forget.

With how buggy it is and how CCP marketed it as having direct connection to TQ. For me it’s just rings all red flags in terms of security. Both of your in game account and phone data. (this is just personal opinion)

There are other third party apps for android and IOS that use ESI to monitor your characters.

App has been abandoned.

Perhaps that’s the case? But I’ve seen some attention in the past day or so.

Either way if it’s been retired, it needs to be definitively retired. It was decent, helpful to manage emails, queues, observe jobs etc.

I used to use some other third party apps, but those are no longer maintained and are broken.

App has been updated

Yes. It was… Over year and half ago. 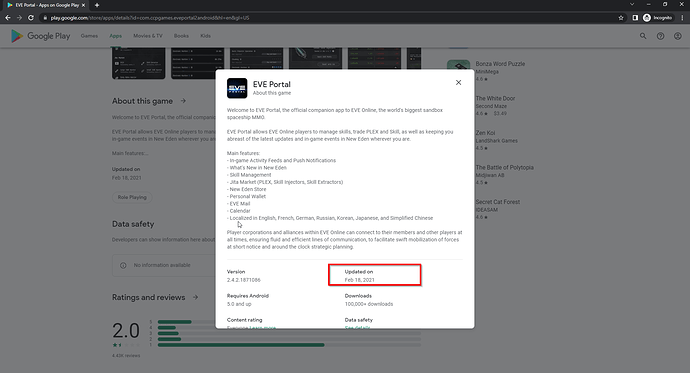 Does it still allow to train removed skills?
Or plex trading taxes are still misaligned to those in game?

issues affecting the usability of the EVE Portal app, most notably missing skills, have been updated. If there

This was posted a day or two ago.

Cool. I guess… But old reprocessing skills are still there. New ones are also there…

Anyway, made my point and wasted way to much time in doing so.

Looks like there may have been an update. There was content downloaded and it managed to load the local data again. Interesting.