Agreed… and sorry for that but I felt it better to give people as much info as I could now rather than have other readers have to scroll through the thread for answers to questions they may have.
Agreed though… its a bit of a beast… sorry

That said, it sounds similar to what you (and a lot of alliances) have done and the goal I have is to make it a New Eden wide event taking the race through HS/LS and NS allowing people to fully plan, scam and screw over the participants while allowing the participants the chance to circumvent the best New Eden has to offer in the way of ruining their race.
Multiple ships will almost certainly be a way to victory though… agreed.

LOL… well it isnt a scam… but thank you o7

You either read my mind or read the reddit.

This is EXACTELLY what I want!
In my head, all the participants pay their entry fee and scheme together (in corps or as participants) to win the race with the rest of New Eden (or those that can be bothered) making use of the intel and choke points to screw them over.

Content generation? Check
Big isk for the risk the participants take? Check.
No rules outside the main objective or game mechanics? Check.

I think it could work…

There are plenty of ways you could ■■■■ a blockade runner and not just from a “screw their race” perspective. Tactical clone jumps and podding with home station resets also come into play… if your sole plan relies on a bridged blockade runner than I can promise you, there are better strategists out there that will beat you to the prize.

Bump for interest.
Still looking to run this in March next year.

@Insidious_Sainthood Only the OP is allowed to bump threads, so please refrain from doing it again.

op can propose sort of race to win registration for the main race, like poker round,
if i participate a 50m race and can win a chance to enter the 600m ticket race, i think a lot of ppl try their luck!
also, capsulers can buy directly the 600m ticket to skip the preselection
in this case, i’m glady in!

Thank you for taking one for the team there…

This is still very much a thing and throughout Jan I have been busy with Corp recruitment so haven’t updated but am now working on putting some “tweaks” to the route and hopefully getting a website up and running.

I will update again in a few days with more news (if I have any!) but currently feedback I have had is:

I have also received a lot of suggestions about how people would “improve” it but adding tasks for people to complete in systems or some other suggestion requiring participants to complete some sort of task.

Just want to reiterate, the only task the participants will be forced to complete to win is to visit the systems in the order provided. If I introduce rules, people will get round them and it will be very difficult for me to confirm this so the easiest way is not to have any rules. Also, this adds to the “Mad Max” feeling of the race.

Once I have a route planned I will be testing it by asking corp members (some very log-standing players so hopefully know all the tricks) to test it on SiSi… I will let you all know how that goes.

I will also (hopefully if RL life permits) be more aggressively advertising this and securing those donations I spoke with you about (like the 50B Prize Pool).

Still planning all and thanks for the support and challenges.

EDIT:
This isn’t the final route and you can’t see systems so don’t mind posting but I’m thinking something like this: 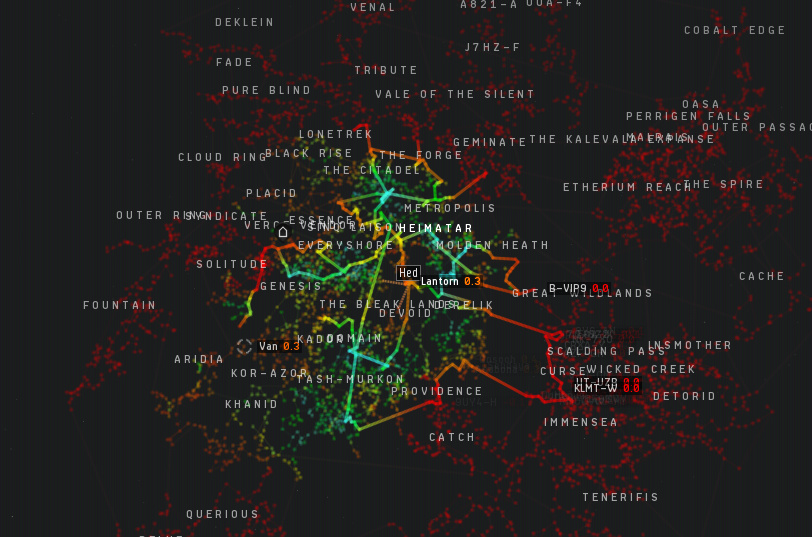 It would be nice, but I am running this with a skeleton crew and while I love the idea, this is something I have given thought to already actually but on a much larger scale.

An event like this will hopefully generate a lot of content and give pilots the chance to plan, scheme and whatever else they want to try and win or ruin it for those partaking.

I was actually hoping that eventually, this event would garner enough trust to charge upwards of 1B ISK per entry ticket to really get the prize pool up in the triple figures (imagine winning a share of 100B just for playing the game!) but also to act as a bit pf prestige for those that won… similar to bragging rights for the Alliance Tournament.

The next stage of that is then for other people to run their own races, either in the same format or with their own spin and rules for victory. I would then run a similar programme whereby ticket prices would still be high at 1B or even higher, and pilots could pay and enter but winning one of the smaller races would allow for free entry for 1/2/3 (etc) pilots from the winning Corp etc… or something like that… but tl’dr, I need to get this one off the ground first and build up trust so people want to participate so while a valid idea, I wont be doing that this time around.

Good shout though… and already considered

So… sent out a mail to diplos and senior people in some of the major Alliances and Corps basically asking them for sponsorship but also giving them the “heads up” I plan to go ahead with this… hopefully they take it seriously.

If I am honest, I am hoping they think “meh, whats 50B to us” and make a nice chunky donation but I’m not going to hold me breath… Id honestly just be happy if they believed me at this point! lol

I am also told I will get to preview the website tomorrow so, pending all is ok and no doubt some last minute changes, I should be able to launch and open registration for the race early Feb… fingers crossed.

Ill try and update this daily to gather more interest but for now, I have set up a Corp to deal with all of this and will update the OP with details.

Thanks for all the feedback so far and please continue to ask questions as someone else might be thinking it and not bother asking.

So, to say I am a bit disappointed I have, to date, received ZERO responses is an understatement.

Yeah, ok, I get that cold-calling some of the senior people in the alliances might not garner a reply but some of the people I’ve know for years and even arranged accommodation for them for EvE Vegas… I guess “out of sight out of mind” really rings true…

Also, someone informed me that a load of streamers are doing a race too… apart form the fact I reckon this was totally stolen (as part of the advertising I contacted a number of streamers with my idea), I don’t care and will still run my event. As I understand it, to participate you are required to complete certain tasks in certain systems which only works if… well, it doesn’t and only adds a variable for things to go wrong.

Right, b*tching over, I am told “good things come to those that wait”… which while not helping me in the short term, I am told the site will be ready to review “soon”. I actually trust the guy and we get on well (I’m going to his wedding in Romania!) and we met in Vegas last year so I have faith.

Is anyone still interested in this btw? VaM-Race (ingame toon) hasn’t received any mails from anyone showing any interest…

Bumped for views - Keen to see if people are interested.

although there really is little else left to do now except confirm the Trip Wire settings needed to keep score and get advertising.

So no poors allowed and only corporations with black ops can “win”, noted.

“No poors allowed” - Wealth is subjective but if what you meant to say was “Nobody with less ISK than the entry fee at the time participants are accepted and entry fee is sent” then yes, you would be 100% factually accurate.

“only corporations with black ops can “win”” - SSjGhost checks rules he himself wrote… Nope. Pretty sure anyone can win.

I’ll let you know that since we’ve had these forums, a few people have tried to host various races (or claimed to be). Most of these had few or none people indicating they’d want to take part. And these races did not have anywhere near the length or the entry fee of yours.
I can understand high level entrance fees for highly popular events, but you haven’t got one yet, and I don’t think you’ll have one soon like this.
In short, my advice is: Start small, hope for the best, prepare for the worst.