The latest official stable release can always be found here.

pyfa (python fitting assistant) - A cross-platform ship fitting tool, written in Python utilizing wxWidgets as it’s GUI toolkit. pyfa works on all platforms that Python and wxPython support, including Windows, OS X, and Linux. There is also someone who has created a FreeBSD port of it.

Simply download the package for the platform you want to use from the release page. Linux users: your package is basically a Tarbell of the source files; be sure to install the dependencies required. There are also some third-party packages for pyfa floating about for Debian and Arch that are maintained by third parties, check the README.

A complete listing of issues and their progress can always be found here. For bug reporting guidelines, take a look at the Wiki on GitHub.

All contributions are welcomed and done through pull requests on GitHub.

And since these new forums won’t allow me to post more than two links per post, have to stick some things here.

I did some research but I am not too satisfied with the answers, so I will ask you now!

Is there any way I can input a custom ship in Pyfa? Custom stats and all, because the Marshal has a ghost fit on SiSi and Tranquility with the old model, and I would like to mess with it in Pyfa!

Are you asking if there’s any way to create new ships / modules / etc with their own attributes / effects? Unfortunately there isn’t a user-friendly way of doing this. pyfa is open-source, so you can always open up the eve database that pyfa ships with and modify to your hearts content, but you will also need to have intrinsic knowledge of the data and how it works, as well as python (the effects that describe how items modify stats are written in python).

pyfa does have limited support for changing stats through it’s Attribute Editor - you’re able to load up ships / modules / etc and edit it’s base attribute. For example, if CCP is thinking about increasing the power usage of a Web II, you can search Web II and change the power attribute value. However, this doesn’t support 1) creating new items (only editing existing items), or 2) adding / editing effects (so, if there is a new ship out that has a specific combination of effects, you’re gonna have to hack at the database in order to support it).

There has been talk in the past about adding such a feature, but it’s been on the backburner. There would be a lot that goes into building the feature out and making sure it’s decently user-friendly. Maybe sometime in the future!

Okay, thanks for the info! That was exactly what I was afraid of, I’ll wait instead and use pyfa for the ships already out then, I am afraid of goofin up something XD

Keep up the awesome work, it works wonders!

I am afraid of goofin up something XD

haha, it’s definitely easy to goof, especially if there’s lack of SQL / python experience, but that’s half the fun! If you’re ever interested in how any of it works, feel free to get in touch with me

And with that said, I’m now announcing that v1.32.0 was just published - a bunch of bug fixes in this one along with a new feature: being able to select eve-marketdata.com as a pricing source for items within pyfa!

Awesome, but I’d rather reserve my head for robotics and automation, going to start a course in a few weeks

I can wait for what I want, so I will behave and Santa will give what I want!

Now to update my pyfa! 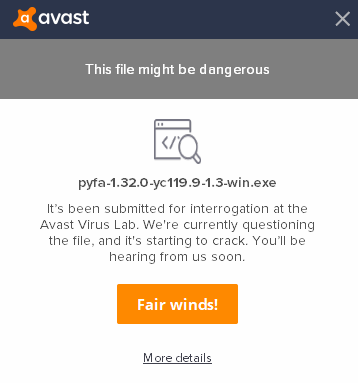 Avast! doesn’t seem to like it very much, but lets me run it after a while

Quick questions about the interface of pyfa.
Is it at all possible to make changes to the placement of the columns and keep them over different sessions?
I like to have CPU before Powergrid as it appears on the “Resources” portion.

Also is there anyway to force “Resources” to show the remaining available cpu/power instead of a %, or to atleast show it as follow “20 Left (2%)”?

Avast! doesn’t seem to like it very much, but lets me run it after a while

There’s always been issues with pyfa and anti-virus software, most likely because the exe hasn’t been downloaded enough to have a certain level of trust. And I always say, if someone’s not sure of it being legit, the source code is available for anyone to browse and run themselves in an isolated way

Is it at all possible to make changes to the placement of the columns and keep them over different sessions?

I like to have CPU before Powergrid as it appears on the “Resources” portion.

It’s not currently possible. You can change this in the source code, but it will just be over-written with the next release. I’m sure there is a way of storing them in the user settings, but what I’m not sure of is if there is a way of making it seamless and user-friendly by dragging them - something I’ll have to take a look into!

Also is there anyway to force “Resources” to show the remaining available cpu/power instead of a %, or to atleast show it as follow “20 Left (2%)”?

If you hover over it, it should tell you the absolute value. I don’t believe there would be enough space to show both absolute and percentage. I may be able to introduce an option to switch them around there (use absolute by default, percentage on hover) - will take a look!

I had an issue where the isk cost didnt show on my caracter when i had implants in so i tried to rightclick and “Reset price cache”. But after that ALL prices are gone…
How to get prices back?

pyfa uses eve-central to acquire prices by default, eve-central has been down for maintance.
This update added the ability to query prices from eve-market, go into settings > General > Default Market Prices > eve-marketdata.com
That will fix your problem.

first of all: great work on keeping pyfa up to date. love it!

There seems to be a “bug” in the crash boosters, or rather; it’s missing the shield boosting penalty side effect. when i apply the booster to a fit and right click it to set a side effect, the 3 other ones are there, but the 20% shield boost amount side effect for standard crash is not there as an option.
could that be fixed?

I think the signature on the Pontifex is wrong, as far as I can tell it has the same signature radius as the others in game (~60) but in pyfa it has ~30 sig.

Loggerhead logistic drone bonus is not applying, they are just unbonused.

I have a question or a proposition rather, perhaps if it has been mentioned or pointed and is on the road-map you would excuse me. The graph page options are limited to what sometimes I simply log SiSi and check that on servers.

The idea is that the ship “x” is core. and ship “y” is projected onto “x”. Lets take for example both those ships are logistics cruisers working in pair. Through developed falloff mechanics’ application to remote support transfer modules, we are aware that at the edge of first falloff it reduces the total 100% effect to 50% which is indeed as old mechanics for weapons to a chance to hit for example.

A thought I have for the graph section is to have that as either in graph or option in “projected” tab under the main ship tab, so that moving (or editing range from) the projecting “y” ship onto static “x”, you can see the change in effect on remote repair/transfer modules when “y” is deeper and deeper into falloff. Don’t know how much the whole community will benefit from this, even though my own interest is done on SiSi, this might prove to be an addition for Pyfa as a whole application.

Your math(s) are wrong on tank and dps lately. I don’t know why but I tried to create a tengu fit (a ship I am very well acquainted with) and in game buffer says 11k versus identical fit in pyfa of the last few patches anyway putting it at 17k buffer.
Also fighter DPS numbers are wrong, Pyfa says 1600-ish versus in game in same loadout i’m getting over 2200.

Cant say anything about the DPS though.