Is there anything I need to do to make my characters “ESI characters”?
When I update it gives me warnings that the characters can be migrated and I still get the 6 hour assets timer.
When I go into the Accounts window I see the migrate button but when I click it all the options are greyed out and ‘OK’ changes nothing. 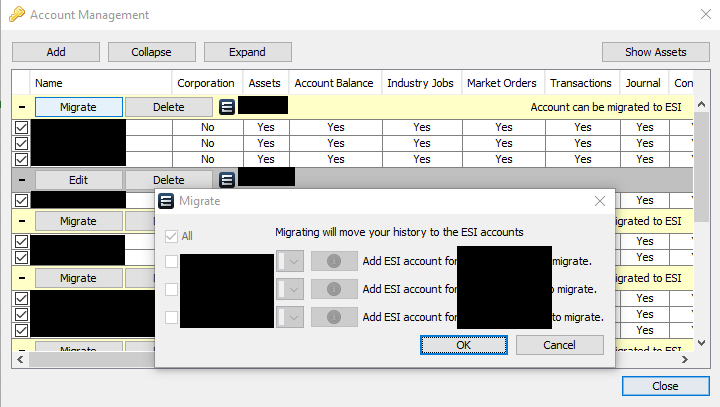 Edit: I figured it out. Had to use the ‘Add’ button and go through SSO auth for each character on each account, and then use the ‘Migrate’ buttons. Corporations cannot be migrated to ESI yet.

@Johann_Hemphill
Good job figuring it out yourself

Any suggestions to make process easier to understand?

Yerh, no corporation ESI accounts, yet, It will be done soon, though. Maybe already next week, with a bit of luck. All the endpoints are done, but, the corp assets endpoint have a bug (not returning all assets), that needs to be fixed first.

@All
I’m sorry for the instability of the latest jEveAssets releases. I’m working as fast as I can to fix everything and I won’t stop until jEveAssets is as stable as it used to be.

Not easy to go through every character on every account to repopulate lol. That would be a CCP thing. Best way I found was the click cancel once you’re done with an account and that will clear your login and allow you to select you next account quicker.

Yerh the SSO site could be more user friendly. But, there is a GitHub repo with SSO issues now, so, we all hope it will get better with time. The SSO team is not the same as the ESI team. The SSO team also handles a lot of internal CCP issues and are apparently super busy all the time.

Any suggestions to make process easier to understand?

Somehow I got the impression that “can be migrated to ESI” implied “will automatically be converted to ESI”. A line of instructions in the release notes would have done it for me. And a section on migration in the README. And a more detailed warning in the Update window which is where most folks are probably going to notice it. I first checked all over the CCP Support site to see if there was an option to switch my accounts to ESI because it was un-intuitive to me that I had to re-add the characters in Accounts, even though the message was clear enough in retrospect.

Just converted all of my characters to ESI and discovered one issue:

Looks like ships that are not docked are not covered in the asset list. This is problematic for supers that are sometimes docked and sometimes not where total assets fluctuate massively. It also doesn’t pick up anything stored in the supers etc. so when moving ships, they also disappear out of assets.

Is this a limitation of ESI or is it something that can be fixed?

That is a limitation of ESI.
If you like, you can add your voice to the ESI GitHub issue

Will do, thank you for the reply

I’m loving these shorter cache times. One question: I’ve noticed that the data pulled from the API is not real time data. I’m in the habit of avoiding placing big orders or moving items around for an hour before an update to ensure nothing gets counted twice. Any idea whether this has changed with ESI?

@Johann_Hemphill
If you update no more than once every hour via ESI, you should get a complete snapshot of everything, as no ESI endpoints have more than 1 hour cache time.

If you update more often than that, stuff may be inaccurate, as assets now in sell orders or contracts, may still be in assets, effectively being counted twice.
Additional, if your active ship is in space at the time of update, that will not be included in your assets. This is to avoid intel leaks via the assets endpoint. ATM. stuff fitted to your active ship in space is included, but, that may or may not change in future - once a decision have been made, I may include the active ship via the location endpoints, that allow you to get your active ship and location.

I’m pretty sure all data should be current when you update from the API. If you’re able to reproduce this in ESI, you should let me know, so, I can create an issue for it.

I’m a dedicated user of jEVEAssets, and I’'m happy to see the new version including ESI support.

But I am getting a consistent error when I update my data:

Can you help remedy this problem?

@Mollie_Athonille
Thank you for your bug report

To debug this I need the logs: How to send a bug report
I will look into it as soon as I have the logs…

Thanks for your answer in advance!

@ReacT1337
Thank you for your bug report

EDIT: I’m not able to reproduce the first bug, but, I will try to look into it today