@Beresh If you looking for PvP and an Alliance with real goals and real values you should check us out. Swing by our discord and ask for Wesley or Zipp 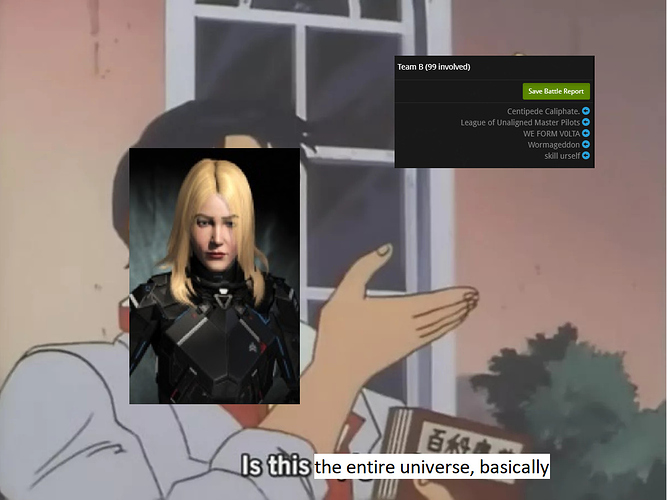 Viper-Squad Weekend Warriors Pure Blind - Null Sec Solo/Small Scale - Medium Fleet Shennanigans Our own content creators, not a part of any large coalition. Primarily EUTZ PVP oriented corporation founded in 2006. MASS RECRUITING!! WE ARE LIVE ONCE MORE!! Our corporation is now recruiting a few likeminded and active bros who are looking for a change, be it either a new group to get along with, …

Your post sounds like you are the perfect stereotype of one of our corp members here at Filthy Peasants. We’re a lowsec/npc 0.0 pvp corp that lives in lowsec Solitude. We are also an RL first corp with no activity requirements as we’re mostly all working adults. Our vision is to be the dominate corp in the Solitude and Southern Syndicate areas to which we’ve excelled for many years but there is always competition that creates conflict for us.

We have plenty of content available including cap ops, blops drops, roams, gate camps, and plenty of opportunities to make isk such as DEDs and moon mining. I would like to point out that we’re most active in the US TZs but we’ve begun expanding into the EU TZ as many EST members are active during the EU TZ. I can promise you that there will always be someone on when you’re on regardless of what TZ you’re most active in as we are an international group.

If your interested check out our killboard and forum post to see what we do. Feel free to join our public chat Open Filth or convo Arctanis in game for more information.

Just take a look… see ya

I think FUN inc would be a good fit!

Check us out here >> FUN Inc. - Putting the fun back into EVE

[PR Recruitment header 1 small] Now you’re whole corp can join us in our new alliance! If you’re tired of being just a number with no direction in Eve; Or perhaps being treated like you’re just fodder. NUL-L may be the Corp you haven’t found yet. We are selectively recruiting new pilots to our ranks. Join a premier PvP Corporation that actually gives a ■■■■ about you. nul-li-fy has been a top PvP Corp in alliances such as Nulli Secunda, Infamous, Circle-of-Two and Triumvirate; taking part i…

feel free to hit us up

We are Ushra’Khan and for sure we undock : we are a FW pvp alliance after all. And on a side note the oldest alliance of Eve.

If it’s your last attempt before winning Eve, well take your time and here are the facts : we do mainly small gang or solo pvp, bigger fleets happen but you prefer fleet pvp with bigger ships, it’s not our way of life even if we do it. The corp and alliance is pretty laid-back, we undock because we love pvp not to defend our krabbing ground.

FW has consequences : FW missions, different sizes of hulls for pvp according to the plex, permanent war mechanism, you won’t ever see Jita with your main so you need an alt for shopping.

To sum up : If you want safety, Faction Warfare doesn’t work. On the same topic, if you are looking for giant blobs neither will it work. But if you like frigs and destroyer pvp everyday with some bigger fleets from time to time, we are the place to go.

Don’t hesitate to contact us if you have questions. In the meantime, good luck finding what you are looking for.

Hope to see you in the battlefield,

Full add can be found here :

[corp-final] Kill’em all. Let Bob sort’em out : We serve on behalf of the glorious Minmatar Republic ! Public channel: K.E.A Pub No SP Requirements Alphas & Omegas Welcome FW & Lowsec PVP 100+ Members Do The Right Thing ! Apply Today ! Always outnumbered, always outgunned, never fearful We fight battleships with frigates, We fly ships worth the price of their ammo, We bring knives in gunfights and win, Our flag flies red, wet from the blood of our battles, and black, mourning our de…

So, found a corps in Null, did a bit with them for a week and their activity has fallen off a cliff - back to my own Corps…

Why is it such a nightmare trying to find a corps that is active and does things together like an MMO should? Or is it that im just out of luck?!

I am still looking for an active Corps that wants to do things together - PvP bias is a must. Can be Null, WH, Low sec or whatever; just as long as its having a laugh. Would prefer to move my corps into an alliance but tbh - not really bothered…

Please only respond if you can guarantee some relaxed, PvP focused lols with the options to make some iskies along the way. Fanks

If you’re interested in wormholes, take a look at LUX PERMANET. The only reason why I am not talking to you about joining us is because you’re EU tz.

look here … maybe we can be a new home

Hello, Capsuleer! We are Akimamur Industries - but many other PvE and PvP activities are also on the Menu. We welcome all professions and experience levels

Our primary area of operations is in Domain HiSec and LoSec. Our alliance offers operations also in nullsec near by. What we’re most proud of is our willingness to help new pilots develop skills in whichever area of the game they choose - once comfortable with Hi Sec we will introduce you to Low Sec and beyond! For the expe…

I replied to your earlier Beresh but I don’t think you talked to us since you’re EU TZ and we’re mostly a US TZ corp. I don’t know what times your active but if you’re around to have a chat join our public channel Open Filth and we’ll see if our play times align at all.

Beresh… i feel i recognise the name; if small gangs your thing and you want an easy time (no sov cta bs) give us a try in the interim; syndicate is fairly easy to access… anyway pretty sure ive spoken with you before so i’ll just leave it at
“we dont do blob stuff and some nights can be quiet so may only be roaming with one person; but most nights we do stuff in the eutz… i mean other than chase people around where we live and we have some sort of campaign ideas for winter formulating for content; pve n stuff is up to you but we live in null; null is null cept weve swapped constantly spawning anoms for high paid missions with syndicate lp rewards”

But what can you provide? i mean of course role wise in small/medium gangs, logi? ceptor? can you fc? what do you do?

sorry i dont do the typical ‘spam copy and paste’ replies to posts so often forget to put the forum ad, so here that is…

Preferring small gang content we are looking for like minded players to join us in Syndicate for group pve (burner missions/wormhole diving/abyss) and small gang PvP. Ideally you will be willing to operate on your own AND in small squads of upto 5 or 6. Though there is scope for larger engagements with the alliance and friends. Preferred doctrines are nano kite. Why Syndicate? Null security area’s can be used to make isk whilst scouting for wormholes and targets of opportunity both for conten…

some videos up, im involved with some other groups at a personal level either for content of just well, im sure you can look for yourself.

I replied earlier but maybe FW is not your thing. If you feel like trying low sec Faction Warfare, we are still recruiting and we are active in EU timezone : expect 20 people logged in to whom you have to add the alliance other corps and allied militia joining fleets.

If you want to use your dread alt more regularly than what low sec has to offer maybe try NPC null or the Special Interest Groups of some null entities.

Thanks Stephan; only problem is; I have always fought for Caldari state;

Hey lugburz ; I’ll get in touch in-game. We spoke last time. Interested to see what you are upto…