Lots of small gang action going down in Black Rise with a side of High Sec War Decs. A nice dessert to a weekend full of cap brawls. 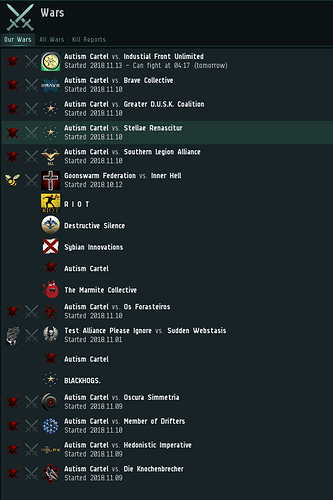 Picked up two more dudes! Recruitment drive is going really well. Get in now while the doors are still open. Looking for about 5 more active, quality players than going to close it down for a bit to let the new guys adjust and become part of the family before re-opening recruitment.

Added a couple more war decs, killed more stuff, the usual space terrorism. Couple more guys joined up and so far all the guys new to joining corp have been working out well.

Last night, we saw a mach bumping a freighter we weren’t planning on ganking, opened a convo and ransomed him that Autism Cartel wouldnt shoot him, dumb-dumb paid (thanks, Alfony VIII), than Goons came into system to gank (we are at war with goons), when the goons ganked the freighters we killed a bunch of goons, than stole the loot. Thanks goons, thanks Alfony VIII, you guys completed our night last night.

Oh and to the Brave Pilot who screwed up his warp in his cloaky travel fit proteus, thanks for the Excavator Drone lol. I’m just bummed he had no tank and was vaporized before the rest of us could even get on the kill mail lol

Another awesome weekend for AUTISM CARTEL!

Recruited three more guys, sniped some streamer that was incorrectly teaching players and providing lots of misinformation, and decided for an easy weekend of sitting on the JITA undock and destroyed/looted over 25b+ worth in goodies. Camping JITA isn’t really our MO, but nothing really is… One day we are Black Rise killing caps, next we track down a Golem in Kor-Azor, next a gate camp in Niarja and killing freighters, than our own cute little version of burn Jita. Oh yeah and we smart bombed some Hulks too just for laughs and did a BNI Roam through Black Rise. Wherever their is ■■■■ to be blown up - we will be there!

Looking for pirate corp, have done so before, Used thrasher to help with kills, i like Thrasher / Stabber, Au T.Z tho. Happy to live in low sec (preferred) not worried about losing sec status. Happy to use Thrasher if your happy.

Good Fun Cheap Fight over one of our content citadels.

Outnumbered 3:1 and almost pulled off the fight! Come and be a part of us today!

Caught a group anchoring a structure in space and war dec’d them for some content.

Looking for three more active pvpers to join up. Once those spots have been filled, recruitment will be back on hold for a short while. This is your chance to get in with a great group of dudes that now has a sizeable and active player base to start making some real waves in highsec and lowsec. Get in now before our next deployment!

What a terrible bunch of assholes lol. I love these guys and CEO just submitted another 9 war decs and doing roams into low/null daily.

A Cerb fit to kill frigs getting dunked by a Wolf.

Looking for more high quality pvpers or pilots with good listening skills wanting to aspire to become a great pvper!

We dunked a Nyx the other day, you could’ve too

Well its been a little bit, and figured it’s worth opening up the doors again to see what is out there.

This go around, here is what we are looking for:

If flying with a small-med group sounds like fun to you and you feel the need to throw around your cap epeen, give us a look.