A T2 fit Covetor can out-mine a max’d Orca. In fact a Covetor can ONLY be out-mined by a Hulk.

Well, it’s a fact : Hulk is only beaten by Rorq.

As I said, barges being obsolete is not all about the yield, if you have to replace your covetors 10 times a month, you’re better starting with 2-3 tanky Orcas and never bother about losses, plus, you never need mining crystals.

and never bother about losses

Was that Orca in 0.8 sec space tanked enough? I think that one was…

The first one is from an FOB pirate NPC, not a gank. The second one use expensive ships like T3 cruiser, given the fact the Orca killed is in a NPC corp, it look like he got himself suspect or baited, especially because the ships used to kill the orca don’t show up as losses for their owner.

If you are loosing 10 covetors a month then you are doing something VERY wrong.
I mined in HS for 7 years and in all that time only lost 2 or 3 hulks. 10 a month is a terrifying rate of attrition.

True I put a big number with 10 a month, myself I have lost 2 Mackinaw to ganking in highsec since 2012.
For exhumers, losing 2 Hulk is enough for a Orca btw, and I see them going down at least 2 a day in highsec on calm days.
The thing is, blinking is enough to lose a covetor to just one lone catalyst, while you really need to make multiple mistakes in a Orca (not putting tank, mining in a FOB infested system, getting suspect, etc.).

From my understanding after discussions with my high sec indy buddies, they use orcas and drones to keep mining as low effort as they can and they are uninterested in getting the ore fast. They are more interested in passively mining and playing a dif game, but with close to max skill exhumers your vastly going to out do the orca. Esp with t2 crystals and the cyber V implant.

Hulks are the highest performers but useless since they can be ganked so easily. Orcas are safer and allow for large volume storage (though 4x more expensive than a Hulk).
At this point, Eve doesn’t really allow you to max out Barges, since you have to buff up the shielding so much.
Shame, I really enjoyed tweeking the max out of the Hulks.

To me the easy solution that’s most Eveish is to simply make the orca more vulnerable.

If you stand a chance of losing one you won’t afk them out in a field and the calculus os using exhumers more appealing.

They need to be the support ships they’re meant to be and not a solo afk stand alone platform. Maybe their EHP is buffed by some % of active command burst recipients or something. So go out with 6 hulks and everyone becomes a lot more tanky and less gank bait. Going out alone increases the vulnerability. Leaving the skiff/procurer as the two more solo mining vessels would be a good niche for them too

as ive said before i know a maxed hulk can outdue my orca but you have to pour everything into mining yeild and than you have nothing for tank which makes you gank bait very easily, cov would be the same just cheaper.

youd have to use t2 miners, t2 upgrades, and t2 drone mining rigs

by the time you do all of this you can fit 1 or 2 harders and thats it, a catalyst or 2 comes along and your dead.

What if you mined outside of highsec.

To me, the high dollar barges are intended to be protected to pull in larger quantities of isk.

And yes, the barge outpulls the orca… even before bonuses… the bonuses are what make the barge amazing though… which don’t happen in solo highsec.

The orca needs a decent isk pull or people won’t like fielding it.

Making a huge isk vacuum that can work in highsec with no gank risk breaks the decision making of the mining community. There have to be drawbacks.

That’s the choice you need to make mate. You either get the best yield out of them all, but have ■■■■ tank, or you fit for tank with the lowest yield.

However, I agree that Porpoise, Orca and Rorqual seems a bit out, since they don’t have to make this choice. Mining drones are only affected by two things : the amount of SP you spend in Drone Interfacing, Mining Drone Operation and Mining Drone Specialization, and rigs.

This mean that they have free lowslots and mid slots, except maybe for a DDA to get more damage against potential attackers, and sometimes the drone navigation computer if they aren’t mining on top of rocks.

This leave the Industrial Command Ships with all the room they want to fit an extensive tank and lose absolutely nothing on their mining yield, and I do think it’s what makes Rorqual so powerful, alongside Orca in highsec. Just fit resistances, shield extenders for subcapitals, and the ancillary booster for Rorqual. Add a Damage Control and as much Power Diagnostic Systems in the lowslot and you’re good to go.
And what did you lost in the operation ? Three rigs. That’s it. Sometimes even less.

as ive said before i know a maxed hulk can outdue my orca but you have to pour everything into mining yeild and than you have nothing for tank which makes you gank bait very easily, cov would be the same just cheaper.

Actually, even in a max yeild fit procurer gets more than an orca.

A procurer. Those things that are super dupe tanky. 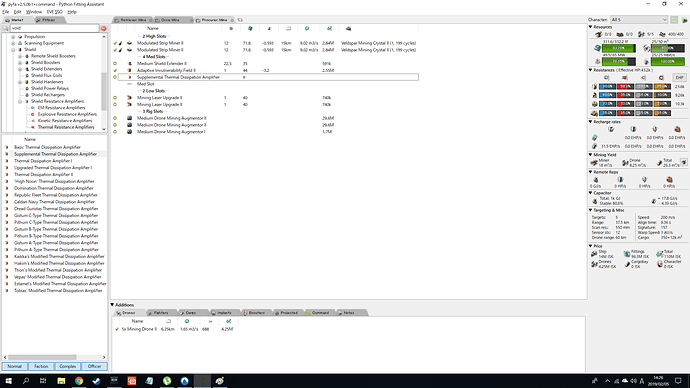 As you can see, max yield fit procurer mines around 26.3m3/s while retaining a 40k EHP. 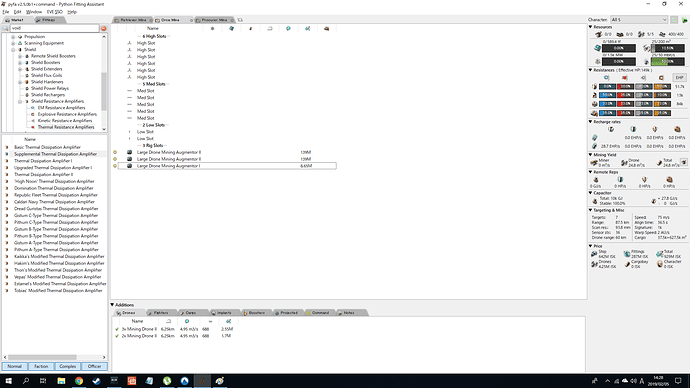 Orca, with very VERY expensive drone rigs gets around 24.8m3/s.

So yes, I dont think an orca can out-do a procurer.

yes that can be, my mackinaw can too, but than if you throw in time in warp you end up losing out.

I found this out when i experimented my first time in an orca with drone rigs and found that even though my mack can mine a bit more a cycle, with in the same amount of time my orca ended up with more ore due to not having to dock for longer periods of time.

yes that can be, my mackinaw can too, but than if you throw in time in warp you end up losing out

It’s called jetcan mining. People do it all the time.

yeah i dont do that on my connection in africa, the cell network internet crashing can run from a few mins to 7-8 hours. learned that lesson to quit running missions,