When doing pickup runs it makes sense to fly the longest distance first, while empty, then to make the pickups on the return. Optimize always routes the stops from nearest to farthest, so adding my return station to the end just makes everything backwards. The route can be reversed by choosing “manage route” and manually dragging the order of each jump, but one click to switch A-Z to Z-A would be wonderful.

Suggestion: Paste signatures into ignore list in probe scanner
Keywords: UI, Probe Scanner
Notes: Many of us use external tools in wormhole space that help keep a list of signatures, but also if you are scanning with a friend and pasting the signatures into corp chat or a spreadsheet it would speed up checking for and scanning new signatures if you could paste a list into the ignored list.

Having gotten used to using the Radial Menu on the Overview, it is missed (particularly when I still try to use it) on things like the Survey Scanner results. There are other areas that I’ve wanted to use, and tried to use, the radial menu and found it wasn’t available. I’ll create other Suggestions as I bump in to them again.

Suggestion: Ability to Display Fuel Levels For Citadels, Refineries, and Engineering Complexes
Keywords: Structures
Note: I am suggesting the OPTION (by the structure’s owner) to display fuel reserves, to advertise that systems have sufficient fuel to not shut down (of course without intervention)

Currently, it is not possible to see the amount of damage a given mining or laser crystal has suffered unless it is loaded. In general, I think said amount should be shown as part of the corresponding tooltip when the cursor is placed over an inventory item. And in particular, it would make telling new and used crystals apart much easier, among other things.

Suggestion: Make the “focus fire” toggle apply to salvage drones
Keywords: salvaging, drones
Note: Let the pilot choose whether wrecks should be handled one by one, or in parallel

When salvage drones are used without explicitly telling the target, all of them will proceed to work on a single wreck - the nearest one, then the closest one after that, etc. If the “focus fire” checkbox isn’t marked in the Drones dropdown menu, my expectation would be that each drone would target a different wreck, yet this seems to apply to combat drones only. Normally, that alternative behaviour would be faster, but it can only be achieved by manually commanding the drones.

“I cannot set the same destination twice” why the hell not? I know this could cause problems for “remove waypoint,” but it isn’t like there is a logical reason for the AP list to be exclusive.

Suggestion: Custom Log Off Reminders
Keywords: UI, Log Off, Reminders
Notes: A feature to set customer reminders to yourself when logging off.

Is there ANY game in history that has such a feature? Not that I’m aware of. Why not have Eve Online be the first!

I can’t tell you how many times I’ve jumped into a clean (or low implanted) clone, only to forget to jump back into my nice training accelerated implant clone when logging out. That’s of course but one example of things I need to remember to do on various occasions when logging out of the game. Did I need to make a delivery? Set up a contract? Send an E-mail to someone or my corp? Check my PI? Pick up launches into orbit that are about to decay? You name it.

It would be so very nice to have reminders we can set up that would appear to us when logging out. I mean I suppose you could go all out and create a to-do list in game with custom reminders and such (one being to remind when logging out), but for now I’d be happy with some function to remind me of important things I need to do before I log out for the night.

Suggestion: Corporation Custom Log Off Reminders
Keywords: UI, Log Off, Reminders
Notes: Similar to MOTD, corporations can set goodbye message to their members or final log out reminders for upcoming operations. Members can opt out of these messages after the first time they see it.

One way to help alleviate this problem would be to use a different text color for the corporate hanger containers. The Inventory window (when docked) combines both personal and corporate hangers into a single window with the container hierarchy on the left. The text for the hanger names are white (or an off white). If the corporate hanger (and all containers within) were say blue, then it would be quick and easy to distinguish which hanger/containers you are using when manipulating your inventory. Also helping with the accidental withdrawal from corporate hangers when you meant to withdraw something from your personal hangers.

Since your ship’s inventory also shows up in this left side hierarchy, I suppose you could also use a different color for it as well. Say green or yellow. 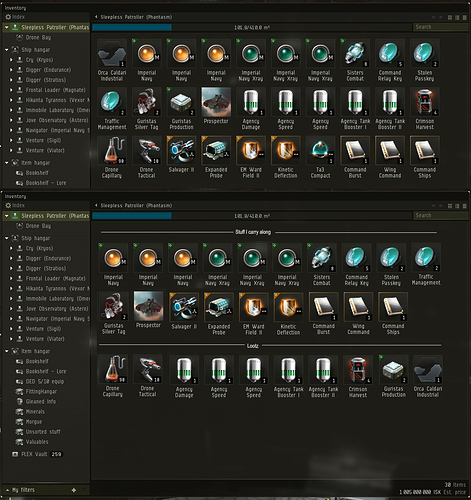 Our small corp of nul bears has been doing extensive research into ship design in New Eden and we have concluded our preliminary findings. In order to excite customer sentiment and drive sales THROUGH THE ROOF!, naval architects from all Empires ought to focus on providing end users with: Ammunition and ordinance bays. A simple reallocation of hold space, akin to fuel bays, with automated loading capabilities once paired with a station container. Magazine fed Electronic warfare modules th…

Suggestion: Update probe scanning interface to remove any unselected sigs from the map while scanning.
Keywords: UI, scanning window
Note: Cluttered systems are harder to scan as a result of the persistence of signatures that are not selected on the map when trying to scan.

Suggestion: Custom camera postioning
Keywords: UI, Camera,
Note: having the ability to position the camera angle as per previous camera iterations made watching multiple wormholes easier by angling the camera to the left or right to take advantage of positional audio.

Suggestion: Correct orbit camera look at behaviour to persistently follow the ship looked at, not look at for two seconds and then stay in place while the ship moves away from the camera the camera position.

Note: Current behaviour seems to allow for a momentary look at a selected ship, but if the ship is moving the camera does not “track” even though auto-tracking is enabled.

The camera appears to require constant adjustment to look at a pilot. Annoying for cinematic purposes.

General feedback:
Please consider revision of the camera code to restore some of the advanced functions… This was taken away and for those of us who produce videos this impacts the ability we had to capture footage of a particular event.

The loss of features being removed and no alternative being replaced are frustrating and pushing certain players away from the game, players who generate content that show off the game and potentially recruit more players.

Suggestion 1: ‘Character sheet -> SKINs’ should list skins not ships under categories, so you could right click and buy, fore example, or at least view skin’s info tab, not ship’s.

Suggestion 2: Add a button to ‘Character sheet -> SKINs’ to toggle between skin collections/market ship tree view. For collection to match market hierarchical view, so it is easier to buy what you’re missing. 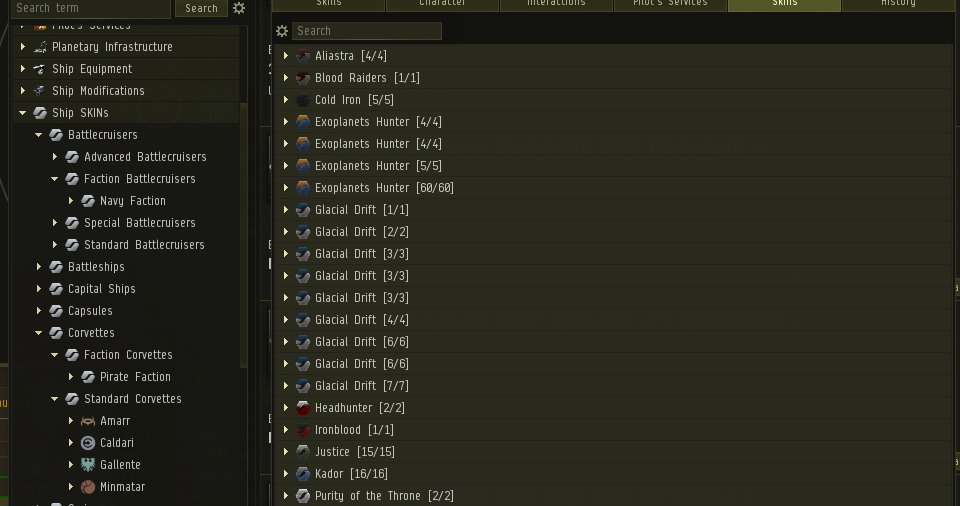 Suggestion 3: Little green checks when a category is complete. In both skin set view and ship type (market) view.

Suggestion 5: Skin Info Tab should show whether I have the skin in my collection.

Keywords: UI, SKINs
Note: Buying multiple SKINs is a real pain. Skins tab opens ships info, not skins info. Categories in Skins tab and in market don’t match. You can’t activate multiple skins now, need to add them one by one, Right-click - > Activate -> OK on each one. If you buy 50 skins (which is a pain in off itself) then 150 more clicks to add them.

SKINs, microtransactions are supposed to be somewhat important for an f2p game, yet collection is just a list. Buying, adding is a pain.

Suggestion: CTRL Del/Backspace should work like in any text program.
Keywords: UI, chat, keyboard
Notes: When I press CTRL Backspace in EVE, it deletes one character to the right in the text, like pressing just Del. This is not how CTRL Backspace or CTRL Del work. They should delete the entire word to the left or right like it is the case in all text programs.

–
Know that this is possible because it worked for a short period of time in late 2015, but was turned off again in late December.

A “Focus to Probes” button in the Solar System Map would be greatly welcome.

In the Solar System Map, the probe widget is hard to select and interact with. It should be on the top layer of the map (in front of all other POIs), with click & selection priority. Right now its super tedious to move probes around.