In essence, design the system so that no advantage is being made by doing a manual DC. You just end up exactly where you were when you DC’d.

I don’t know if this is hard to code into abyssal space or not but it would open up abyssal space to thousands of players that don’t play it now because they have an unstable internet connection.

Suggestion: Add damage bars to fitting window
Kewyords: UI, damage, fitting
Note: Display how damaged the ship is inside station
Add bars around ship window in fitting window to display how much armor and hull damage your ship has sustained. Today you have to undock to see and redock to repair. Another way is to always do a Repair Ship before undocking, even if you haven’t sustained any damage.

Suggestion: Split up the Description tab on items into one tab called Description which tells the player exactly what the module does in only one or two sentences and one tab called Lore/Backstory. Also, rewrite wordy and very long descriptions.
Keywords: NPE, Lore, quality of life, items
Note: One of the hardest things for a new player is when he looks at a module for the first time to try and figure out what it does. The main reason this is so hard is that Descriptions which intuitively would be where you find out what the module does also has a ton of lore and backstory written into them or are very wordy. This is very confusing to players that are looking for answers. 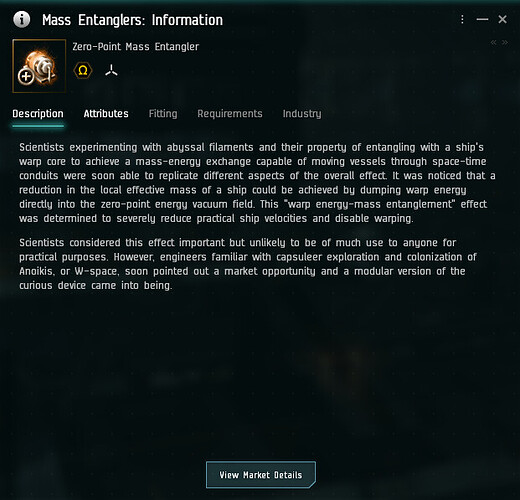 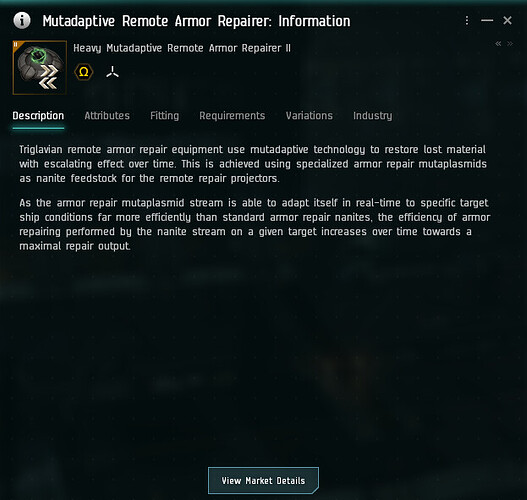 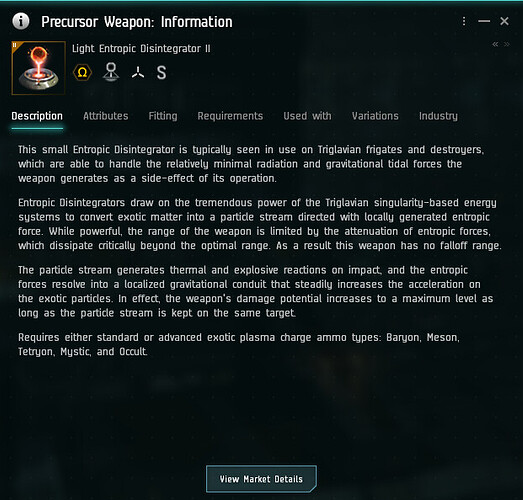 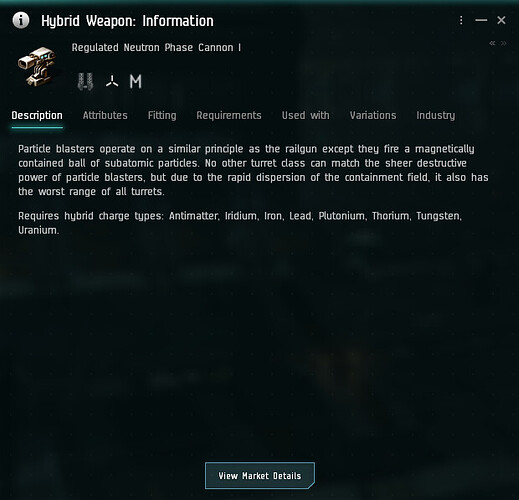 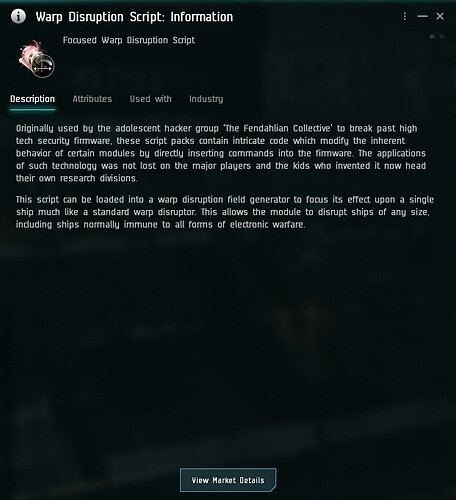 Not all modules are that bad though. This is an example of how easy to understand a disruption could be: 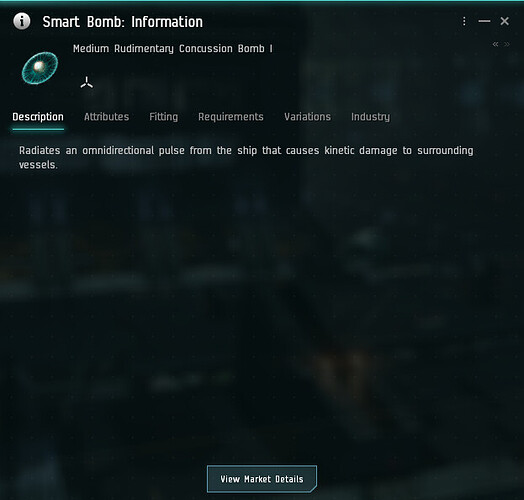 I imagine something like this would be very useful: 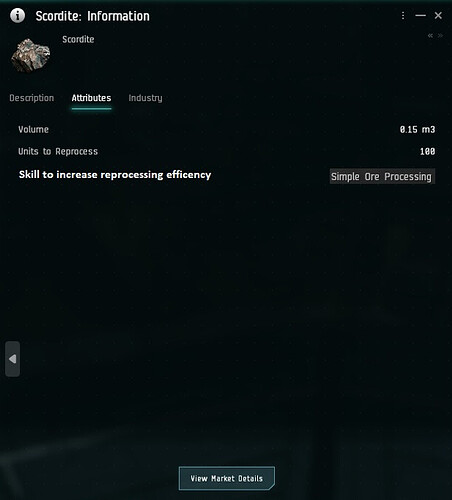 In essence, design the system so that no advantage is being made by doing a manual DC. You just end up exactly where you were when you DC’d.

So all I need is a cheap scout watching my Abyssal Trace from the outside, and if Gankers come to the System and I am going to die on exit with a 99,9999% probability, I just go “freeze” myself and wait until they are gone? Bad Idea.

What they should code in is a feature that if a player in the Abyss loses connection, his Ship does an Emergency-Stop instead of an Emergency-Warp. Because often you can reconnect within a few minutes by just rebooting your PC or resetting internet connection or even make a quick Hotspot with your phone. But if you are still moving in one direction, the Abyssal Depths kill you much faster, even if there is no danger left in the pocket. Thats why I currently never fly manually in the Abyss, just approaching or orbiting any static objects, so I am still doing that when reconnecting. Has saved me billions.

Good point with the ganking.

I think that would be a great compromise. That, you can only reconnect within let’s say 10 minutes and be back where you were. Otherwise, the ship will die. So that gankers don’t have to sit and wait forever and the player still gets a chance to get back into abyssal space if it is a genuine disconnect.

This will also give a person enough time to share a 4g wifi hotspot with his phone if his internet is down so that he at least can finish the abyssal without losing a ship worth billions.

I’d love a filament that would allow you to panic exit an abyssal, but at the cost of your entire cargo, and possibly one/some/all of the mods on your ship.

I d love to arrange the targets on my screen vertically.

The vertical supremacy has an issue though: Even in vertical setting the text( targets name) and symbols( active modules and drones on that target) appear underneath each icon and therefore taking away precious “height”. Leading to me personally being able to have only about 5-6 targets visible in one column vertically, whereas I can comfortably see 10 upward targets arranged horizontally. Plus if there is so many effects on a target, that a second row of symbols comes up its starting to become really wonky.

Can we get an option to have target-text and symbols beside the target-symbol instead of underneath it? ( I would personally even say make that default for vertical target-settup, cause I see no value in NOT having that in that case, but, hey vOv )

copy-pasted from a post of mine elsewhere on this forum

Suggestion: One-button solution to restart PI-extractors with last settings/locations
Keywords: ui, PI
Note: Would reduce the pain of PI, at the cost of lost precision/efficiency of extractor-placement

I d be damned if no one ever asked for this, but my PI doesnt change thaaaat much. PLS save me from all this “find extractor, open extractor-window, stop extraction, start extraction”.
One button, preferably directly in the PI-window, that I can hit to restart all extractors on said planet with the placements/runtime they had last time and I d be a happy bunny.

Why should they remove the single reason to justify the high rewards the Abyssals offer? It’s the basic concept of these sites: Either you win or you die. There is more than enough chance to learn in the lower classes and stockpiles of videos and guides how to use fits that can survive even T6. If you die in there, it was your own fault 99,9%.

I mean, we could come to an agreement if the only way to get such an exit Filament would be to buy it from NPCs and one does cost 5 Billion ISK.

The new Hangar looks awesome, but i don´t want my GPU to go crazy

I have a similar issue, I tune my GFX settings for a glossy looking 60fps when in space. Alas, when docked the frame rate drops to a very very laggy 17fps! The loading is so high my whole PC starts lagging! It’s so bad I now have to use <ctrl><shift><F9> before docking!

A “low quality hangar” tick box would be awesome. Or maybe a “Feature Preview->disable” option that switches the new hangar to the old NPC style station hangar so I can still admire my ship when docked.

Or you exit in your pod.

I’d like to see my current active clone and augmentations among the installed jump clones. It’s just extra time to check augmentations first, and i always forget that, just lost my learning head because i tought i have two empty heads, and i’ve seen one at jump clones so i assumed i’m in the second empty one.

Suggestion: Check volume available in containers when first listed
Keywords: ui, inventory, containers, optimization
Note: Sluggish interface when organizing items into containers. There seems to be an unnecessary delay when dragging items into a container, before the quantity dialog appears. As if it needs to check with the server how much free space is available before asking how many items to deposit. Could this check be done when listing containers in the first place to save the extra round trip? This delay can be avoided by holding shift if you know the quantity, and seems to be cached for subsequent attempts indicating it can be stored client side once known.

Suggestion: Add system security to the location in Regional Market

Keywords: ui, market, system security
Note: Quickly see the security of the system you buy an item from.

When I’m buying stuff from Regional Market, the locations would be prefixed with the security of the system (with appropriate color). Similar to what currently exist with the Personal Assets window.

Suggestion: Bring back the “in system” tab of the personal assets window
Keywords: ui, inventory, personal assets
Note: Personally, I think it was a very useful feature to be able to quickly see in which stations did I store my various stuff in the system I’m currently in. That tab isn’t available since the UI update to me, and I didn’t find any options or settings that could bring it back if it got hidden for some reason. I only see “personal assets” “search” and “asset safety” right now.

Underneath ‘Personal Assets’, is a dropdown displaying ‘All Items’.
If you click this, it shows ‘Region’, ‘Constelation’, and ‘Solar System’.

Before the update I could do it by simply switching tabs within the window, instead of using drop-down lists.
I know it’s easy to do it, but it was easier before.

Suggestion: Have the Paragon daily missions reset during server down time
Keywords: paragon, daily mission, reset
Note: Similarly to the daily log-in rewards, all daily missions should reset during the daily down time of the servers. It’s much better for people who play on a more random schedule, and farming would still be impossible because you could still only do the missions once per every 24 hours on average (or twice within a 48 hour period).

Im not sure if the launcher is on the same code etc as asteroids or others that are on downtime, but the less things tied to downtime the better since they are working on getting rid of downtime.