Suggestion : Trash item fix.
Keywords : Citadel, Trash, Whatever
Notes : In the “Personal Assets” trying to trash items in citadels is not working as inteded or not working at all. Either nothing happens. Or a popup comes on that says “Item is no longer within reach” and then nothing happens. Theese items can usually be moved by asset safety. But trashing something should always be an option no matter what or where it is.

When selecting items in space, the radial line to indicate direction to your selection is gray, which is the same color as the tactical overlay grid. However, one of the major quadrant lines is orange. It would be better to make the selection indicator line this orange color, to easily distinguish the direction of your target from the tactical overlay gridlines. In other words, invert the selection indicator color with that orange quadrant divider line.

And we need a better option for sharing assets between characters/accounts so we dont need to make another useless corporation for this purpose. This would also put an end to the new war dec debate.

This is what the Compare option is for, but yes, that also adds more steps instead of your suggestion.

Maybe CCP could allow containers (or some specific containers) to be shared between characters of the same account ?
Just like a Dropbox shared folder, somehow…

During fights, when you right click on a module, a menu appears, allowing you to Overload the whole rack or Stop overloading the rack. But if the rack is already overloading, why is the sub-menu entry to Overload the rack still clickable ? It doesn’t make sense.

There should only be Overload Rack OR Stop Overloading Rack, but not both at the same time.

In case you dont know. You dont have to use right click menu. Theres buttons on the UI for turning overload on and off.

Have a “leave ship” button in the station, perhaps besides the undock button in the top right. This is because you often have to leave ship to e.g. change clone, and right now it’s just a bit harder to reach.

Show standing on the alliance/corp whose space you are in, so I mean in the top left, you could show blue icon or “in same alliance” icon actually on the system info box in top left, rather than having to open the info on the corp/alliance and see standing. This would just make it easier to guage risk as you are flying through coalition space.

“Unload ship” button, which would unload your cargo for you… instead of having to drag and drop all the time.

Allow to repackage items (like drones) inside Station Containers (or Secure Cargo Containers, for example).

New backgrounds for stations when you dock, I know we don’t spend alot of time docked in station but it would be nice if we got some new backgrounds and bit more variety.

They have not been updated for ages!

Suggestion : Please don’t make the game automatically switch back to the Inventory after undocking from a station
Keywords : inventory, tab, switching, undocking, undock, station, focused tab, focus
Note : this is really annoying, especially if you want to warp to quickly a bookmark (in People & Places)

Let’s say you are docked in a station and that you gathered several windows into one (Personal Assets, Journal, Inventory and People & Places). So now, these windows are tabs, inside one window.

When you undock from a station, it may be crucial to be able to quickly warp to a safe spot, or to be able to insta-undock quickly. But the game doesn’t let you do that.

It currently switches the focused tab to Inventory, even if (in the station) you clicked on People & Places > Places tab.

Suggestion : Add a ‘Notes’ option to all Contacts, including Corporation Contacts
Keywords : contact, standings, note, ui
Note : Currently there is a Notes tab on all Characters so you can record why you marked them as Red/Blue/whatever, but this is character specific and cannot be shared to all who get to share seeing the Contact Standing marker.

Frequently have someone marked Red to the corp, and no one can remember why. It takes a lot of bouncing between alts to find the character that did it, and the note they have as to the reason.

Having the option to have a ‘shared’ note for shared Contact/Standings would make it easier to see “oh, that’s the guy that did [bad thing]” or what have you. Especially given the limited 5-level standing options, it can get muddled who is not a threat unless in a particular situation, or who is a RUNNOW! level threat with both Red corp standing and only one particular character recording the reason why.

Note: When you enter main Hubs chat is totally out of control at times, it would be nice to be able to mute all local chat while your in Jita or Amarr

"once seen can not be unseen

Note: Detailed NPC attribute information available from different sources, like SDE or ESI, but not in-game. Some third-party NPC databases lack details, some may be outdated and ESI based requests are somewhat complicated for casual usage.
In-game Attributes tab for NPC’s can provide easily accessible, up to date information anytime to any interested player. 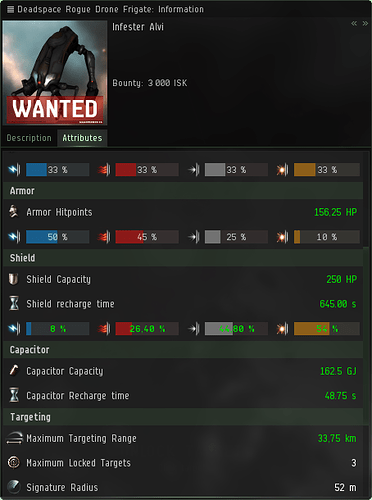 It has become ridiculous to have to visit https://wiki.eveuniversity.org/NPC_Damage_Types or http://games.chruker.dk/eve_online/npc_ships.php to find these informations.

When I select Show Info for a character the default tab differs by character because some people have a Bio tab and others don’t. I submitted a bug report and then felt bad because it was only a little thing.

I’m fairly new to the game, but I’ve noticed this game has a lot of risk vs reward aspects. However, the gankers who gate camp on the other side of a stargate in Low-Sec seem to not be exposed to much, if any, risk at all. It appears they can just sit there all day, waiting for unsuspecting pilots to cross over. The security guns and loss of security status doesn’t matter to them. To counter the lack of risk in doing this, I propose that a pilot who is killed by a gate camp can file a security report with CONCORD at the specific stargate where it occured, so that when other pilots attempt to jump that gate, in addition to the CONCORD warning message you get automatically, you also get a player driven reporting message that warns you of potential gate camp on the other side.

Knowing this could happen, gate campers would then be forced to make a decision to leave to make camp elsewhere or sit and wait on potentially no one coming through, wasting their time. They wouldn’t know if someone came back to make a report on the other side of their gate camp, unless one of them goes through to see if they get the message when coming back through (risky since criminals can be attacked by CONCORD in Hi-Sec).

I would say this could be an option at all stargates, including Low-Sec to Null and so on because a ganked pilot coming back to the stargate to make the report could also be risky. Or it could only be at stargates guarded by CONCORD in High-Sec. A ganked pilot may decide it’s not worth their time and just not go back and do it either.

You can use http://eve-gatecheck.space/eve/ to know if gate camps occurred recently.