I propose that we create a new class of crime that doesn’t follow crimewatch (a set of rules which has nearly eradicated crime in highsec).

I call it petty crime…

I propose that if the thief steals less than 100k, only Corp aggro is received (could do it based on my thief ship value too… guarantee the injured party that the ship has less than 10mil in components)

In this case, the thief would be below the threshold for crimewatch and it would be the purview of the Corp offended to deliver their own justice.

By doing this, we could re-engage the drama of highsec while limiting the risk of those injured in theft and/or encourage winnable fights against cheaply shipped criminal players.

This mechanic could be tailored to bring back can flipping in a kinder mechanic that encourages the kind of interaction that made eve so gritty and engaging years ago.

They got rid of the mechanics you want because they are unpleasant and temperamental to actually deal with. This would be even worse because what is 100k? Nothing in game actually has an attached price.

It has an estimated price. Says so right in my cargo hold.

And, I figure if we reduce the level of injury to a point that’s trivial, we can acknowledge that the actual loss isn’t why we fight, but rather because we want to out of pride.

I think the game needs a few crime mechanics back because the pervasive boredom of highsec is killing the game.

As a new player that has been aware of this game for a long time, I was wondering about this… I had heard this game was unique because it was Pk everywhere… but since joining , the lowest atarter areas have seemed very quiet and safe…

People like me used to make it very interesting.

If you joined in 09, you would have undocked into a crowd of delinquents smack talking each other and picking fights nonstop.

You would have tried mining in a bantam… and figured out that mining into an unsecured jet can
made isk faster.

Then someone would have stolen your can full of ore, leaving you with a dilemma. Take risk for higher reward or do it safe for less isk.

The rest you would have figured out, messily, grittily, and with several ship losses and eventually a victory.

That victory would have felt amazing.

As a gamer that fondly remembers true “all PK all the time” in old MOOs like Asherons Call, I can understand both sides of the “security debate” … and I am wondering if there isn’t some happy and balanced medium that will provide that “edge” without scaring off new players not familiar with the thrills of surviving in pure Pk environment.

The problem is in agreement on where that balance is.

Back in day, there were criminals everywhere trying to take what you had. I loved it… it was crazy.

Some people encountered their first theft, screamed bloody murder, logged off, cancelled their subscription, threw the computer out the window, kicked the dog, and booked a therapist.

Eve back then wasn’t for everyone.

Well, in 2012 they made the risks of criminal play much higher… and have essentially eliminated that element of the game. They increased wardec costs such that all the small flipping corps couldn’t afford it.

So a few sugar daddy’s came forward and spent real money for mass quantities of war decs. And all of the pvp’ers who didn’t quit joined up in the the 5 or so remaining war alliances. Thus, the mercs of the last 7 years were born.

The problem is, fighting each other was just too damn painful and they all knew each other. So they just kept kicking the crap out of the null groups and everyone else… just looking for stuff to shoot to keep the masses happy.

And now the mechanic has changed so that there is literally nothing left to declare war on but shell corps with structures… so even those mercs are quitting.

The problem is still in the question of balance… how much of each side do you need. As of this December, my perception is that ganking is about the only high sec PvP that is still happening on a frequency that is even worth mentioning.

The game feels boring and stale. PvE is all new players see… they can play for weeks and not see a fight, or theft, or even an argument in local.

The game is failing to live up to its reputation and people are getting bored.

Personally, I think we were better off with the chaos before they stomped out the criminals… and turned the highsec war crowd into a 7 year gate camp.

Out of the box question- is there room for player action as a work around to all this? Instead of demanding the mechanics change, what can the players do collectively to change things?

I admit I am new enough here that I am not aware of all the details involved.

I can teach you how to fight.

If you’re patient enough, you can still invade missions and fight that way.

Suspect play, assuming you don’t use alts( like me), is risky but still possible.

The biggest problem is that the Eve community is so unfamiliar with any actual fighting or mechanics from 7 years of not doing it that they’re badly risk averse.

I suspected in a hauler for the entire length of the Jita amarr pipeline about a year ago. Couldn’t get a fight.

I’ve spent hours flying around suspect in a t1 frigate looking for fights. Everyone is so unfamiliar with it that they’re scared of it.

They think hoarding isk is the goal of the game.

Fun is also a worthy goal… and that used to be a more normal perspective.

Thanks for the offer, but as my approach to this game is … for lack of a better term “Meta” , I cant say I’m in a rush to train in what we used to cal Pkk-ing back in my Acheron Call days.

Meta theatrical
Not
Meta Data nor the in-game use of Meta either.

I digress… my mid and short term goals are not focused on fighting… tho I am all for that kind of thing. And will look into it later in the year.

In the immediate term, I am focused on three things…

Qualifying for Full Membership in the groovy Corp I got roped into.

Learning the “culture” of the game and the player community. And getting involved.
Lots of lingo and new terminology to wrap my brain around.

Getting all three of my characters past the fundamentals of the basic PvE starter content, as I have been spending most of my time exploring and learning about the corporation I serendipitously was recruited into. (because some really old school games I was obsessed with like Asherons, I don’t really treat toons 2 & 3 as “alts” ) so I’ve been slacking on running all three past the fundamentals and on to enjoy a taste of the more advanced PvE content. I appreciate and enjoy both PvP in all its variations and PvE with or without sofiticated story telling and in Eve, I am enjoying playing in my own direction as it were.

I’ve only been in game for a few days, and admittedly was impressed with how much there is to really learn in game to understand beyond shooting pirate space ships…
what one can play the game with wise decisions or over eager ones or no real decision making in terms of personal approach to gameplay.

Sorry for rambling… I digress, and refocus to a question I meant to ask-

I think this one is mechanics.

There are people who want to play criminal, the mechanics don’t support it. Yeah, I’ll make some people mad…

But it’s out of balance and it won’t heal without being fixed.

They got rid of the mechanics you want because they are unpleasant and temperamental to actually deal with.

Yup, this and a few other reasons.

The LAST thing we need to do is bring back things we already know failed.

If you look at the continuous growth of the game during that period… I think I could contend that it did work.

Maybe they should go back to the downturn and see if where were any big changes made at about that time that reduced interaction and fun.,

Can flipping never took away play time. It was consensual, emotional, engaging, confusing, and in total, 15 minutes until it was over (that was the engagement timer you had to wait out.

Wars needed a nerf back then, and badly. The week of staying docked was hurting highsec corps and causing them to stagnate once they got to a size that was worth attacking.

I think if they had dropped the quantity of wars a Corp could declare to 1 at a time or maybe given a monthly maximum of wars (say 2)… and left prices the same… the entire PvP community wouldn’t have banded together to pool funds and then spent 7 years decimating the pipeline and hubs in the most uninteractive and unbalanced slaughter the game has ever seen.

Bring back can flipping!

forgive the noobness- but what is can flipping?
is it the same as loot baiting?

Yeah, there are half a dozen variants.

Actual flipping is when I jettison something to create a can… and then take the contents of your can and put it my can.

Then, that makes me criminal. But to take it back makes you criminal.

That being said, most of that community would refer to any jet can mechanics for starting fights as flipping.

One of the main reasons for the suspect flag was it’s simplicity.

Before crimewatch, fights could become very complex and it was unclear who could engage who. 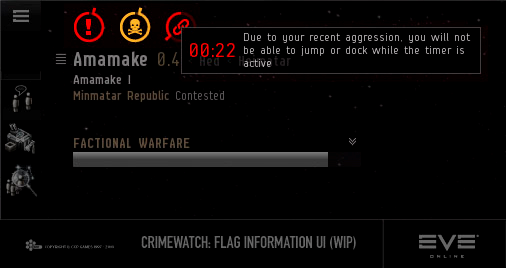 Hi folks. I'm CCP Masterplan from Team Five-0, and I'm here to talk about a significant change to the aggression system in EVE coming along in this winter's expansion. I'm going to cover a bit of history, a discussion of why we're making these...

I agree this has hurt can flipping and has become an obstacle to what I’d call entry level pvp. But going back to the old system brings back old complications.

Maybe we can do something where stealing from a suspect creates a limited engagement rather than another suspect. So when you try to steal back your stuff you are flagged only to the suspect i.e. the can flipper. And only for two minutes.

That would work. While I loved the complexity, ultimately the game’s needs an entry level PvP venue… regardless of the mechanic.

I think it would rapidly start the regrowth of the highsec PvP/squabblefight community.

Then, that makes me suspect. But to take it back makes you suspect.