So which exploit are you using?

For level 1800 you would have done more than 1.83 Million samples. The theoretical minimum average time that you spent with a sample is 10s (because animations, result spam protection etc.).

The biggest compliment any gamer can be called is a “hacker, cheater, exploit user” Because that means people think that your results are so amazing that they can not possibly be done by a human. That the user must be “super human” thus he can not have done it on his own.
So, thank you.

But no, I’m not using an exploit. And NASA would probably pay you a million USD if you made a program to find them. Honestly, I’m sure they are HOPING somebody finds a way to get a computer algorithm to do this.

Also your math is way off. I currently have 5552908 EXP in PD (as of this post). And I get 89exp per sample So that means I’ve done (about) 63, 101 samples. Mind you I haven’t been at 99% forever and the first few days I couldn’t hardly get any right. But given how long I’ve been doing this i wouldn’t bother trying to guess the rate of progress in the beginning because at this point it’s statistically irrelevant.

Even using your 10 seconds per sample That’s 631,000 seconds Or (about) 175 hours. Now it’s probably closer to 300 hours because (like now) I’ll be doing PD while watching a movie/tv show so my attention is divided.

But 300 hours is actually doable. Although a tad insane.

Actually, if you go to YouTube, you can see the tutorial video he made. As I have actually been a live witness as he live streams his PD, his skill,determination, and, quite frankly his freetime, is laudible. Hack/exploit? Nope. Obsessed Oh, yes!

Also your math is way off. I currently have 5552908 EXP in PD (as of this post). And I get 89exp per sample So that means I’ve done (about) 63, 101 samples. Mind you I haven’t been at 99% forever and the first few days I couldn’t hardly get any right. But given how long I’ve been doing this i wouldn’t bother trying to guess the rate of progress in the beginning because at this point it’s statistically irrelevant.

Even using your 10 seconds per sample That’s 631,000 seconds Or (about) 175 hours. Now it’s probably closer to 300 hours because (like now) I’ll be doing PD while watching a movie/tv show so my attention is divided.

I had taken 10s/sample to net get into discussions, about wether or not someone can do it faster than 15 average and assuming you’ve developed certain automatisms that make you faster than the average.

Anyhow, great job. CCPls pay this man or NASA give him a job. He’s gone far beyond the players duty. Also please don’t use his work for developing proprietary software or the likes, that would suck.

As for when the cap sets in… I want to say it’s low. Like 50 maybe 25? I think it’s about the same time you start getting crates that give 2 rewards instead of 1. it’s been so long, I’d need to do it again on an alt to get an exact number.

As for EXP/Lvl now. It’s about 3000 a level. I just got a level but Since I get 89 exp every level it’s saying I need 2923 to next level. I’m guessing that’s from what I went Over from one level to the next.
And that’s another thing, since my accuracy stays at 99% I get more exp for every slide I do (89exp at 99%) as your accuracy dips so does your EXP/Slide.

as for 10 seconds a slide… Big fat depends. I can rock them as fast as about 5 seconds each… but there can’t be a transit. If I’m marking transits it takes longer. So I’d say 5 to 20 seconds depending on how complicated the slide is. Rarely longer than 20 seconds.
At this point I can glance at it and usually instantly tell if there are transits or not. Hence why I can watch a movie and do PD on another monitor. 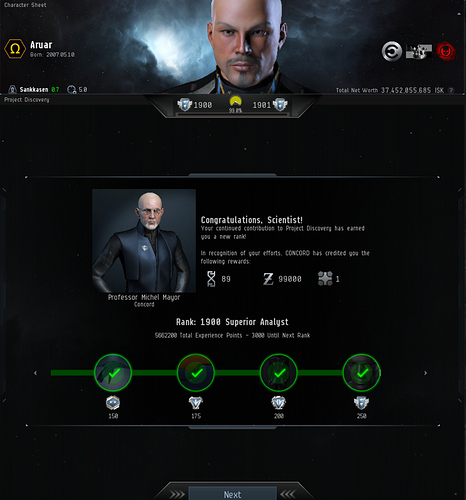 And here is the live stream to level 1900

Congrats. I understand that at level 2000, you get an exoplanet FOB! Use it wisely!

I’d have joined the ranks with Robin Williams long before now in your shoes.

I’m losing the will to live at just over level 270, lol

I’m losing the will to live at just over level 270, lol

■■■■ I’m like level 70. I want the Enforcer (possibly the Marshal) for ninja-running event sites in null, but god damn… so much discovery…

At least make it to 300, that’s likely gonna be the level you have to reach for the Marshal BPC once it’s eventually added

I hope they add the Marshal BPC around 1000 or 1500 so only a few hit the market all at once lol.
But regardless of what level it’s at I can’t wait for it to drop.

I want to hit 2000 here soon. After that I’m not sure if I have a number I’m shooting for… I guess I’m just curious how far I’ll get before they end it.

How long did it even take you to get so far? Just trying to reach level 50 looks as far as the exoplanets themselves…

Heads up, Aruar!! They just dropped some placeholders in the SiSi build where it appears that the PD focus will no longer be on exoplanets. Don’t know when they will officially change over, I’m betting in the spring or late winter. We are going to see how your DNA evaluation skills are, since that appears to be the next topic.

So that Exoplanet car they were going to present you at level 2500 appears to be out of reach…or is it?

@Xandar_Dice My best current estimate is about 400 hours. Mind you a large percentage was spent both doing PD and watching movies/tv shows at the same time. So I was running slower but it kept me from burning out.

@Buoytender_Bob sigh I knew it wouldn’t last forever. Here’s hoping it’s another 6 months or more. I honestly don’t know how well I can evaluate DNA Samples. But to be fair I had never done Light Curves before this, so who knows.

Would be nice, but 300 seems the likeliest level

Definitely gonna be far more of them floating around than before

What do you mean by the sisi build? I can’t find anything to indicate something like that - the DNA References were part of a puzzle left for the monument and conclusion to the first PD, and have been live on TQ for some time now, along with the lists of which people hit levels 1000, 2000, and 5000 in the first iteration.

@Aruar I’m aiming for 5000 because of those lists

@Uriel_Paradisi_Anteovnuecci Looks like I need to at least hit 5000 then! I’m closing in on 2000. If I can get some good time on EVE then I should be able to hit it in under a week. Maybe a few days. 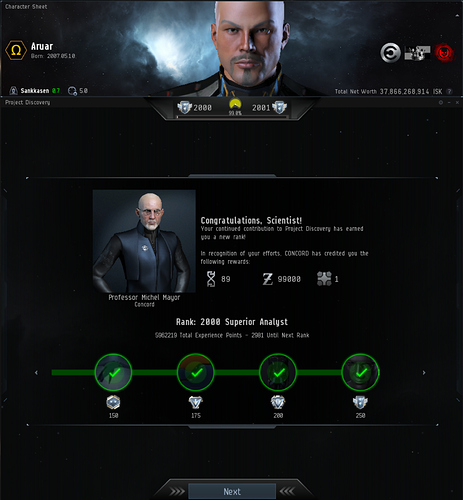 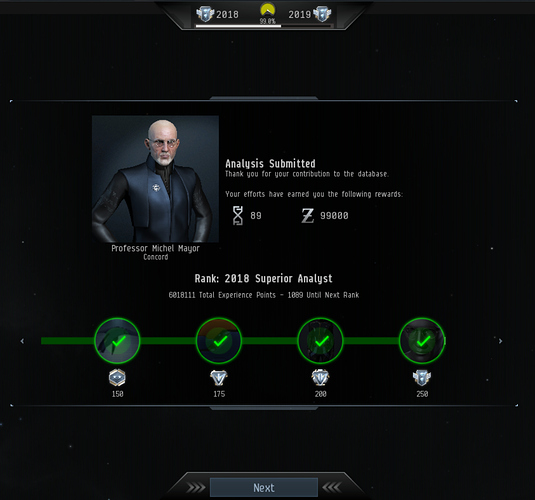