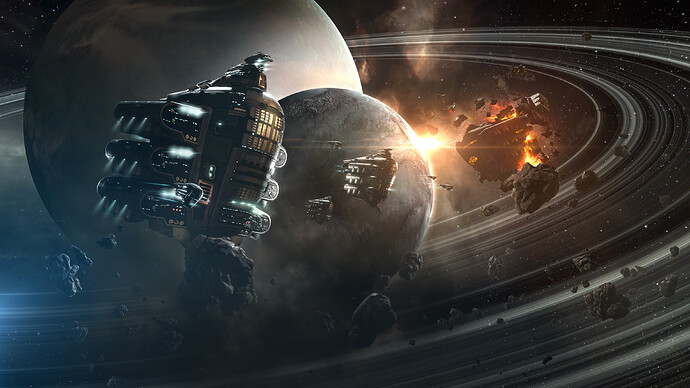 We have just released a dev blog reviewing the work that has gone into rebuilding the EVE Online ecosystem in 2020 and shed some light at items we are planning to be focusing on next in the near future.

Please use this thread for player discussion about anything related to the dev blog.

Be interesting to see what your plans for cloaky camping are. and the personal deployment devices.

rethinking the ice system random respawn needs to be on that agenda. entire regions without ice for a week makes now sense

CCP is never going to fix the ecosystem, if you still allow alts to be use online at the same time. we all knew the Rorqual was broken for years, i could skill into one and 6 months down the line I could have 6 rorqual’s alts and bust out billions a day. but good job just throwing stuff at the wall and looking like devs are doing somthing.

Can you please stop peddling this nonsense? Scarcity doesn’t breed war, imbalance does. If resources are scarce everywhere, then there’s no point making war. You’re using up what you have to get nothing.

I’m really looking forward to the next MER so we can see if these actually had a significant impact.

Keep at it CCP. The more the crybears whine, the more difficult you make it for the grind bears and afk/botters, the better it will be for the game long term.

I’m actually in the process of becoming truly active again simply because of the positive signs and changes I’m seeing. Keep it up!

Address one of the most debated subjects in EVE, AFK cloaky camping, with improved systems to get rid of the frustration of AFK cloaking and its total lack of counterplay without removing the ability for hunters to catch lazy prey, or for spies to be able to scout and monitor systems with strategic value.

As an explorer I sit cloaked while scanning signatures as well as checking local / gate traffic. If you remove that ability then this game will lose even more players.

Further define the differences between the five categories of space and foster geographical variety. The semi-lawless frontier of Lowsec has the potential to become much more than it is now as the Empires’ patience with intrusive Capsuleers in Highsec is wearing thin while wormhole resources will see increased demand.

WTF, how about focusing your attention on Null Sec and their endless supply of ISK printing content. If anything, the attention of High Sec Empires should be focused there.

Seriously, for years now it’s just more and more disappointment from CCP. I’m quickly getting to the point of no longer enjoying this game.

… the Empires’ patience with intrusive Capsuleers in Highsec is wearing thin…

It’s about time! The nerfbat has done a great job whacking some of the worst excesses out of the game in nullsec, but has so far has mostly spared highsec. I’m glad the Empires are finally getting their act in gear and are going to make things a little more difficult for the greedy highsec farmer.

Thanks for the update, and Happy Holidays CCP.

EDIT: P.S. Stop posting devblogs @CCP_Dopamine and go take some well deserved holiday rest. As nice as this is, a devblog like this can wait until a workday!

I should have stopped right there because nothing makes me angrier than knowing you still think that in 2020.

You guys are moving isk making out of null and into highsec/abyssals. As people stop ratting in null (we all saw the november metrics and how everyone but fraternity botters stopped null rating), targets will get harder and harder to find and null sec entities will find it harder and harder to recruit.

People are risk adverse so when it becomes too much of a hassle to make enough money to undock, people will just stop undocking. This isn’t the 2000s anymore. People have a tons of games to turn to.

I came back, like many other people, just for the war. At first I said to myself hey, why not stick around a bit longer. Well, I won’t. And after discussing the matter with a ton of other people around me, I’m not alone.

So enjoy the state of your game when the WWB2 is over and your numbers drop.

I came back, like many other people, just for the war. At first I said to myself hey, why not stick around a bit longer. Well, I won’t. And after discussing the matter with a ton of other people around me, I’m not alone.

You know that line got Darius hired by CCP, right?

We’re now forced to buy plex. CCP are the winners

I’m a simple guy, it’s just too hilarious not to do.

loool scarcity continues for another year? i was allways poor and never had 20% of what i wanted in this game and now this? canceled all my accounts, had enough of your experiments, cya in 2025 or prolly never

Oh, sure, I’m just pointing out that that mentality is CCP’s MO, and always has been.

Let’s start that translation from cfccpian to english, shall we?

“we are going to make ihubs worthless next, break some other mechanics, create artificial limitations which are easily solvable with plex, and ■■■■ you honest players, we’re not gonna forget to buff botters in some way here as well”.

“The utter failure which is MESS system that is preventing all human ratting in nullsec is going to be even more of a stupid tax and deincentivize subscription even harder than it is now”.

We are going to keep buffing botters by increasing the game’s biggest faucet even harder, after everybody and his dog shouted at us to nerf it.

We are going to get back at you with another botter buff of removing drone aggro for good, just you wait! No players allowed! Only botters should remain, get out players. Oh and since we no longer allow you to multibox rat, we’re going to slap another nerf on carriers, and make marauders even more useless than they are now, as we proven players wrong many times when they believed something can’t be done any worse.

Yep, another buff of safe ganktarding with cloak is confirmed. Exactly the opposite of what we needed, usual CFCCP business.

We’ll force everyone to lowsec like we forced everyone out of hisec in 2013 by nerfing the ■■■■ out of it. Get ready for the nerfbat, because subtle changes that actually make sense is a thing of the past! The bot-plex-or-die era doesn’t need to make sense to you, as long as you pay!

We have found that Orcas still work and people prefer them to Rorquals after we nerfed the ■■■■ out of those. Time to fix this and make Orcas useless too! Also, ganktards, the real customers, are crying about Procurer tank, and even though mining in procurer is pants-on-head retarded and more loss than ganktards can inflict with their pigeon IQ, we’re going to nerf that too. You’re a free target, entertainment for the real customer, miner, and you’re gonna pay for this.

All in all, the plan for 2021 is fairly clear. Find the last remaining sources of fun, and whack them, milk whoever is invested, disgust everyone, and offer more pay2win stuff with PLEX in process while laughing in pearlabyssian.

Lowsec is Fine but if CCP wants it to be overly populated so be it.

You have the choice of leaving, if all the unhappy people actually up and left they (CCP ) maybe looking for new employment, but people just bitch and moan and then continue in game.

Well I was barely subbed in 2020 as it is, only plexing on my ISK savings for the war, but after the latest stupidity with drone aggro, honestly, not even war kept me in the game - I logged in probably once or twice in the last two months, and undocked nothing.
So if you want to blame someone for not putting his money where his mouth is, it won’t be me.