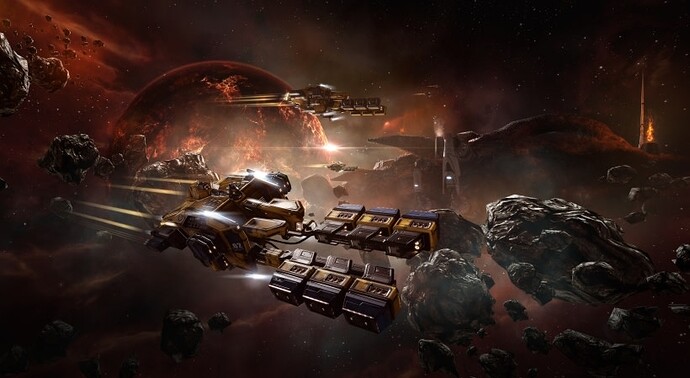 We’re going to be putting the new chapter of the AIR NPE to SISI later today which adds a new Mining experience. Your feedback is as always invaluable so getting your thoughts on how you feel after trying it out and any issues you may find are most welcome by the team.

I’ll add the things here which we are already aware about which you might encounter. If you come across any of these then feel free to mention them but we are aware.

Hope you all have a good time with it.

The Orca kept issueing orbit at 5000m commands every few seconds making it a hell of a clickfest trying to mine the last rock and loot the Dramiel wreck. After some testing i assume its likely that the Orca issues regroup commands once the player moves further than 50km away from it. Since the Asteroid and the wreck are like 70km away the problem appears.

Also I’m not sure if its related to SiSi, but undocking from the AIR station and clicking the ‘Warp to’ button to start the mining part did nothing. I ended up docking undocking and relogging. After the relog I did spam the Warp to button a bit and it finally got me to warp.

Also, the NPE used to award a Small Armor Repairer I, now its handing out a Mining Laser Upgrade I.
Some of the followup Career Agent missions do grant the repair module pretty late. Cashflow for Capsuleers 7 or 8, yet Mission 3 or 4 already strongly advise new players to have a repair module fitted. (Mission description highlights this in red text)

I could imagine that this could disrupt the flow or confuse some new players.

ah, relogging. i merely tried session change by docking and undocking. do you mean quitting the game and restarting though?

yeah, okay, just went through almost all of the ‘tutorial’ until aura started having hissy fits over a skill plan until i bashed it with a wrench a few times…even then she bought the farm once i started a career agent like she wanted. facepalm

btw, i tried to follow instructions to the letter and avoided temptation to go wandering off towards the wreck early on. seemed to be okayish except for the npc’s total emo attitude…does CCP think all miner carebears are the ones that post negative reviews on steam?

as for the missing repair module, i agree completely. i suspect they tried to tack this mystery thing after the bit with the repair and it didn’t work, OR they were just effing lazy and figured swapping out code would be easier.

to give them credit where credit is due, the tutorial does point out the skill queue needing to be constantly training something, but holy cow they sure keep dropping the ball on fleshing that super critically important bit of eve online play, eh? cringe

but, hey, almost 2 decades and the NPE is finally starting to take shape and not just get ripped out and replaced by something NEW AND IMPROVED YAY WEEE

betcha anything that hung “warp to” mission site flashy button is getting bugged by that weird kind of cinematic view of the AIR station right as you undock…did you notice anything weird too about that? it just felt…off…like they tried something cute to showcase the station and make it seem ‘epic’ as aura had this popup dialogue.

right, here’s the workaround for the unwarpable mission site for the mining mystery: just ■■■■■■■ spam the button until it finally kicks in.

Do we need two threads asking for feedback on the same NPE expansion?

[EVE_News_EN_1920x1080] Hi everyone, In today’s news item we talk about the new mining adventure which has landed on Singularity. It extends the storyline established in the new player experience which released last September and delves further into the mystery surrounding the attack of the AIR station. Why not jump on Singularity, spin up a new character and try it out for yourselves? We’d love to hear your impressions and any feedback you may have.

@CCP_Paragon I see you still force unto Caldari new pilots the “stupid” Repair System (armor repairer) skill, when it would be better to offer Shield Operation (shield booster) during the tutorial when introducing the AIR skill plan In previous instance of the NPE, you were capable of giving new pilots the proper turrets and ammo for their race, for example. I don’t understand why you double down on the stupid Repair System, instead of introducing the players to empires’ specificities and lore. Add a voice line to tell the player they are not restricted to their empire’s technologies, if you feel like it. And you have no excuse : later on, I see you have a AIR Caldari Explorer skill plan, so you still have the capabilities to identify race. You definitely could have had a basic AIR skill plan for Caldari repair system, which would include Shield Operation. Please, do it right.

Or chose a neutral skill for that part of the tutorial.