I had a though about Assault frigate changes. One of the ideas I came up with was a new role bonus to make them immune to warp scramble effects. They would still be tackled but they would be able to run their MWD.

The pilot would still have to manage cap and damage income with the MWD active, so, I don’t think it would be super OP.

I figure if Intys can be immune to bubbles that this would be an interesting change.

Also, I don’t think this should be applied to HACs necessarily. The Damage control mod may be the better solution there.

Also, I can’t seem to find the discussion thread on this subject if anyone has a link?

I think this is a good idea.
Currently assault frigates are worst than their tech 1 counterparts, so this might be able to push it.

There is an AF/HAC balance pass in the pipe, with AF speed being a balance concern CCP specifically mentioned in their presentation at Vegas. The A-DU alone is going to reinforce their role as heavy tackle in a way that T3Ds can’t really replicate (at least, for 20 seconds).

Let’s see what they have in store.

Let’s see what they have in store.

Agree. The active tank module they’re getting could potentially give AFs a very useful role in fleet fights, holding tackle where an interceptor would just go poof.

I don’t think it’s going to be enough - don’t get me wrong, the bonus is huge. But the time that it’s active for gives them only a short window to survive, after which they’ll just get blapped.

I know my strategy will just be to have the fleet free-fire on everyone for a couple cycles, and then focus fire after they’ve all used their active module.

The OP suggestion of making them immune to scrams would be exceedingly overpowered; they’d have unparalleled range dictation ability.

The OP suggestion of making them immune to scrams would be exceedingly overpowered; they’d have unparalleled range dictation ability.

Until you get webbed or double webbed. Which is like … every other fight?

Until you get webbed or double webbed. Which is like … every other fight?

In order to practically web AFs you’re gonna need to bring the bling. And AFs are cheap relative to any of that bling.

Isn’t that pretty much the meta now anyway? Garmurs and Orthruses. I am sure many thought the Interdiction immunity to interceptors were going to be OP as well.

It would be a unique ability and their range control is terrible as it is, but, yeah, it could get op.

That just means he will warp out way faster, if he wants to, if AS becomes warp scram immune.

The active tank module they’re getting

Im am missing smth? There will be new module (role bonus) for active tank for AF/hac? 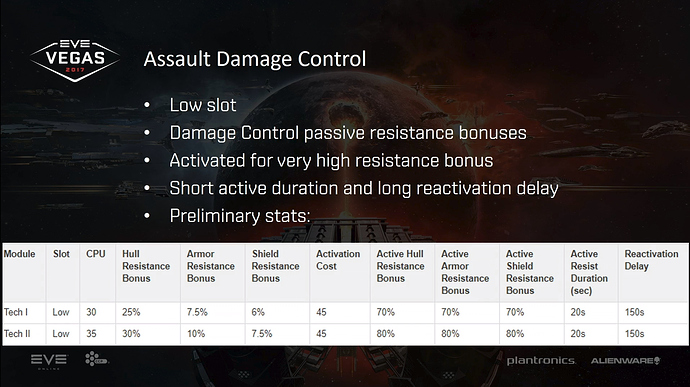 Does it fit into AF only or HACs can use it too?

All Assault Ships, that’s include AF and HACs.

How about web immunity instead of scram. If webs are the leading cause of death?

How about of damage immunity. Damage is a main reason of death?

LOL But isn’t that what the new assault damage control is going to do for 20sec every 2 minutes?

Well to be fair its hard to give traits to something to fulfill an undefined role. Assault frigate whats it assaulting? And saying ships is vague. CCP has to decide what the intended purpose is. Crossing zebras has a nice article about AFs and HACs. Perhaps a general EW resistance bonus including neut resistance. But should one ship be able to tank a small gang and live to recount the ordeal? Hmm. I trained them years ago but for the cost for me personally a lot of things do the same job better. AFs need a job they do best to validate their existence. Im probably just crazy anyway…

AFs need a job they do best to validate their existence

Judging by the very module CCP is adding, their role is “heavy tackle”. Where an interceptor is fast and nimble, able to grab things very quickly, it also pops just as fast.

The AF will be able to take a major pounding with modules such as these.

So where an interceptor works well for roams and gate camps, an AF will work very well for fleet battles where the incoming damage is pretty much impossible to avoid (you can’t maintain high transversal on scattered opponents… at some point in time you will have low transv against something which WILL pop you).

Isn’t that pretty much the meta now anyway? Garmurs and Orthruses. I am sure many thought the Interdiction immunity to interceptors were going to be OP as well.

The AF by comparison is nearly as tough as the Orthrus (especially if you factor in sig radius), especially with this module they’re adding.

Web/double-web either the garmur or the orth and it’s dead, unless they’re not kite fit in which case they’re doing it wrong.

They will still not be able to warp out while scrammed with this idea, they just won’t lose the MWD, but, with scram immunity they will be able to pull range easier and break tackle.