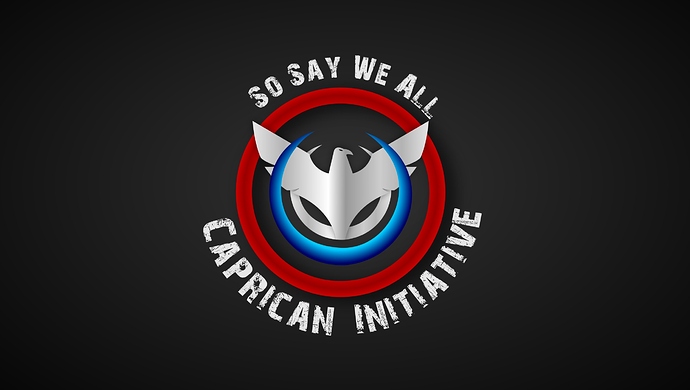 The Caprican Initiative is a casual group that looks to serve and enhance the new player experience during our quest to find a safe haven from the Cylon threat, in the cold darkness of Wormhole space. We are a very casual group that does not take this game seriously. We also understand how frustrating and confusing starting this game can be, and we enjoy helping new players learn it. To us, eve is about the human connections and making friends. In short, if you are a ping warrior or a die-hard pvper, we are not the group for you.

We focus on playing the game as a game.

• Free Skill Books (up to 5 million ISK per book)

• Discord (Required for all members)

What are we looking for

If you have any questions or are interested in making Caprica your home, feel free to PM me or send me a mail ingame.

So Say We All,
Code2200
Caprican Initiative
President of the Twelve Colonies

Recruitment is still open. Contact a recruiter for more details or for any questions you may have.

Recruitment is still open. Recruiters are standing by.

Recruitment is open. Contact a recruiter or join our recruitment channel for more information.

Recruitment is open. Please contact a recruiter or join our recruitment channel for more information. Do note that we do not accept random applications.

Recruiters are standing by.

Recruitment is still open. Random Application to join will not be accepted.

Recruitment is now open again. Feel free to stop by and see about joining us.

Come join us today and fight to save the colonies!

join us today! Recruiters are standing by!

Love the corp - freedom to do whatever I want - no drama, no kids, no BS…

Recruiters are standing by, join today!

Recruit is open and ready to speak with anyone interested.

Recruitment is open and ready for questions.