In case you haven’t heard the news yet we’ve confirmed the devs attending EVE Down Under 2017!

First up there’s CCP Falcon, EVE Universe Community Manager. In addition to overseeing the community for all of CCP’s games, Falcon is one of the biggest contributors to the development of EVE lore and he knows the history of New Eden inside and out as well as being one of the main architects of it’s future. He knows a hell of a lot about all parts of EVE.

Next we have CCP Larrikin, EVE Game Designer. Larrikin’s no stranger to the AUTZ since he hails from these parts and was a big part of EVE Down Under well before he started working at CCP. He’s a great guy who is always eager to talk to the players about their favourite internet spaceship game.

Finally there’s CCP Vertex, Senior Development Manager on the audio and graphics teams. He has played EVE since beta and worked as an ISD volunteer before joining CCP since 2009 where he’s held a variety of roles. This will be his first trip to Australia and first EVE player gathering of any kind apart from Fanfest! Make sure to give him a good welcome.

The devs will be with us over the weekend for all parts of EVE Down Under, giving presentations and chatting it up with the players.

Our CCP guests are super excited to be coming to EDU and we know that attendees will have a great time meeting some new devs and showing them the fantastic AUTZ hospitality.

If you still haven’t got your ticket to EDU or you know people who are still on the fence give them a push and head to: www.evedownunder.com

Get your ticket to EVE Down Under before 1st July to go in the draw to win a Razer Man O’ War 7.1 headset!

Thanks to our friends at Razer we have one of their awesome Man O’ War 7.1 headsets to give away to one lucky spacefriend. All you need to do is purchase your ticket to EVE Down Under before 1st July. If you’ve already bought your ticket don’t worry - you’re still in the running - and in fact you’ll get two entries instead of one!

We’ve already given away some awesome Razer peripherals in the lead up to this EDU and we can’t wait to put a smile on someone else’s face.

Last year’s Sunday afternoon pub quiz was a big hit - many people said it was their favourite part of EDU and best new addition to the event so we’re bringing it back this year! Otto Bismarck has been slaving away on a new set of brain teasing questions and there’ll be plenty of fun and games in between rounds as there was last year. Can’t wait!

EVE server blade up for grabs!

Thanks to an anonymous and very generous donor we’ll have a one of the retired EVE server blades up for auction at EVE Down Under.

These blades were in service from 2006 to 2009 and are a physical piece of EVE Online history. If you were playing at that time your 1’s and 0’s may have very well passed through this piece of hardware. The blade’s inner workings are encased in a hard plastic shell and features a plaque outlining the history of its service which is signed by CCP’s server team. Ideal for display!

Funds raised in the auction will be donated to the charity beyondblue which assists people suffering from depression and anxiety. They provide information and support to help everyone in Australia achieve their best possible mental health, whatever their age and wherever they live. We’re proud to be supporting this great cause again! 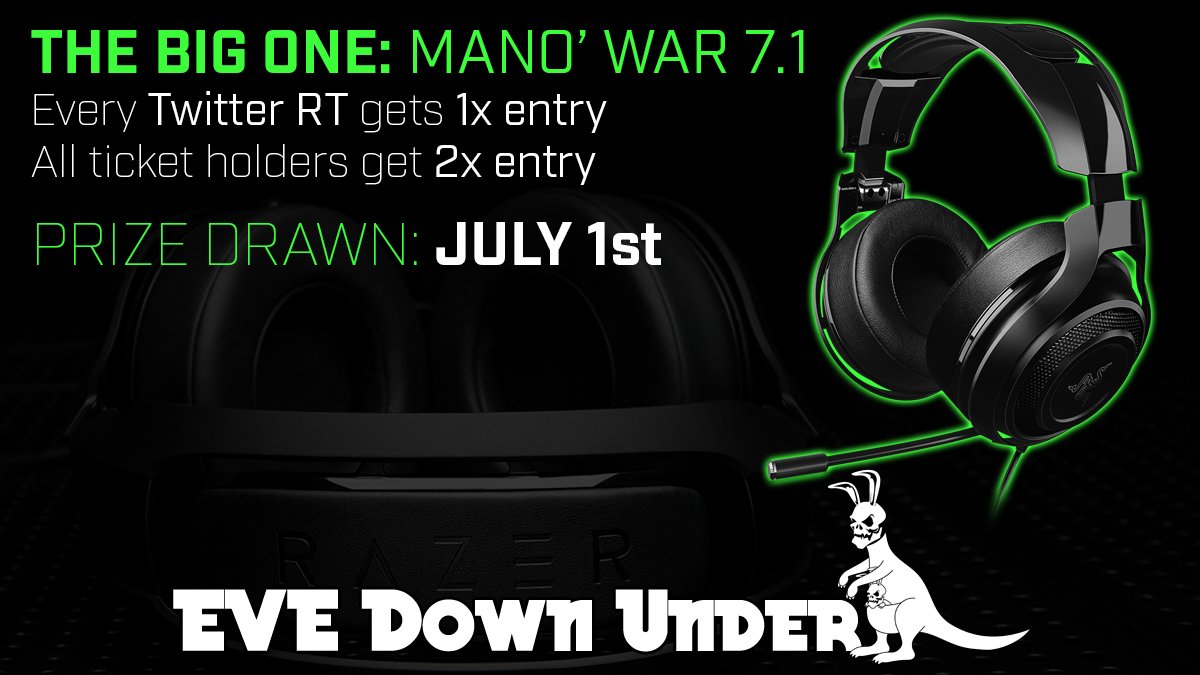 As we get closer to EDU17 we are giving away this @Razer headset! https://t.co/fuHgCIWDsc 28-30 July, Sydney Australia #tweetfleet