Following the disclosure that Lai Dai Protection Service personnel have deployed on the surface of Intaki V, I performed a cursory reconnoiter of the orbital stations and planetary infrastructure of the Intaki homeworld. Anticipating an evolving situation, the present aim is to continue to monitor the planetary system for activity pertinent to the prosperity of Lai Dai constituents.

Local pod-pilot traffic from 0800-1000 NEST was limited primarily to State Protectorate and militia partisans. Intaki V low orbit was clear of visible transport or military vessels. Upwell deployables showed no abnormal activity, though an IHTA Tourism depot appeared to be on remote lockdown.

The Astral Mining Refinery at Intaki V Moon 5 continued to host convoys of Ishukone haulers under escort by Mordu’s Legion sentries. There were no apparent restrictions on transit in-and-around this or any other local facility. 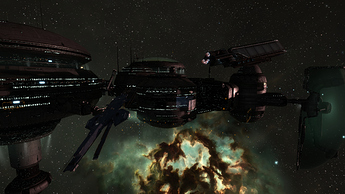 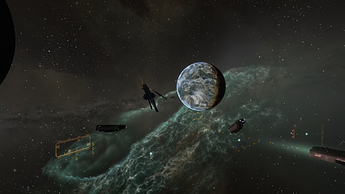 No encounters with LDPS vessels were made, suggesting the planetside deployment is complete.

Lai Dai citizens shall continue to rely on the Service to defend our interests. Good fortune in parting. ⅊

It’s good to see the LDPS takes the lead in providing the security for the system, well known already for harboring piracy and fifth column elements from the State.

I would like to offer my services and Protectorate forces for security of Lai Dai property from a potential attack, would it be from Federal agents, collaborators or well known traitors operating in the vicinity of the system.

Given the public disclosure of updated information linked elsewhere on the net, I felt it was time to issue a clarifying statement and personal petition. In the former, I wish to encapsulate my view of the situation as it is apparent on the surface of Intaki V, with what faculties and limited information is available to me. In the latter, I wish to diffuse any tensions that may arise due to misunderstandings based on poor information.

In addition, I wish to apologize in advance to the Intaki who have been gracious hosts in the passing weeks, as my message is not meant to cast aspersions on them personally, nor their people as a whole. My intent is not to offend, but I acknowledge that my intent may be lost in the clumsiness of my words.

I can only speak as a private citizen of the Lai Dai corporation, and will relieve (with due severance) any crewmember under my command who wishes to protest or disavow any assertions made hereafter.

During the war between the Caldari and Federation, many Intaki, themselves a minority undergoing political suppression, voiced their sympathies publicly for the Caldari. For their efforts, they were exiled from the Federation, and left to their devices, some chose to fight for the Caldari. The story of those fighters is well known to those of us in the State, and their descendents carry on a fine martial tradition even now, here, outside this very station while partisan forces continue to combat over orbital infrastructure.

As I look out on their homeworld now, I see the Caldari that the Federation had hoped to make: economically and politically isolated, a voiceless client. Whether through the graces of the Winds, or Steel and Blood - whatever your belief - could we not say this fate was intended for us as well?

There are values we are taught as children in Lai Dai, much like elsewhere in the State. One such value is honoring our debts. In the matter of debt in shed blood, the Caldari and Intaki share some modicum of remote kinship. This is why I find the activities of LDPS on Intaki V particularly puzzling, even when all that was known was that a deployment of some kind was made. Lai Dai citizens trust LDPS to safeguard our people and property, but it is unknown what people and property are at risk on Intaki V. If the most recent reports are to be believed, these deployments have now engaged in operations on religious and medical targets. I am at a loss to understand the defensive value these operations provide to Lai Dai citizens.

As I have stated, honor is one of our most precious virtues, for it is indeed a commodity; a social currency that appreciates in the execution of honest dealings. It is how we perpetuate our commerce and our ideal. Thus I am further concerned by the cooperation of LDPS personnel with the likes of the Onikanabo Brigade, who do nothing but call our reputation into question. What defense of Lai Dai interests can LDPS not accomplish on their own, after decades of faithful service? Shall we let the Brigade fight and kill the Intaki on their own homeworld, themselves a captive people? How, then, are we different from the Federation?

Let us proceed with the assumption that the information we have on the net is both imperfect and incomplete. The executives undoubtedly make decisions based on much more than we have before us publicly. It is also entirely within the realm of possibility that, this news, being distributed by the Scope, is tampered with in a way that serves the interest of the Federation. While they claim no official sponsorship, it is clear that the Scope is overwhelmingly Gallentean in origin. Be there bias or no, we must entertain the reality that a single source is not enough. So, the first portion of my petition is to Yasda Hadoka of NOHNN, which I have sent already by evemail but will echo here: it is in the interest of the CEP to have whatever information is most accurate with respect to the situation on the surface of Intaki V. Our media are capable of providing a clear picture that does not compromise the integrity of any actual operations in defense of Lai Dai persons and property.

To that end, I make the second portion of my petition (also sent prior by evemail) to @Aina_Yuminoro, Colonel of the 203rd Combined Asset Protection Regiment, to request a briefing on the nature of LDPS deployment and the nature of the threat to Lai Dai persons and properties on the surface of Intaki V that necessitated LDPS deployment. While I understand that operational security is paramount for the units on the surface, with operations now underway I believe it is in the interest of Lai Dai and LDPS shareholders to understand how their investment is being safeguarded for the long-term via these operations. That is, ultimately, what we are trusted to do.

I will continue to observe in my limited capacity, and hope that any doubts that may arise from a lack of transparency, as well as information of insufficient accuracy, will be proven unfounded.