With the Lifeblood expansion Team Psycho Sisters are bringing a change to The Agency user interface.

The Agency will go from being a container for live events to be a container where you can find a variety of content in New Eden. 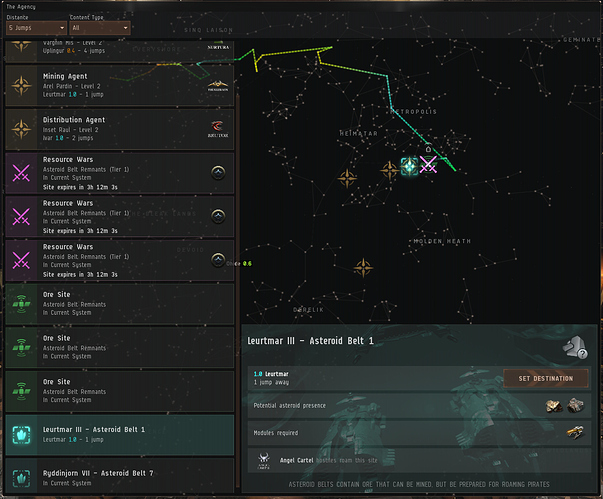 The content included in the initial release will be the following:

Content that will not be included in the initial release:

The goal behind the change is to allow players new and old discover content they can take part in from their current system to x amount of jumps away. In discovering the content they should also be able to learn what kind of rewards or content is possible in the sites.

This is now live on Singularity. You can open it either from the Neocom button or the shortcut ALT-M.

If you find any bugs then please submit them from within the client using the F12 menu. If you are unsure what we are looking for in a bug report you can
read more here - https://community.eveonline.com/support/test-servers/bug-reporting/

We look forward to hearing your thoughts and feedback,
Team Psycho Sisters

When will this be on SISI?

It already is, will update the post to mention that

Oh neat, we get to see agents as well? That looks handy

@CCP_Claymore
Is it intentional it is missing Incursions right now?

We need a way to sort: Range, level etc. (This is like a standard request from us when you all give us new stuff.)

UI takes up a lot of space. It is bulky. We are already fighting for UI real-estate from the other 10k windows in EVE, and it seems like every new window that has come out of late wants us all to be using 60 inch 4k monitors so we can see everything.

In the Content type: Resource Wars shows up twice.

Not a bad start. Needs a lot of polish still.

errrr in the OP

Content that will not be included in the initial release:

Before I begin, this is from Linux user perspective, so things might not be as intended. Judging from posted screenshot though it does look identical.

All in all, long overdue addition to the game. Kudos. But if I were deciding it would all be just part of Map 3.0

[edit] Forgot to ask; now that Agency button opens this, how do we check Agency progression short of logging off?

Can’t you fix the new map first before you throw new stuff on it?

Oh, and already noticed a shortcoming that is pervasive in all new range selectors, but particularly terrible in this new thing: you cannot select current constellation/current region.

I hope the last point gets worked on. I understand that the last point in particular requires a rather advanced state of development of that feature which this first draft is probably not at yet. However, the other 2 points are some rather very basic functionalities that should have been implemented in this first draft.

In that vein: How does that window … pardon, container (yeah, I like to be shipped around like livestock or a piece of trash, too

) select content in the first place? I am in Syndicate and the Agent Finder tells me I have 12 available Agents in the region. Your container, however, tells me I have 0 available and instead sends me to low sec/high sec if I select 10 jumps range, or suggests an agent to me that I have no access to in 3 jumps range.
How does this content censor… selection work? Or is that also just first draft state and will be improved upon very soon?

The filters and stuff for sorting are work in progress. We have some new designs waiting to be implemented, and will hopefully get them on to Singularity as soon as possible.

Resource Wars showing up twice is a bug, will get it sorted.

The map is on our list of things to fix, but this is not the map, although it uses a map.

We have a task on the team and some designs ready waiting to be implemented for the filters. Will pass along your suggestions though.

Information overload is definitely something we are worried about as the amount of content in a single system, let alone constellation or region can be HUGE! This is something we can take a look at when implementing better filters though, maybe we ca adjust this.

Do I understand it right, you give intel away where signatures, anomalies and event sites are located in New Eden? If true, you de facto remove the exploration aspect from EvE! With this it will just be a race to the waypoints not looking left and right.

Nope, this is not correct.

We will not show you what anomalies and signatures are in other systems. You will still have to go and explore to find these things.

So it’s a mixture of improved agent finder and kind of travel log, that’s a good thing. Have to test the agent part, the current agent finder has not the best UI.

Kind of, we would like it to replace the Agent Finder eventually, but that will require us to get Factional Warfare agents and stuff into it, which will not happen in the initial release.

Do I understand it right, you give intel away where signatures, anomalies and event sites are located in New Eden? If true, you de facto remove the exploration aspect from EvE! With this it will just be a race to the waypoints not looking left and right.

I think they are saying the same thing I am. You guys could shrink the UI a whole bunch in the width and length. If the text becomes longer than what the event box has room for, use a “expand” button which would expand the box up so people can read the text.

I would say; if it was up to me. I’d try to get this window to fit stacked in a probe window, wallet, journal etc…

I have stacked my inventory, probe, journal, wallet and personal assets windows, and one of them controls how small the window can go. I’d say figure that out, and get this window so we would want to stack it as well. right now the opening and closing of this UI change will becoming a bother probably to most players (at least it will be for me) as it ends up covering most of my screen real-estate.

PS: I also think showing astroid belts in other systems could be to much. As you will only list one or two here and there. It would be a different matter if static belts where the go to thing in all space and if they had a longer respawn/refill time. Most of that information (maybe not for newbros) is pretty common knowledge to players who have been around a system or three.

Did you even read the following posts? that is not happening

@CCP_Claymore Will this issue be addressed as well?

image.jpg965×258 75 KB
It’s been like this a few agencies ago, everytime you finish the last objective available it just bugs there with the value it had before completion

I did report it previously but seems it keeps slipping away.