For example, if i would like to make a comparison between cruisers and then highlight a specific disparity or strength/weakness with someone, rather than taking a screenshot and then sharing that, wouldnt it be much smoother to just share the window directly?

Suggestion: make sens too all that apparel in eden store. Give us a bar on station, nothing fancy, some thing freelancer style, no walking, and a little mini game, darts or smht ?

Suggestion: Add the full name of cosmic signature to a tooltip

When scanning down the new faction warfare sites, being able to see the last few characters of the signature name is very important. Warping into a NVY-1 site is very different from warping into an ADV-5 site, for example. However, screen real estate in eve is very limited, so you may not have enough screen space to be able to show the entire site name in the probe scanner window (especially if the probe scanner window is detached from the solar system map). I suggest to add the full name of the site to a hover-over tooltip if the Name field of the probe scanner window does not have enough space to display the entire signature name. This will make it easier to identify faction warfare sites when screen space is limited.

Suggestion: Add notes to abyssal modules
Kewyords: ui, modules, abyssal
Note: Let me keep track of why I want certain abyssal mods
I’ve got several cans worth of abysal mods I want for different reasons. A field where I can add a note each one describing why it’s good would be nice. For example being able to differentiate which abyssal scrams I’m keeping because they have good range vs good fitting vs ones that are bricks but have 3 scram strength.

Suggestion: Add industry slots to character portrait on login screen
Kewyords: ui, industry, login screen
Note: Make it easier to see which character has unused industry slots
This would be nice as it would mean I don’t need to log in to each character individually or find a tool to figure out which character has unused build/research/reaction slots. This could also potentially be expanded to market orders and contracts as well (maybe a drop down or as hover over text if screen space is an issue). Alternatively something similar could be achieved by letting a director easily check the status of industry slots of other characters in their corp in-game.

Suggestion: Toggle to fix login portrait positions
Kewyords: ui, login screen
Note: So I don’t need to guess which character will be in what positon
When rapidly swapping between characters it would be nice if I could always know where each one is on the login screen instead of it being different every time. Making this a toggle would be better as it both allows players to reposition characters (if though a somewhat obtuse methodology) as well as letting people who like the current system keep it. Even just fixing them permanently without a toggle would be preferable to the current system though as it make the login screen more reliable.

The first portrait is always the one you just logged from.
The second is whatever will be the previously logged out char (the one that used to be in slot one)

As of now, I need to have the Search bar (top left corner) visible to press my shortcut and make it focused. I feel we already have plenty of info in the top left, so I like to keep the Search bar closed. It would be nice, if the same shortcut key when pressed would open the bar first. A second keypress would then make it focused. That is the minimum of my suggestion.

But if we were to go all out, and add a third keypress, it would be awesome if the Search bar closed again. I guess that raises some issues, like what if another window was focused, and the shortcut key was pressed (3rd keypress), should it then close the bar or make the bar focused? I don’t have the answer, but suggest just letting it cycle through these three modes. 1 → 2 → 3, rinse and repeat

I see no problem with this, if the situation is hopeless, you are STILL going to die.

Suggestion: Have Pointer Window properly point to the “E” on the top-left of Neocom when applicable

So I’ve been trying to help several of my local friends get into EVE, and there’s a particular UI issue I’ve been having with the Pointer Window function. When it requires the “E” in the top left of the Neocom to be clicked first, the blue box with the information is too large, and the actual ‘arrow’ on the side of bluebox tooltip is pointing at the character portrait instead of the “E” above it, leading to them opening their character sheet and not understanding why the info I linked them isn’t there.

The new Hangar looks awesome, but i don´t want my GPU to go crazy to try and achieve those high FPS (240Hz Monitor). Though i already most of the times lock my fps to 150ish, and there already seems to be some sort of “FPS Limit” in the Hangar, i would love to have the option to force the HANGAR FPS down to 30 or something, and save me lots of electricity Money (we pay 50+cents/kwh for electricity in Germany).

The GPU/Watt Usage outside, in Space, in Fights, is barely half of what i burn at the moment. IF you cant implement a seperate FPS Slider, at least, return the option to JUST use 2D Pictures when switching Ships, or just a simple Hangar Picture and no 3D Animation at all, like it was way way back a long time ago.

This would save me more than a hundred Bucks per Year, not even joking, thanks.

(looking into Rivatuner Shortcuts at the moment to use a hotkey to force 30fps and off but well, in 2022, it should be in the game to be honest

Keywords: UI, Cursor Customization
Note: For some too small, hard to see sometimes depending on scene.

I use an orange Cursor Pointer in Windows, double the Size of the std. one or more - i would love to have some this possible Customization in Eve for the Cursor. Only changing the color from the usual black/white to something like neon green/blue or orange, would significantly be better. Maybe pack it into the already available Color Themes, though that would maybe not be liked by others.

But yeah, at least a different color should be possible if SIZE is too much to implement. Thanks.

Suggestion: Add notes to abyssal modules
Kewyords: ui, modules, abyssal
Note: Let me keep track of why I want certain abyssal mods
I’ve got several cans worth of abysal mods I want for different reasons. A field where I can add a note each one describing why it’s good would be nice. For example being able to differentiate which abyssal scrams I’m keeping because they have good range vs good fitting vs ones that are bricks but have 3 scram strength.

Suggestion: ^^^This^^^ but for ships.
Keywords: ui, fitting, ship
Notes: It would be nice to have notes indicating what “my” use for the ship is intended vs. what is shown to the world.

Having to change the name before undock and then change it back when returning is annoying. Similarly simulating the fit for 3-4 different ships of the same type looking for a particular one is annoying.

Suggestion: Add “stack all” button to inventory and item/ship hangars.
Keywords: ui, hotkeys, inventory, windows layout.
Note: Functionality hidden on right click menu, could it be added next to/before the icon/details/list selection which I rarely ever use.

This means we for example cannot select a warp target, decloak and immediately warp to that location, but first have to decloak, then rightclick the warp target and warp, which is annoying, takes extra time and is prone to mistakes.

Rightclicking locations from other windows like the overview or rightclick in space menu does allow players to keep using keybinds. It would be nice if the Saved locations menu could do the same thing.

Suggestion: Allow us to filter by rat color in overview settings
Keywords: ui, overview
Note: Useful for showing only rats that are hostile or are friendly

I think it’ll be useful to be able to filter out rats of a certain color - e.g. only show rats that are red (and therefore will shoot you) and hide rats that are white / blue - similar to how filtering by player standings color.
For example: if you warp to a pochven wormhole with no trig standings and there are 20 red triglavian rats on grid, you’d want to know that so you don’t stick around for them to kill you. If you then splash into pochven and kill a rogue drone (i.e. your standings with the trigs are now +0.01) and you then splash out of the same wormhole, the same group of rats from before would be white and will not shoot you, therefore you no longer need to see them on that overview tab. Similarly, you may want blue rats to show up on a friendly overview tab so that you know that the diamond rats on grid will give you remote reps if you’re attacked.

In PVP, it is quite common for a player to want to run overheated repair modules for just one cycle not to overrepair. Since the UI isn’t always responsive, it might take a few seconds until one can set it back to overheat state and run again. Having some way of setting the module so that the overheat state wouldn’t turn off after stopping the module would be nice.

IMO this might improve the PVP for considerable amount of people based on how much players run into this problem. Especially for solo and small gangs + significant part of FW.

Suggestion: Ability to rearrange the position of modules before you undock, preferably an ability to save module placement templates. <3
Keyword: quality of life, fitting, modules, gameplay,
Note: Whenever you have to jump into a new ship and get to the fight fast one of the most time-consuming things to have to do is rearrange the module positions to F1,F2,F3 and so forth. It would be awesome if you could be able to prearranged this in the station or even better have a template saved for where the modules are positioned for X ship. This should go hand in hand with the fitting window.

So for example. You choose X fit. Then Drop down menu to choose X module template position for said ship.

Example: Rearrange inside the station: 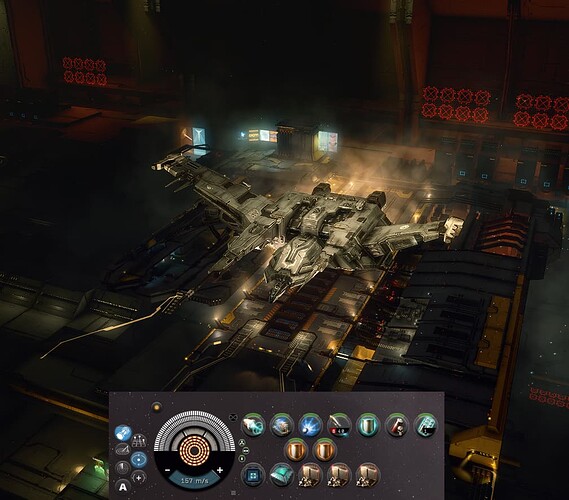 Keywords: planetary industry, PI
Note: helps when you have multiple launchpads to drop in lower tier PI into planet.

This would allow the more efficient use of an industry based clone with a full set of the Zainou ‘Beancounter’ implants, instead of having to choose between some of the options. This could become a set like other implant sets that are available.

IMO not being able to have these implants together just uses an additional clone spot, it does not change the gameplay or introduce any significant difference in risk profile.