While a larger overhaul of the item sorting options is overdue (imho), this is a recommendation to greatly improve the ability to sort through and manage large quantities of items and make the 'group’ing of items much more useful and better group like-items together for sorting purposes – mainly for blueprints, ammunition ore, and subsystems.

Due to the limitation of alphabetical being the main sorting option, re-ordering the group tags to be a (group) (type) (thing) order would solve very many problems, as opposed to the current somewhat inconsistent (thing/type)(type/thing) (group) for those key words. In other words, doing for ammo and blueprints what has previously been done to rigs to help them stay sorted when you have large quantities of various items.

To illustrate with an example

It should not end there either. Ammo of the same kind should be grouped together. 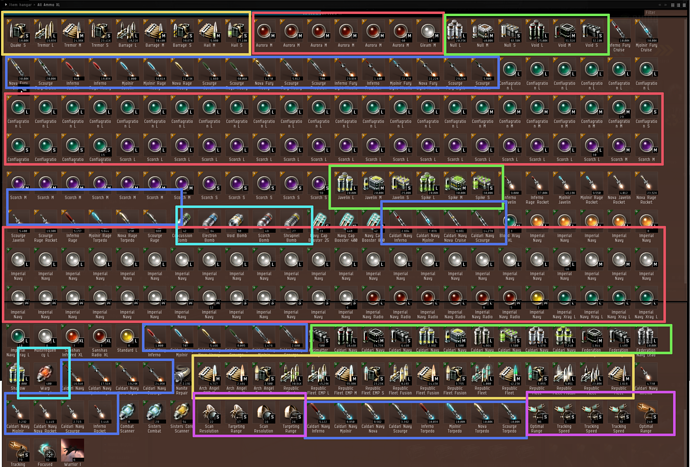 This is what “tiericide” does, and they work through these a group at a time. There hasn’t been any in a few months, but that’s largely because everybody is working on the expansion.