tl; dr, imagine armor tanking with a 5 + 1/4/5 slot layout, this post made by “literally every other armor HAC” gang.

Let’s start by looking at the Sac’s description:
"Khanid’s engineers have spent months perfecting the Sacrilege’s on-board missile launcher optimization systems, making it a very effective assault missile platform. In addition, its supremely advanced capacitor systems make it one of the most dangerous ships in its class. "

So the Sac is supposed to be a HAM brawler with strong capacitor warfare abilities, and looking at the bonuses we can also infer that it’s supposed to be tanky. But the current Sac doesn’t live up to this role. Every other armor HAC, even the Muninn, gets at least 6 lows. The Sac needs that 6th low to be viable in any kind of fleet warfare, especially when you consider the HAM Legion can get 8 low slots. The only things it’s good for now are long-duration PvE where cap boosting isn’t an option, and niche solo tactics that use its abundant mid slots for control.

I suggest that the Sac should have a 4 + 2/3/6 slot layout with 7.5% per level to rate of fire and damage, which will increase its effective launchers from 8.3 to 8.8 (if i mathed right) and let it fit a ballistic control + another neut. That would make it more viable as a HAM brawler, even though the Legion would still be better in most respects.

"Khanid’s engineers have spent months perfecting the Sacrilege’s on-board missile launcher optimization systems, making it a very effective assault missile platform. In addition, its supremely advanced capacitor systems make it one of the most dangerous ships in its class. "

nothing in that description says what you say it says…

I wouldn’t rely on flavor text as a justification on how to balance a ship.

What the hell are you trying to do with it? Oh i see:

The Sac needs that 6th low to be viable in any kind of fleet warfare, 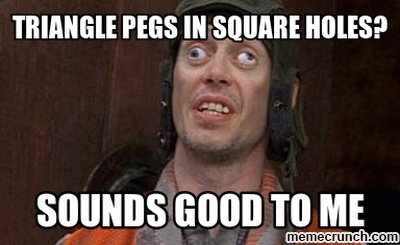 First: Sacs won’t ever be especially useful in proper fleet compositions because they use missiles instead of guns.

Second: when you consider the need to fill the massive resist hole that the Muninn has (while the Sac doesn’t really have one), the Muninn effectively only has 5 lows when used as an AHAC, which puts it on par with the Sac. (HAM Legion doesn’t suffer from this, but comparing HACs to T3s is always a sketchy proposition.)

Third: Have you ever actually flown a Sac? The thing is a right proper beast in terms of close range brawling. A mildly blingy fit can sport a good tank and buffer; do decent damage out to 28km; and run tank, tackle, and a medium neut all while cap stable. Its DPS will never be stellar, but it’s a fantastic ship to get in close and pin a target down while other ships pound on it from range.

-1 to your proposal. I appreciate your creative thinking with the 4/2 high slot layout, but it’s not necessary, and if you really want HAMs and dual medium neuts on one platform, there’s the HAM Legion.