It has come to my attention that you can no longer trade plex for character transfers (it’s been a long time since i traded toons) i will be putting all Bergmann’s up for sale until the end of the month and then sell them to the highest bidder, original price was 12 billion (since i have the plex at hand) however due to the cost of the transaction fees, the price would have to be slightly higher.

The screenshot below for authentication, for some reason the third part eve app, is not showing the SP this toon has 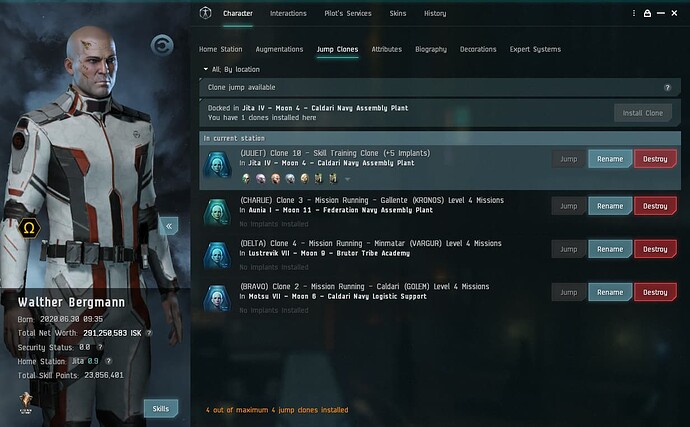 can not see any skill in link

It’s an issue with the program tried to reset and send a support ticket in to resolve, hence the screenshot to verify the skills all my other toons are working as intended it’s just this one for some reason

the skillset is exactly the same as Tobias and Nicholas

Again i apologize, but i have deleted my information on the skill board to try and re-capture my character’s skills, but it still shows up as a load of zero’s.

Hence why i have linked a screenshot on this thread

how much do you want now?

Minimum start price is stated above

Thanks Your the highest bidder, at 12.5 billion, you have until the 24th it’s getting close to the buyout

I’m at work now, so I’ll send an email with ISK as soon as I get home.

Can Confirm Toon is on the account.
Thank you nice doing buisness with you.