At approximately 02:30 this morning, an ARC Hive patrol fleet warped into a group of 25 Vigilant Tyrannos battleships during routine operations at the Redoubt Hive complex in J174618. The entire fleet immediately discharged their main weapons against a member of the patrol upon landing, before destroying his capsule and collecting his corpse. Each vessel was observed to be heavily damaged. 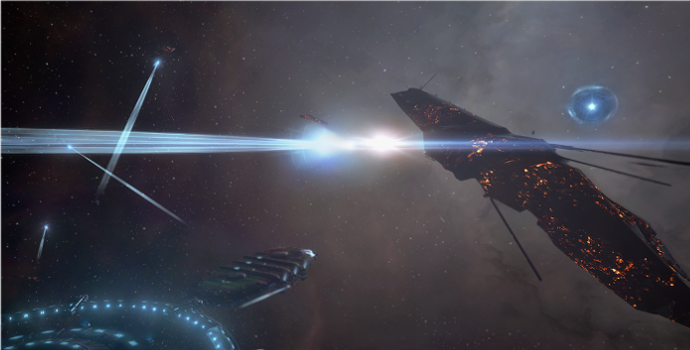 The Hive patrol had previously spotted four badly damaged Drifter ships entering the wormhole system. However, this was not considered significant until discovery of the larger fleet.

This constitutes the largest concentration of Drifter ships in a Hive system spotted to date, following the Tukoss broadcast. Additional damaged Drifters appeared to be patrolling independently, bringing estimates of Drifter forces in system to forty vessels. There were no signs of other, non-Drifter forces in the wormhole system, indicating that the ships were damaged in fighting in either other wormhole system or elsewhere in known space.

The ARC patrol regrouped, scouted its way through the Hive, and successfully completed its objective of engaging the Hikanta Tyrannos. The principal concentration of Drifters was not engaged directly. ARC is preparing a follow-on fleet to neutralize this concentration.

ARC continue to pursue the Drifter with intention of killing them , when one is on campaign of genocide you should expect resistance.

Any hypotheses on what has casused the damage or why they haven’t been repaired when you arrived?

Well Drifter Battleships on deployment haven’t ever been observed repairing armor or hull, so that seems to fit as a reason for why they weren’t repaired. As for why they would need those repairs in the first place, we currently have no clues - whoever their attackers were, they were capable of inflicting catastrophic damage to a huge number of Drifter vessels, clearing their defensive shroud and leaving every one of them in a heavily battle-torn state.

My personal question is whether these attackers would be someone we’d want to work mutually with, or if they may end up being someone I’d want to side with even the Drifters against

Or could there be something/someone even more powerful than the Drifters that we have yet to encounter?

ARC continue to pursue the Drifter with intention of killing them , when one is on campaign of genocide you should expect resistance.

I believe there is more than sufficient evidence that the Drifter threat warrants some measure of resistance, `less they continue to assassinate world leaders and attack empire navies.

I sincerely hope that whoever attacked this Drifter fleet, will not suddenly show up and suddenly start attacking us. It will be a hard battle to fight both the Drifters and this unknown attacker, especially if there have to weaponry this much damage to a fleet.

No wreckage or other signs of battle? Does that suggest that these ships may have travelled to this site from a battlefield in another site / wormhole?

I don’t see any reason for alarm. All this means is that someone had the capability to almost take on a Drifter fleet. Not even enough to take them out.

Probably just a bombing run or something, a few bombs short of actually being enough. Happens all the time in capsuleer combat.

I sincerely hope that whoever attacked this Drifter fleet, will not suddenly show up and suddenly start attacking us. It will be a hard battle to fight both the Drifters and this unknown attacker, especially if there have to weaponry this much damage to a fleet.

My early theories may not echo those of my peers, but I suspected that this could have been the work of the Guristas, Blood Raiders, or quite possibly even Sansha. All seem to have enhanced their logistical capability in the past year or so (Sansha being the notable exception). It was bound to occur that they’d eventually meet the Drifters in combat eventually.

In fact, I’m surprised Sansha has not attempted to steal Drifter technology for himself yet.

No wreckage or other signs of battle? Does that suggest the these ships maybe travelled to this site from a battlefield in another site / wormhole?

It’s possible. When we arrived, they all seemed to be collected in a single group and showed evidence of being coalesced into a single wing/fleet. They moved together as a group, so it’s likely that they were all attacked as that same group.

What I find more curious is they made no effort to conduct maintenance or repairs and continued on their patrol despite the heavy damage. We also do not know how many had been destroyed, if any, prior to their collecting in that shattered system.

Your right, this just had me in a few sec of panic. Your suspicion about it being the work of ether the Guristas, Blood Raiders or Sansha does sound to be the most logical explanation.

In fact, I’m surprised Sansha has not attempted to steal Drifter technology for himself yet.

There are few obvious culprits to this:
SoE, The Sansha and CONCORD.
We know - or, at least there is compelling evidence - that Sisters and Sansha have clashed with Drifters and Sleepers in the past. Sansha are known for their large fleets, and I wouldn’t consider it impossible for them to take on even 25 drifter battleships. Though - my two cents are that these ships most likely have not been attacked all at once but they have been individually or in small groups damaged elsewhere and regrouped in that particular hive for some reason.

Lastly, CONCORD has been rumored to be working to be able to interfere with Drifter technology, and this might be the result for that.

So, some thoughts and explorations.

In the first place, one of the noteworthy details about Drifter Hive forces is that they tend to be much smaller than you’d otherwise anticipate; the patrolling forces number somewhere around six to eight A/A Drifter battleships, a comparable number of patrols of pairs of Lancers, and so on. These are usually sufficient to dissuade casual exploration. During this operation, we encountered at least forty in the system. Most were damaged, but a small number were not.

A growing theory has been that Drifter wormhole-generation systems allow for three-singularity wormhole systems, allowing point-to-point transfer between A-B, and A-C. After all, the Hives all appear to be outlying defenses of some sort. In this case, it may have been that damaged Drifter forces retreated from k-space to repair and resupply in Hive systems, or may have come from unknown wormhole systems, or may have in fact been pulled into the Hive systems to engage there. Either way, bombs, smartbombs, or hostile environments are certainly all on the list of potential damage sources, whether due to hostile action or exposure situations.

Indeed, it’s also entirely conceivable that this is a fleet returning from extended duty, and Drifter ships require rather more maintenance and repair than we’d been given to believe.

As you would imagine, right now, we have many theories., but few facts.

What we can say is the damage was relatively recent. Drifter Doomsdays were spooled, and the fleet appeared to be taking a defensive posture in the Hive complex, requiring more careful movement on our part than normal. The main fleet, 25-strong, was not the only location where damaged Drifters were found. Undamaged and damaged Drifters were patrolling singly, in pairs, and in trios, leading to greater average force concentrations than usual, and contributing to the 18-kill patrol, whereas most Hive operations net four to eight Drifter kills.

As you can imagine, our standard fleet doctrine is suitable for engaging up to four Drifters at a time, but can’t engage Drifters in the dozens. Our Throne Worlds Campaign doctrine can engage those counts, but runs into issues with a Wolf-Rayet system, wormhole mass limits, and so on. Current plans are either bombers or an armor-based Ciniel-style doctrine.

Also, on Tom Horn; he’s a silly man. Best to ignore him.

In any case! We’ll see how this unfolds. In the meanwhile, ARC will increase surveillance and maintain its operational tempo.

A report has come in indicating a comparable fleet in H-ADOC in Curse; approximately 25 Drifters, damaged, patrolling the system.

Other threads makemention of Valkyrie pilots losing contact with their carriers while on Drifter WH ops. Could be the Valkyrie or Schism hitting the Drifters?

Also don’t the latest fighters include Drifter tech? It may well be the third party that’s providing this tech to Schism/Valkyrie ‘harvesting’ salvage for parts.

The H-ADOC Drifter fleet has been destroyed.

A lengthy observation was conducted by pilot Nomistrav and an agent in the League of Svelte Men (SVELT) as the Drifters gathered capsuleer corpses from a Triumverate (TRI) staging point. Following this, SVELT and TRI dispatched the fleet. SVELT used repeated solo bombing runs to destroy many of the Drifters, as the Drifters appear to not have encountered bombs on a reliable basis before, and so had no effective counter. TRI then finished off the last Drifter with fighters.

Drifter fleet seemed particularly keen on scanning the S-E6ES gate in the system. Occasionally, they would break away to attempt to collect corpses at the Triumverate staging point. In this, they would dispatch intermittently, one after the other. This formed a line of Drifters leading from the gate toward the Citadel as they approached. However, they would occasionally warp back as a group toward the gate and resume scanning activities. This lasted some time, but eventually they would begin to approach the Citadel again.

Evidence that they were attempting to gather corpses was prominent in the fact that they were approaching at slow-burn velocities (approx. 235m/sec) as opposed to attack or flank speeds. The fleet was non-violent toward ships in proximity, such is typical of Drifter behavior in K-Space. However, they would freely engage any ship that attempted to attack them, as one pilot found out quite quickly.

We can now confirm multiple damaged Drifter fleets have been moving.

Despite the destruction of the Drifter task force in H-ADOC, there is a 30-strong Drifter fleet in Rens.

As Miss Priano said - I’m headed there myself to run some tests and to be there in the case of something else happening. What might be the reason for all of this?

Reminds me of that time Sansha fleets did the same thing. perhaps something similar.