Yesterday I encountered a destroyed Triglavian Collective frigate in one of the five Drifter Hive systems (J164710) for the very first time. It was a quiet and lonely wreck, marked by its supposed killer, a capsuleer named Tora Hi. It was drifting between the rubbles of one of the Hive’s anomalies. - Was that a significant finding?

Given the fact that Drifters, who are assumed to use those five Hive systems as operative staging areas, are considered high value targets to the Triglavians and vice versa, one could muse that the so far quiet Hive systems will play a more significant role in the future. For some time now, a significant increase of the Hive systems’ wormhole formation rate has been observed. And it is still unknown, how Triglavian forces identify their foothold systems, though efforts have been made already. It is also unclear, how the Drifter forces coordinate their resources in the ongoing conflict with the Triglavian Conclave.

I propose that we look deeper into the relationship between the greatly increased number of unidentified wormholes (uiWH) to the Drifter Hive systems and Triglavian invasions. With the increased number of wormholes to Redoubt (J174618), Barbican (J110145), Vidette (J164710), Sentinel (J055520), and Conflux (J200727), I took the chance and did a preliminary statistical survey into the target regions of the Hive system wormholes. My goal was an anwer to very preliminary questions: Where do the wormholes primarily lead to? Do the target systems’ regions differ significantly from a random distribution across known space? The data base consists of 335 scanned signatures from all five Drifter Hive systems within six standard days.

First of all, every Hive system now has a recurring static to C1 to C6 wormholes (Z647, D382, O477, Y683, N062, R474). Secondly, there is no suspicious distribution of Drifter Hive exits across different regions when controling for security level (see first graph at the bottom). Likewise, regions dominated by a certain political faction are not disproportionally targeted. Thirdly, so far there is no indication, that the five Drifter Hive systems share their target regions in any specific pattern, e.g. there is no indication, that Conflux does focus on the Domain region etc. (see second graph below). However, fourthly, when comparing the distribution of Drifter Hive wormhole exits by regions to the distribution of all solar systems by region, a slight difference becomes visible. The last graph below indicates that the drifter wormholes (bright color) might not completely follow the random distribution of the existing solar systems by region (dark color). You can see which regions had been disproportionally targeted by the Hive systems. A statistical test reveals that both distributions are rather independent, but its significant is weak. There are not sufficient observations for a strong empirical decision.

In our present situation between Drifters and the Triglavian Collective I believe that it is worth to invest a bit more time into the nature of Drifter Hive system exits. Therefor I would like to work on a stronger empirical basis with your help. I need two teams of capsuleers, working independently or in small teams on a flexible time schedule for about a week:

If you want to participate, please sign up here or send me an eveMail. I will organize the process, if the research group is large enough to share the workload. And please forward this request to pilots young and experienced alike. 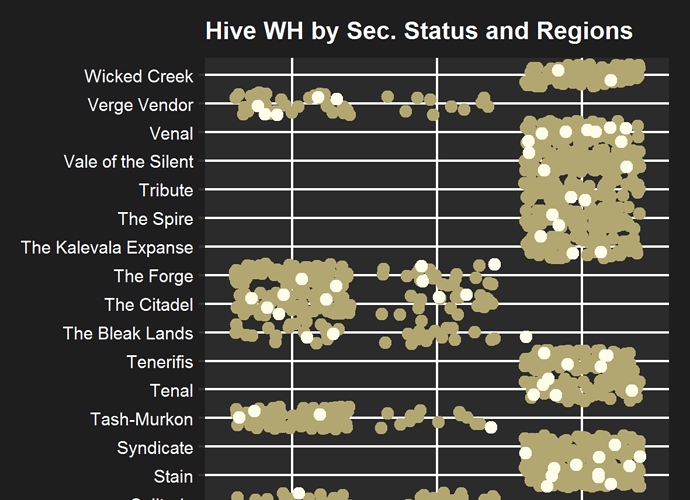 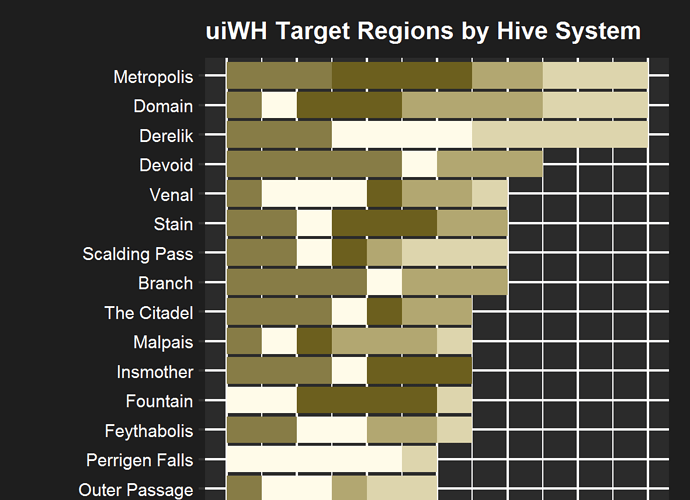 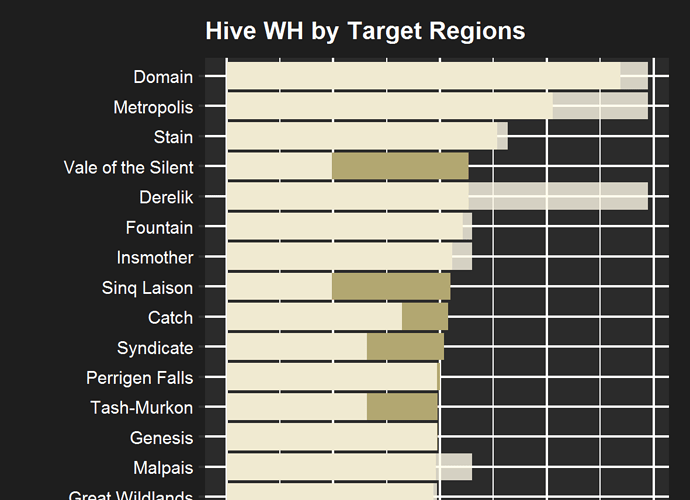 Good day,
The North Khanid Trade has begun to look into these little known pockets of space and would like to assist in anyway possible.

From our understanding there is over 80 wormholes per hive system, requiring a strong effort. While we mainly focus on trade, exploration has become a new and hopefully beneficial endeavour.

Thank you for your support. I will get in touch with you over the next days for the details.

Last time I checked, the number of wormholes in Hive systems at any given time was between 63 and 69. Some ridiculous high peaks have been reported in the past, but I never documented more than that.

Interesting data. I wish you the best of luck with the project, and looking forward to seeing more.

Signal Cartel members have made some of these same observations and have talked about a research effort. I have shared your message with my corp and encouraged them to participate in your effort. Many hands make work light, as they say. I will be watching with interest to see what your research yields.

I am one of the above mentioned Signal Cartel members and would be very interested in taking part in this research. I’m fascinated by the Triglavians and Drifters have been gathering any and all information I come across. The opportunity to build on this is very appealing.

Thank you for your interest and support. I will wait another day for more possible supporters. Expect more details tomorrow.

I’m currently sitting in Redoubt so I’d be happy to help.

Mynxee says your work is important and that you need assistance.

My name is Void Raven. I recently graduated as a capsuleer after which I joined Signal Cartel to focus on exploration. The opportunity to assist in gaining a better understanding of the current situation as it relates to the Drifters and Triglavians is most compelling. Accordingly, I would like to contribute to your endeavor in whatever manner you deem most appropriate.

Furthermore, I have up to now been hesitant to enter Drifter Hive systems, despite an undeniable curiosity about them. Having only recently graduated, I am still, dare I say it, timid in my approach to things unknown to me. It is thus that I also view this opportunity as serendipitous, in that it provides me with the impetus to summon the courage to enter a Drifter Hive system and thereby broaden my horizons.

Your assistance is very appreciated, thank you.

Also, welcome to the world of exploration, pilot Raven. I will take that into account and give some more details on safety procedures later. Generally, the work of Team W-Space is probably safer than that of Team K-Space, I believe. Anyway, I think this is an excellent opportunity for you.

Thank you for your mail earlier. I’ll be active with this as of tomorrow. I live in a a HS sector close to NS and will happily take part in both team K and W as the need arises.

This was a successful first day with two Hives probed and the Triglavian routes scouted. Though we had more than hundred signatures pinned down quickly (with substantial aid from our partner from EVE Scout), there is still room for more pilots to get involved.

I will be out there as soon as I return from my sabbatical.

Scouting continued today with pilots on rotating shifts. We found that the Triglavian gate camps in invaded systems were a bit tougher than the days before, more vigilant and amazingly fast tracking, even targeting our nimble vessels. But luckily, we had no losses.

After many hours in the hive systems we get the impression that some groups use them quiet regularly for shortcut traveling. The Hive Structures themselves were basically left alone. Also, we could find no further signs of Triglavian presence in the Hive systems. The single ship wreck a few days ago turned out to be a re-engineered model flown by a capsuleer. So, until today, no signs of Triglavian forces within the Hive systems.

I am unable to set aside time to assist with this project. Instead I have contracted some Sisters Core Probe Launchers with Probes to you Ms. Haritimado to make sure that the volunteers have the best equipment available.

I hope that my little contribution can be a help for the project.

Thank you, Dr. Devara. They will be put to good use, I promise. I received the donation just before closing of day 3. The shift is now rolling again and I am just about to pass some of your equipment on to one of our scouts.

The data collection phase is coming to an end. The team of volunteer explorers has probed more than 1000 unidentified wormhole exits from within all of the five Drifter Hive systems. This incredible task has been pulled off by a small wing of pilots, namely Aldar Roanaok, Aneko Cavin-Guang, Mike Cartwright, Void Raven, and IKAME pilots. The collaboration with EVE Scout was crucial and we are looking forward to share the data in the future.

Should you wish to follow the example of Mynxee and show your appreciation for the tireless dedication of the above mentioned pilots, feel free to contract any donnation of scanning and exploration equipment to me. I will be happy to distribute it to all involved.

As of now, the project will enter the phase of data analysis. We will keep the interested community informed about any results. The project is labeled JuRE from now on, acronym for the Joint unidentified Wormhole Research Effort.

A small note; I’d like to take a moment to thank those who’ve contributed to the data gathering effort. Work like this is often tedious, but important for developing theories on the operational capacity of forces like the Vigilant Tyrannos.

A token of esteem has been forwarded to involved pilots; use them well.