The consensus to date is that the Drifter cadavers are of Sleeper or Jovian stock. Given the extensive cybernetic enhancement, however, and that Drifters appear to be coming from locations in wormhole space in some way firewalled from the areas we’d encountered before, we are uncertain as to whether the Drifters are Sleeper infomorphs, artificial infomorphs, or something else beside.

Following some intelligence, we identified a Drifter fleet engagement in Nourvukaiken. An approximately 30-strong Drifter fleet was engaged by capsuleer broadcaster ‘BjornBee,’ Bjornson Thellere, and approximately fifty or sixty freelance Capsuleers in destroyers.

Camera drone footage indicates that these Drifters were, actually, more intact than prior fleets, but completely lacked any facility for shield generation. Review of footage will continue to verify whether any Doomsdays were fired. However, it does indicate Drifter IFF systems again failed after approximately a minute of heavy engagement.

Drifters were engaged in force in Isanamo. Novel trinary data vaults were recovered from the wreckage.

Processing is on-going by specialists while combat personnel route to the next Drifter influx.

To add to this, me, Unholy ghost & Stig Elendil have attempted to get a non-hostile response with them in various ways, from flying odd ships to carrying various interesting items with us, sometimes even jettisoning them for the Drifters to pick up.
Alas, no response came, beside their scanning, which they do on everyone.

The third group of the day in Evuldgenzo has been taken care of. If you hear of or see any other Drifter fleets, feel free to pass that information on to us.

Strange happenings are underway, though today’s strangeness is likely a mere harbinger of further things to come. Today’s encounters were the first in which Drifters have left new materials behind in their wreckage, and what’s to be found within them may prove to be as interesting as it is strange.

As always, the work is on-going, and there appears to be further data we’ve not yet collected. One of the initial segments of footage recovered from this vault is appendedin this archival.

I would like to note the tireless work of the pilots involved in this operation, whether it was in assisting in the transport of material, in the retrieval of assets from the field, or indeed fighting on the field.

It would appear, whatever else occurs, that we have honed our expertise with trinary symbology to a fine point. The implications are clear enough, and further efforts to attempt to initiate communication may follow.

If a communication can indeed be successfully transmitted using this knowledge, perhaps there is a chance - however remote - that a de-escalation in our current conflict with the Drifters can occur.

I believe it more likely that we will simply be able to learn more about their motives, however, and naught much else.

Stop the video at 46 seconds

What in divinity’s edge…Is that

Good catch Mr. Yaken… what IS that? Some sort of ship?

We honestly have no clue whatsoever - it’s quite an ominous presence, that’s for certain. Though that ball in the middle of it reminds me of another bit of footage given to us not-so-long ago…

Could they be related? 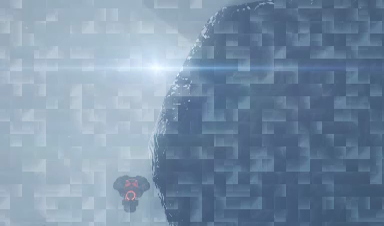 That, if anyone’s wondering, is at that timestamp. 'ello there buddy!

Any ideas yet on what those things are ? Or what their agenda is ?

These little video snippets do demonstrate one thing. Whoever is releasing them is filling them with artificial artifacting and degradation… and poorly at that.

Sounds ridiculous, but it’s almost as if someone’s trying to drip feed something dramatic in order to keep interests and attention at the ready without actually giving anything interesting out.

Yes, I am fairly certain they stuff their ships with artifacted, low-res surveillance footage, set them on fire and send hurtling at a rapid pace through Empire Space.

That’s just it. It’s demonstrably not low-res. It’s poorly turned low-res and artifacted, which makes the whole thing weird. I know of no process that can degrade footage that way “naturally”.

To give a summary of the communication attempts:

Capsuleers involved: Jandice Ymladris & Stig Elendil
We used a wide variety of objects in an attempt to get their attention, often jettisoning them in the hopes of a Drifter response. Science teams aboard our ships kept close track of any possible oddity.

The items were flown in one by one with no response form the Drifters, not even when we carried capsuleer corpses. Combination of the items did not provoke a response either.
The only thing that occurred was their ever vigilant scanning and even that was not out the ordinary, no special focus or negligence.

Considering Drifter activity in the past, ARC proceeded to remove them forcibly from known space.
You can read about the 3 Drifter encounters here:
Multiple Drifter fleets sighted on a single day!
Do note that the first fleet was destroyed by an unrelated capsuleer fleet & no attempts at communication nor research could be done.
The two subsequent sightings saw the communication attempts before the forced removal of the Drifters.

As noted above, salvaging the Drifter wrecks yielded a previous undiscovered artifact, the Corrupted Trinary Vault, containing the mysterious footage linked above.
To this day, we do not know what drives the Drifters to appear in damaged fleets in our space, nor who did this to them. But until we can communicate with the Drifters, we cannot take chances sadly, as they are simply too powerful to let them roam unopposed in such numbers.

But until we can communicate with the Drifters, we cannot take chances sadly, as they are simply too powerful to let them roam unopposed in such numbers.

They routinely get blown to bits by a smattering of suicide destroyers. How exactly does this qualify as ‘powerful’? And honestly, I still wonder just who’s caused the most loss of life so far, the suicidal destroyers or the Drifters?

The Drifters obviously.
Over two years ago, when the Drifters attacked without warning, they not only destroyed various SoE installations but also destroyed capital ships & titans form the 4 navies.
The loss of life from our side pales in comparison to that.

You might like taking chances with a force that doesn’t mind blowing up Titans to get to a SoE installation, but I’m not so inclined. The safety of my people is above the safety of these Drifters.
And because invariably proof will be asked:
A wrecked Erebus Titan after the initial Drifter assault on the Big 4 when Alpha clone technology has been revealed
The relevant World News article: Drifter attacks on research facilities across New Eden

You’ll have to forgive me if I don’t really see much similarity between strikes against military and RnD facilities, and these gate-scanning fleets. Time and time again, it’s demonstrated that they are largely harmless and destroyed by small groups of destroyers thrown at them. Doesn’t exactly seem like they’re very dangerous when that’s the case, does it?

The questions that never seems to get asked or investigated, “What the hell did the Empire and SoE do to piss them off? What did they do to cause this situation?” remains unanswered and without investigation, for some odd reason. It’s almost as if people are trying to purposely distract from that, in favor of unmitigated aggression.

Something was done at those facilities, and by the Empire, that caused these Drifters to perform high power surgical strikes against the facilities and even Jammies herself and since then they’ve pretty much been harmless. Why isn’t figuring that angle out a bit more focused upon? Facilities across the nations, involving the Navies, the SoE, etc etc. There must be paper trails and investigation opportunities for years there.

I mean, it doesn’t provide the shiny spectacle of throwing sacrificial crews at the Drifters who’re being harmless of course, but I wasn’t aware “flashy reporting” was the main objective here.

Huurrrgghhh I’m a minmatar who assume the capsules media player has all the codecs to 110% accurately play video clips encoded by who knows what equipment, at some unknown time in the past, stored in who knows what medium, from spirits knows where.

So negative you cancel out all the positivity in the universe.

Elders turn up, rescue all the Minmatar from the Empire and put a force wall round the Amarr to prevent them reclaiming anything ever again, and give every Minmatar a never ending drinking horn of orange juice, and you’d whine about how it wasn’t lemon-lime.