Can we define “meaningful”

So, I’ve posted a lot of stuff on here.

I want to propose a definition of the word “meaningful” as it pertains to our activities in the game.

I propose that for an activity to be meaningful, it has to be affect another person… positively or negatively in such a way as to have a lasting impact.

The reason I bring this up is that increasingly, the game is going towards meaningless activities because meaningless fights don’t hurt as much.

-pve provides a game component of progression which is admittedly important… but if fails to be truly meaningful.

-PvP in the consentual arena-style of faction warfare doesn’t do this… mostly it’s just an ante ship lost and a gf in local. It’s empty. It has no meaning because it cannot create an impact. Both parties have too much control over how much is won or lost for an impact to be delivered.

-I’m currently playing in a wh Indy Corp. We were recently impacted by a fleet of dedicated individuals who who chose to change our trajectory.

While it wasn’t comfortable or pleasing… it elevated the level of engagement of every member of the team. It changed what we were doing. It made us talk to our aggressors and each other.

It made us change skill programs, try new things, and re-think they way we were playing.

It was meaningful, and for many of our members, it will be a turning point in their story.

We have talked about nothing else since this fleet chose to interact with us. It isn’t appreciated, but it’s as engaging as it can be.

This is meaningful. We are now friends with this fleet.

We are growing as a Corp. We will be different next month than we were last month. Our trajectory has changed.

If this hadn’t happened… we would have continued our sleepy progression, barely talking to each other and deeply set in our comfort zones.

Dear CCP. My daily interactions in this game used to be meaningful when I was busy being a threat to highsec in a T1 frigate.

Can flipping, small team grudge driven warfare, and the myriad of activity they drove were packed with meaning.

It wasn’t all candy flavored… but meaning begets meaning. Bad interactions lead to good interactions, and relationships, and learning, and engagement on a level that just isn’t happening anymore.

Bring back the meaning.

Its something you never forget.

PS. Id name my child CCP Falcon if i could get away with it.

Falcon would be his middle name.

I saw a motivational poster that said “life begins at the edge of your comfort zone”.

I think this big conflict between the PvP and Pve crowds centers around the comfort zone.

PvE players want to stay in their comfort zones.

PvP players want to push themselves and other out of the comfort zones.

That’s where the stories. And excitement, and relationships, and interest, and fun really gets intense.

I propose you change the title to “Please bring back meaning into EVE” and request having it moved to F&I.

You’ll know it when you see it.

PvP players want to push themselves and other out of the comfort zones.

But PvP is a comfort zone for PvP players, so by definition of that “motivational poster” they have no life unless they explore other opportunities?

But I’ve really come to believe that “meaningful” interaction is something which needs to be differentiated.

CCP’s analysis led them to use the term “meaningful experience”, which isn’t necessarily the same as “meaningful interaction”.

So while I totally get where you are coming from, the idea of “meaningful” is too personal a thing to reduce to only affecting others.

It’s presumably effective marketing, but in terms of accurate information it’s speaking to a small real audience and a bunch of confused teenagers. Most people don’t need extreme stimulation to feel good.

If something is ‘meaningful’ or not is deeply subjective.

Last meaningful moment for me was when I did risk a T3C worth about 1b in PvP - for the simple reason that this was the most expensive ship I have flown intentionally into PvP to this day.
This moment is pretty much irrelevant for everyone else but me and the fleet I was flying within.

From my point of view an attempt for a general definition in the context of Eve seems not… meaningful.

We play in a sandbox. By playing one does accept this. One accepts that it is your personal “duty” to chase what the game makes enjoyalbe for you.
If one is not willing to do that, one should not complain about not having a “meaningful” experience.

To have fun in Eve just takes a bit more effort. The “meaningful” moments can be found everywhere in Eve. But they have to be looked for.
I play this game because this effort pays off more than in other games.

This fleet that engaged your wh-indy corp did bother to look.

But PvP is a comfort zone for PvP players, so by definition of that “motivational poster” they have no life unless they explore other opportunities?

Pve is repetitive. Once you’ve succeeded you can repeat your actions for the same results. (once a comfort zone is established, you stay there).

The exception is when new pve content that works a different way is released.

Anyways, to the original subject. I would define meaningful as ‘The Butterfly Effect’.

Events or actions that change or impact a players course or attitude.

Surely, an event that has no effect on a person is by definition meaningless.

Pve is repetitive. Once you’ve succeeded you can repeat your actions for the same results. (once a comfort zone is established, you stay there).

Then “comfort zone” is not right term to be used, “complacency” is.

Others who invest a lot of time (often years), money and thought into the game strive to find content that is meaningful.

Many people are completely missing the point and instead superimpose their individualistic perspectives on what is a rather easily answerable question, as he proved himself already.

He’s asking for a greater perspective.

Not how you define meaning for yourself, but what’s meaningful in existence itself, in context of the game.

I think of it as a balance between:

in context of the game 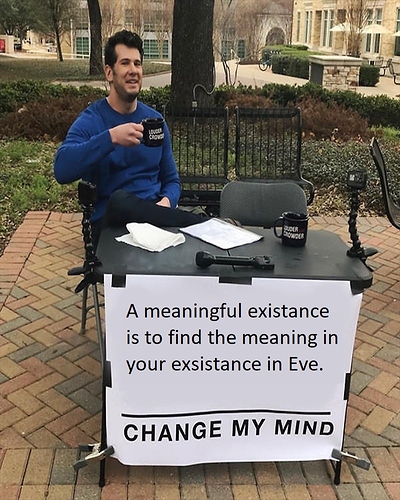 You did it TWICE! D:

Perhaps the word “inconsequential” would be better suited to doing those activities that nobody cares whether you do?

I’m not saying that you guys don’t enjoy shooing rocks or running level 4 missions. Or ratting.

I’m saying, somewhat generally, that nobody cares if you do them.

For the “multiplayer” aspect to have the depth Eve needs to survive, I think players need to care about the actions of players… and that comes from:

If we don’t have meaningful obstacles, we will not work together in meaningful manners to overcome them.

It’s an MMO. Let’s make people matter in it. Good, bad, or indifferent.

Fantastic adventure, definitely worthy of being celebrated with an appropriate in-game memento!

This, too, is meaningful.

In a shallow perspective, all it’s being is some random guy travelling through space, but when looking at the bigger picture, it’s meaningful for us as a whole.