Question on Claymore vs Nighthawk for PVE.

I get that neither of these are best suited to the task but I have other ships that are and just want something new in this category to putz around with.

It seems like the Claymore might be a better all around PVE boat due to the additional drone bay, which typically flying a Rattlesnake makes more sense to me.

Also, the Claymore is not locked into Kinetic missiles.

Any thoughts on this?

Of course, you can also remove all the guesswork, and just plug your fits and the target profiles into pyfa to see what would happen.

Note that this is against a frigate sized rat with a uniform resist profile. 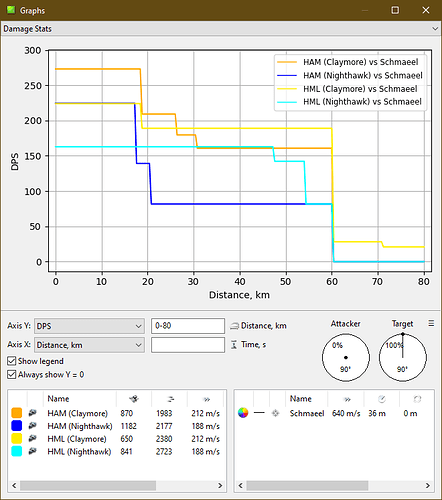 In fact, here’s a cruiser with a uniform resist profile 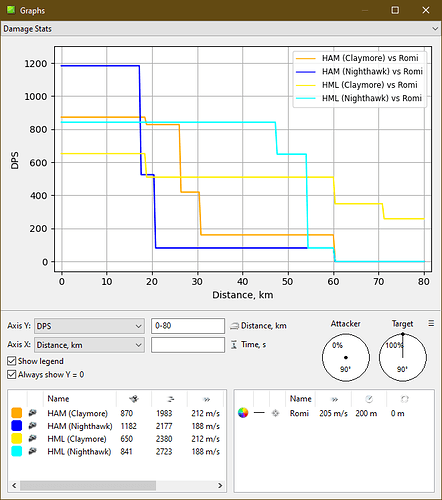 Anyway, both ships are good. But I think that overall, skirmish links are more useful than information. So, since you’re just messing around, you might consider training for the Claymore and skirmish command bursts, as you might get more mileage out of them in the long run. Don’t get me wrong, I don’t mean to sell information links short. It’s just that the skirmish ones are really powerful.

That is excellent info. Thank you very much. I am not using Pyfa right now as I just came back after being out for a long long time.

I kinda switch it up and split most of my PVP into both short and long range ships. Spending a lot of time in an Eos right now sniping, but it also has enough tank to brawl up close. Kinda what I want to do with this setup.

I am already trained into them both, so really just need to bump the command link skills I think. My other character is over 100 million skill points so I can do most anything really.

I am leaning more toward the Claymore so this really just helped confirm that some. I have not messed with the command links in a long time. In fact I did not know they actually worked for solo PVE. Only ever used them for fleets.

Thank you again. I will play about with the Claymore first and see how it does.

But I think that overall, skirmish links are more useful than information.

Next time you get jammed by Guristas Pirates, you may want to rethink that. An information linked Nighthawk would have said lol.

That does kinda suck to be sure. Why the Eos works so well, they jamb me, but not the drones.

I will probably just build both.

I thought I would come bac around on this after having built both and trying them out.

The Nighthawk is much like the old school Drake with even more tank thanks to the Command Burst. It also lays down very decent alpha damage while the flight of small drones pick off the small stuff.

The Claymore has a fantastic tank as well, but struggles in the DPS department. It is selectable but does not put the alpha down like the Nighthawk.

I like them both as they are different but have to say that the Nighthawk is fun to fly and does very well in heavy rooms.

Claymore upsides you mentioned yourself.

Neither of them however are great at PVE if you consider the price tag.
I would go as far and argue that even a Gila would do a better job at PVE than a Command Ship.