So its often mentioned about peoples collection which got me thinking about how to use this for content.

So if for example I want Aiko charred corpse but it must come with a nice killmail to, which then would dictate price. obviously some people don’t want npc on the km which would command a high price.

People could then collect people they think are famous or influential while others could offer a hunting service.

Want do you think to that. 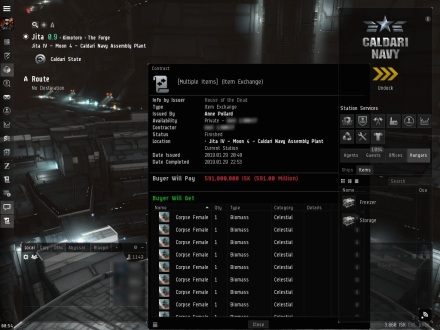 A short article about gathering and selling corpses. 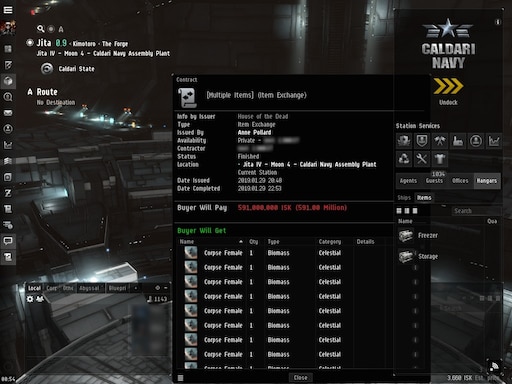 Based on my related experience I don’t think most people would care where the corpse comes from thus would not require a killmail as proof of anything, if they want to buy the corpse they do so as long as it is legit and not just an alt renamed to seem the same or a totally different one.

Not entirely sure about contracts but it is guaranteed you can see the names of the corpses if you open a direct trade window and put them there, at least the last time I sold corpses where the buyer wanted to check their names used this method and worked. The good thing is you can drag and drop corpses en masse so even if you have a container full (1,000) you can do it then the buyer can cherry pick the ones they want.

But it all depends on for what reason one buys them (see my related blog article) and never had anyone care about how the corpse was acquired even when they bought them as collector’s item.

I’m one of the few who has Erotica 1’s Frozen Corpse.

Corpses stay on space for a long time, it is helpful for gate camps, other than that it’s boring. CCP failed when they made corpses with no relation to kill reports.

The superior PVP game, Ultima Online, has a skill called Forensic Evaluation and you can find out about the kill when you find a corpse. On EVE we can investigate by clicking the wreck, then pulling the name of the owner, then spying on zkillboard or finding the body and looking up on zkillboard… and many times zkillboard has nothing to say about it.

So bodies on EVE are meh. If we had the Captain’s Quarter and if could build a throne of skulls than it would make sense hoarding corpses… or if you could swear allegiance to Blood Raiders and steal some free skill points from the corpse… etc.

A throne of skulls which you could click and see list of names of all those skulls then it would be amazing. But the people from that place where CCP is have no sense of humor apparently, they only sold us grind, clicking, boring tasks.

lol - Aiko is probably already setting up selling her corpse to the mark.

They way, we gankers think, if someone is trying to sell our corpses (because our corpse is rare to get - we are that good escaping) wewill mass suicide to generate tons of our corpses and sell them ourselves just to ruin such bussiness.

Do you or do you not currenty hold that meat bag?

lol - Aiko is probably already setting up selling her corpse to the mark.

I had watched they even align to warp away as soon as Concord show up so they can pod warp.

Do you or do you not currenty hold that meat bag?

I did have many chances to collect my own many times but I wouldn’t want to cheat as I was on other pilots at the time and it would not be fair so I ask did you cheat that kill mail or did you use your main?

Main, but it’s me and some of my men I believe from corp

I might go after that prize collection myself as soon as my permit arives in my evemail.

12 days I have it marked on my calendar

Want do you think to that.

You have a way with words

You have a way with words

It was used long ago when we frostpacker first met her in space and the start of our roleplay.

“I want your corpse bad” - such a romantic is Frostpacker.

//
How about we start with something a little more fresh such as asking you [Zaera Keena] is there a pilot in which you admire enough to want to obtain their frozen corpse?

Seeing that you were once Horde, I recall apologising for littering their space with my frozen corpses.