So drones are, obviously, unmanned vehicles that we can take with us into space and kill things with. But how do you envision them in-universe?

I’d like to imagine there’s a blend of both AI-controlled drones, and crew-controlled drones. The smaller ships probably rely on AI moreso than bigger ships, of which have more crew and resources to dedicate to drone control bays. Sure it doesn’t make sense that you skilling up makes your crew better, but neither does it make sense that skilling up makes your ship AI better. And it’s said that the more modules you have on your ship, the more crew you have as well to operate that equiptment. I don’t see why it would be any different with USVs.

Perhaps it could be that Gallente ships have inherent bonuses because they utilize more sophisticated AI, where as the other empires use flesh and blood crew to man their drones? Who knows, unless CCP come out with something then I guess the interpretation is up to the reader.

Personally I like the idea of my drones being manned but with an AI autopilot setting you can opt for. Bandwidth is explained by the drone needing telemetry and sensor data from the mother ship. Thats just my opinion though.

I think I like the combination of (weak) AI and human controller. Here’s what I wrote of a drone (on a ship, from crew perspective):

“When you’re on the Sam-El-Dee, and you know missiles are already flying outside and there’s incoming fire, and the damned thing gets stuck, and you are busy trying to find a way to hack it to unstuck itself, and the loader Chief’s breathing down your neck, you’ll end up pleading and cursing it like it was another human being, and when it’s all over and the damned thing is still there and you sit with it and are, like, so we survived but no thanks to you, buddy, it’s like… yea, machines grow on you, and you can develop a relationship like that with a tractor on a farm once you’ve worked with it a decade, maybe. But one battle like that and Sammy has stolen a part of your spirit forever.”

“SAMLD. Semi-automated missile loader drone. Each has a human keeper, because let me tell you, that ‘semi’ is some rose-tinted optimism if I ever saw it.”

[Episode 4] Image credit: fleet: Jack Gallofree & ((face, found here, unsure of the original)) Episode 4. Battlestations! The high-security war ends by diplomatic means without shots fired, less than ten minutes to undock to the first battle. Ships of the wing and our Rookies with them deploy to Triglavian-infested Pochven. Kathy has ideas on how to make ship armor hardeners more efficient, but finds that on a combat ship, few people have the inclination to listen to the new gal. Maryam, K…

But how do you envision them in-universe?

They are AI controlled, sort of.

By sort of I mean except in the case of player ships where it is a mix of AI and pilot controlled this is why skills improve their effectiveness.

of which have more crew and resources to dedicate to drone control bays. Sure it doesn’t make sense that you skilling up makes your crew better

neither does it make sense that skilling up makes your ship AI better.

Again because it doesn’t.

Iirc your ships don’t even have a crew until the cruise level. And battleships only have at most a couple dozen. These are almost entirely for maintenance. You control all the functions of your ship in the same way you control your body. Skill books literally download information into your brain to teach you how to better optimize that body down to the individual nano bots.

Just then, Kevin saw a flash of engines, as the two Valkyrie pilots zoomed out to meet the enemy. Those two were the daredevils of the crew, assigned to first launch, with 8 other pilots waiting in their ships should those two take too much fire or the Captain ordered a different set of attack craft into space for his own reasons. the drone pilots would always argue about the best type of payload. Valkyrie pilots always arguing for good old-fashioned high explosive, and sure of their position based on the fact there were 4 of them and only 2 pilots assigned to deliver each of 3 other payloads. Within moments, the enemy fleet fell to ruin, the drone pilots whooping in glee as they delivered their goods to the enemy.

Not lore accurate I dont think but this is how I imagine drones working, taken from a story I posted recently. I might rework it later to be more in line with canon.

Iirc your ships don’t even have a crew until the cruise level. And battleships only have at most a couple dozen. These are almost entirely for maintenance. You control all the functions of your ship in the same way you control your body. 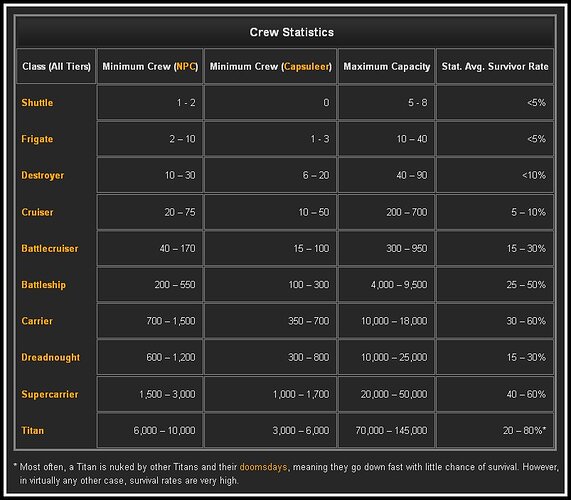 All ships have crew, with the exception of shuttles, corvettes and certain frigates.
Also in most ships the crew absolutely performs other functions, like reloading weaponry and controlling drones, as mentioned here:

All These Lives are Fit to Ruin - Real Life Science Fiction

This was a hospital. That much was certain.Parien, lying in a soft bed, had been slipping in and out of consciousness. Sometimes there had been people in here, talking in low tones and checking on the machines that stood next to his bed. Everything...

As for the OP’s question, drones are refered to explicitly as semi-autonomous in billboards advertizing guristas hulls, not to mention that more advanced models use ‘Elite Drone AI’ in their manufacture, which is recovered from some of the larger, more intelligent rogue drones. Skills as a system do have a slight gamey element to them that requires some suspension of disbelief since they do not strictly affect a pilot’s immediate ability to fly things but also to better care for and upgrades to their equipment. Warhead Upgrades, for instance, just means that you are using slightly better payloads on your missiles. To that end, I do not see why we can’t see drones as behaving exactly as they do in-game, controlled by AI of variable sophistication with measures taken to ensure they don’t go rogue that respond to commands issued by their ship. The ship can designate targets and issue simple commands (attack this, return to me, guard this fleetmate etc) and the onboard AI handles all the specifics like locking targets, burning towards them and opening fire when in range.

Can you link? I’ve not heard of that one…

http://wiki.eve-inspiracy.com/index.php?title=Spectrum_Breach
Most likely it no longer works.
But there is a Russian version: