🔥 Hot EUTZ PVP in low-sec and sometimes null, the ★★ Sons of Luminaire ★★

A laid-back community of experienced and active PVP players in the EU Timezone,

An appreciation for your real life and a fairly relaxed approach to the game,

The ease of staging in one of the hottest PVP systems in EVE, which is close to Jita and has access to a variety of content within 5 or so jumps including nullsec and Caldari Militia staging.

The Sons of Luminaire are a small-gang PVP corporation which has, does, and will always focus on solo, small-gang, and small-fleet PVP. We are an established corp and have been for three years, with leadership active daily and with a solid roster of recent joiners and veteran members. Most of our experience comes from faction warfare, where we are consistently one of the top killing corps.

We have around 30-40 active members and operate in the European Timezone, with a mix of nationalities, predominantly British

. Whilst a fairly casual corp we have reasonably high standards of the people we recruit and expect anybody who joins to be an active, motivated PVPer willing to try new things and take fights against the odds.

Our goal is to fight the Caldari Militia and whatever they bring. We might fly kitchen sink; it might be an organised nano gang; or it might be heavy armour brawling in an open plex. If things are quiet in low-sec, we’ll form a small fleet and go piss off somebody in null instead - usually by bubble camping a staging, shooting a jump bridge, or stealing some ESS money and then dying to 10 Vargurs.

We are a true PVP corp with no ambition other than to remain the top killing corp in the Gallente Militia. We have no desire to hold sov, no desire to develop a capital wing, and really can’t be assed with wormholes except as a means of getting to places where there’s things to kill. That’s all, really. Join us if you want good PVP and minimal hassle. An Omega account and that you join with the character you play the most,

A mic, and the ability to use Teamspeak and speak up when it’s needed,

That you can log in for at least a few hours a couple times per week to come PVP with us.

*we are willing to recruit folks who don’t quite meet our normal requirements - maybe you’re one of those poor fools who flies logi too much. But we’re also willing to give newer players a chance. Come have a chat with us!

You can try our recruitment quiz if you have time to waste.

Or, just join our Discord.

Finally, here’s what some people had to say about us:

“[…] am enjoying the corp and get on with the guys. It’s a solid atmosphere and with lots of breathing room in the right way. Me and my bro are loving the way the guys regularly take fights that are stacked against us.”
El Geo, Sons of Luminaire (joined 04/11/22)

“you will die while ■■■■sucking each other and drown sperm, die”
Christy Rotten-Mack, Domain Domestic Research Holding

“Sons of bitches will be better name of corp”
Ujuiii, United Feudal Confederation

First night of the corp being properly back and the killboard already looks like this. Look how far I had to scroll out! And that’s only the first page! Wow! These guys must be amazing!

Exciting fun to be had. Right here. Sons of Luminaire

Have you ever thought: ‘I wish I had more PVP in my life’? We have lots of it. Join today.

It’s nearly the weekend. What a great time to join a PVP corporation. Fleets! Kills! Excitement!

Still recruiting! Come lose your ship because I’ve forgotten how to run a fleet. 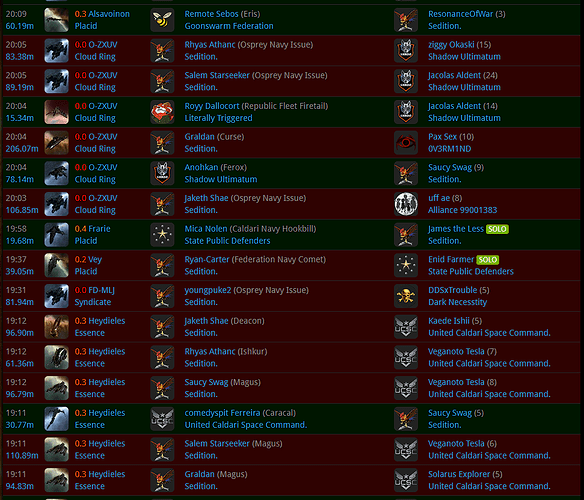 Battle involved 90 pilots who lost a total of 11.3b isk

If our killboard is slow, it’s only because the enemy kept running away.

Friday night was a blast. Come join us.

Battle involved 25 pilots who lost a total of 3.52b isk