★★ Sons of Luminaire: for all small-gang PVPers and pirate filth in the European Timezone ★★

Visit our website for more details, pretty pictures, hot PVP video action, and all the links you could ever need.

The opportunity to fly a range of ships, from AFs to nano to armour HACs and more,

A real appreciation for the fact you have a real life: a casual approach to the game,

The ease of staging out of Jita 90% of the time –easy, no jump freighters required…

The other 10% will be spent deploying to content regions and killing everybody there.

The Sons of Luminaire has a storied (if short) history.

Born in mid-2019 with 10 members who were fed up with FEDUP, their Alliance at the time, the corp quickly grew to 40 active, decent members and became at the time one of the top killing EU timezone, small-gang PVP, sub-cap only corps in any low-sec region.

We fought and always beat the Caldari Militia, often whilst outnumbered and winning with solid small-scale doctrines; we also supported other Gallente Militia operations region, laying the foundations for the warzone to be later retaken.

In late 2019 our staging citadel was laid siege to by FEDUP, its former Alliance, in response to…

… well, acts of piracy committed by the corporation in FEDUP’s sovereign space. We won.

Having left faction warfare for now, we focus on broader small-gang PVP in low-sec and particularly in null, using the tools we want and going anywhere in the galaxy that suits us, and to do two things: kill as much as possible, and take as much loot home with us as we can reasonably carry.

We try to punch above our weight, aiming to take fights when outnumbered or outshipped. The idea is to win. We often do, we don’t always, but so long as we’re having fun that’s the important thing.

PVP-focussed pilots who are familiar with game mechanics and PVP;

Over 500 kills to prove it; and at least 30 million skillpoints focussed on PVP skills;

You will need your own ISK, and a can-do attitude towards the game;

A mic and an ability to speak on comms when needed, usually Discord or TS;

People who want to get involved socially, whether that be on Discord, or on voice comms;

People who are active enough to log in at least once a week to fly with us.

You can complete our stupid recruitment quiz to get an idea of whether you’d be a good fit, if you like. It takes 60 seconds.

Still interested? You can join our Discord and ping @Recruiter in public chat to get our attention.

And finally, here’s what people who don’t know what they’re talking about had to say about us:

“… as someone who’s fought em many times solo or in a small gang, I can promise you, dear potential applicant, that these fellas bring a good fight.”
anon, Reddit

“idk saucy I have yet to be in one of your fleets where the entire fleet was not paid for by loot scooped from the shattered husks of your enemies”
Alquimista Blanco, Aideron Robotics

“recent recruit myself, though I can say already that it was a very positive move joining these guys.”
Corp Thieph, Sons of Luminaire

The best corp I’ve found so far. Small corp but the core is of very experienced pilots who always can show you a trick or two. Relaxed attitude in corp, but try-hard mode in fleets, always trying to push well above their weight.

These guys are the reason that my return to the game in 2019 after 8+ years away became permenant. Good people and good pilots!

Great Group of individuals. Experienced, relaxed players with who you’re assured to have fun with. Had I the ability I 'd move accross the Atlantic to be in these guy’s timezone.

Looking for more people to come blow things up with us. Didn’t get too many kills tonight but I’m sure there’s more to come…

Want to come be a scrub with us? Join today.

Another roam tonight, 3 x Harb, 1 x BNI, 1 x solo logi Loki, 1 (2, for a bit) x Omen Navy Issue. BRAVE yet again weren’t brave, and then we almost got dropped by Dead Terrorist Loki fleet but instead killed all their dictors after burning off the gate.

Went to PH space via Thera, found a good fight, loads of guys warped in - we killed a couple of battleships incl Mach and Praxis, lost our Starac because I’m terrible at logi, and called it a night. Really good fun in the final fight with Horde. 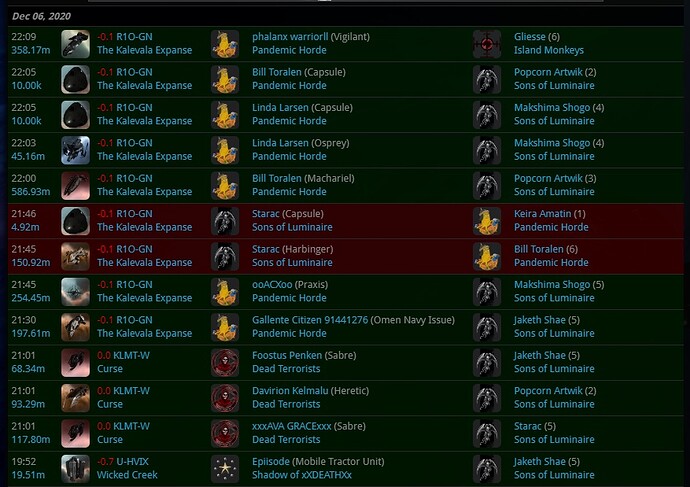 Gave EVE Uni a couple of rounds of brawling in lowsec this evening. Pretty good fun. Join up! https://zkillboard.com/corporation/98596389/

Have an in game channel??

Sons Public is our in game channel. We don’t use it too much but there should be a couple people around in prime time EU. 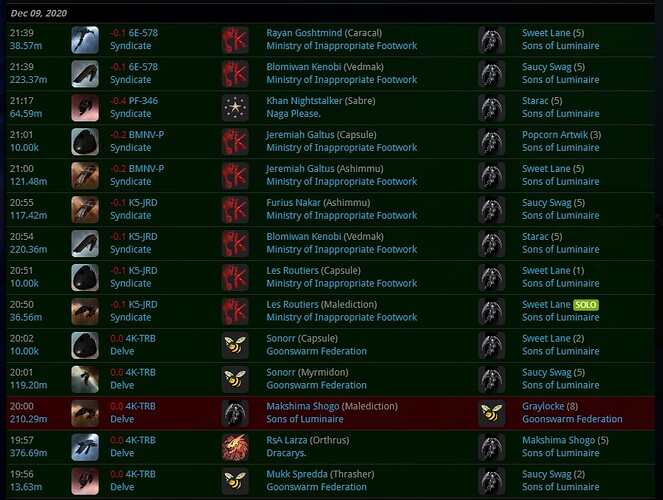 Quiet night tonight, likely to be some action tomorrow. Don’t miss it.


Ambushed some people outside a site. Sacrificed the Vaga to hold tackle on the Abaddon. It was worth it.

Killed a few other things too.

Still recruiting! Low-sec roamed again tonight. Every time we end up in lowsec it usually seems to involve brawling EVE Uni. We try to give them a fair fight…

Battle involved 33 pilots who lost a total of 150m isk

Tried to catch some incursion ratters, gave up after waiting ages, then went out in kitchen sink frigates and dessies (Kiki, Magus, AFs) with ice storm filaments with a couple of old friends. Killed some odds and ends.

Some really good fights tonight. Took home about 2.5 billion in loot. Lost our logi Loki to a Thrasher gang. Taken on several new members who are keen as mustard to blow ■■■■ up.

The reason i enjoy and play eve again, Fantastic bunch of guys, Relaxed, helpful, Good fun and laughs, Regular PVP small gang roams which are brilliant. A very chilled out Corp and one of the best i have been in since playing eve since 2007. Highly Recommended.

Tonight, we ended up in Black Rise three times thanks to filaments…

Only had one real fight, https://br.evetools.org/br/5fdfca7a4cec62001a940662, which didn’t really end too well for us - they had some ■■■■ hot interceptor pilots and also three logi, which the BR doesn’t include. Oracle applied quite well but Talos just had too short range to really do much. 2 x Oracle would probably have wiped out their fleet.

Taking a small break over Christmas, but that doesn’t mean we’re not recruiting! Next roam is Sunday.