How do you do the analysis.. thingies? Rupture vs. Bellicose

I’m a low SP nullsec Scythe pilot working on training for Minmatar Cruiser V and I don’t want to waste time on other ship skills right now. I don’t need to reach a theoretically maximized ISK-earning level, but not watching rats rep almost as fast as I chip through their shields would be nice.

Right now I’m using a Bellicose with four meta Heavy Assault Missiles with standard Nova HAMs and single web, but I’m wondering if a Rupture with Fusion loaded autocannons would work out better; I doubt painters are of much use on battleships, and I’ve been moving toward belt chaining.

People have sneered at me for experimenting with Minmatar ships for this, but Angel AI is brutal on drones, to put it mildly, so my experiments with the droneboats popular wisdom often suggests have ended disastrously so far. If an also shield tanked Rupture can crack the repping speed of Angels battleship tank substantially better than the Bellicose I experimented with, I can spend time working on a fit and ammo supplies for that, but I’ve heard… wildly varying opinions about comparative DPS. I know it takes a couple of iterations to get a fit just so; I’m not sure if the numbers on paper are worth my time to experiment for.

Also, I just… want to know how to do these analyses, I’m sure I have the tools available to me if I had a clue how to learn to use them.

Tips? Pretty graphs? Thanks in advance!

Pyfa is a great tool as Geo Eclipse mentioned. It lets you experiment with various setups and see how modifying them will work.

One things your should consider when looking at DPS is - How good is your missile skills vs your projectile turret skills? And are your willing to cross-train? Missiles and turrets use different sets of “support skills” to improve their damage application, range etc. And: Are you going to get implants in the future? If yes, then are they going to be for gunnery or missiles?

I would also suggest you think about tanking. How good is your shield vs armor skills? The Rupture is geared more towards armor tanking, while the Bellicose is more towards shield tanking. Shield are often easier to setup against Angel ships because of the high explosive and kinetic base resistance. With armor there is a low explosive resistance hole you will have to keep in mind.

One more thing to keep in mind: Missiles have consistent damage. Turret damage varies - sometimes you get good shots, or wrecking shots with more damage.

You asked for a DPS graph

So I used an Angel Warlord battleship’s stats. It seemed like it was near the middle of their range of battleships. To compare apples with apples, for the graph I setup the ships as follows:
Rupture: 4 x 425mm Autocannon T2, Fusion Ammo, 1 x Gyrostab, 1 x Webifier
Bellicose: 4 x Heavy Assault Launcher T2, Nova Missiles, 1 x Ballistic Control, 1 x Webifier 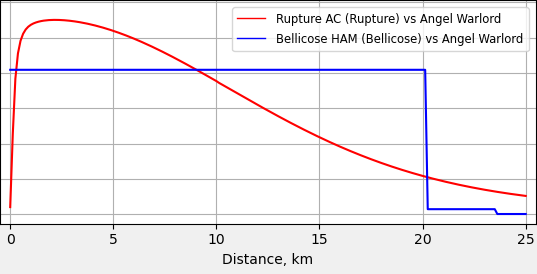 I won’t say one is necessarily better than the other. They each have their strengths and weaknesses compared to the other in certain situations. Only you can decide which one you like the best and enjoy using.

And good luck to you. I hope you enjoy Eve and have fun

Also: The Belli has 40m3 drone bandwidth, while the Rupture has 30. So either the Belli can fly an one more T2 medium drone, or carry a couple additional “spare” T2 light drones for small, fast targets.

In all they are pretty even, the one that is better flown and takes advantages of the other’s weakness will win.

It is a little off topic, but I learn from your conversation that is might be possible to successfully engage battleships with a cruiser. Is this the case just in belt ratting, or could that be done also in missions (e.g. lvl4)?
I thought a battlecruiser at least was needed, but a battleship would be appropriate.

Any reply is appreciated.

A few level 4 missions can be done in a Tech 1 cruiser. I have done a few that way myself. However there are 2 big problems that make a T1 cruiser a bad choice for some of the level 4 missions:

Of course it becomes easier if you use a Tech 2 or Tech 3 cruisers. Some people do L4 missions in a Cerberus, Ishtar or Tengu, for example. Because they enjoy flying those ships

Really the smallest PRACTICAL ships for Level 4 missions are the T3 cruisers or T2 BCs. Command ships can handle level 4s pretty well, as can a properly fit T3 cruiser as mentioned above. Both combine superior tanks and good damage output. A T1, or even a T2 cruiser, just can’t handle the damage received and still do enough damage to not sit there all day.

A T1 BC can generally do them, but are touchy too; simply tank and firepower combined aren’t high enough to be effective. Do-able, maybe. Effective, no.