How to unbork FW megathread

The point, Blackdog, is that FW could be better. It could bring back things that were proven to work, like system lock-outs. Some balance changes that encourage investment rather than the opposite. Medals were great, were you ever around to see how much they inspired the militia to push on for one? I’m asking for changes that make things more difficult, not easier. So I contest the accuracy of being defined as a whiner. Things have indeed changed. The river has been stopped near the source and the valleys run dry. Dig in the ground for your optimism, but don’t pretend the player fallout has not been woefully high, morale depressingly low.

A lot of great suggestions in here.
While I’m new to FW, I had a few ideas.

same amount of LP to each pilot in the plex, whether there’s 1 pilot or 10 pilots.

This wouldn’t work well. It would only encourage farmers to fill as many alts as possible within each and every plex. You would see more stabs, and they will be found in droves. ::shutters:: But, yes, the shared system does encourage you to fly with fewer pilots, and that’s a good thing. We want this. Small gang is wonderful content. ps. Keep an eye on local and take fights you have a good chance at winning and finishing before back-up arrives. Always assume this is not a fair fight and play evasively until you can determine what the odds are. Or fly dangerously. However you do it, aim to fly well. A loss mail can be as much a good reminder as it can be a bad one.

I have to shoot first.

Yes. You should.
Luckily, there are clone soldier tags found inside lowsec too. Make some money or just bump it back down to prevent it from going too low. If for nothing than to even things out around stations and gates. Either way, say goodbye to positive sec status.

In all honesty, I’ve never considered looking at my overview settings. I just did after I read your post, and I un****ed my overview. Thank you!

This wouldn’t work well. It would only encourage farmers to fill as many alts as possible within each and every plex. You would see more stabs, and they will be found in droves. ::shutters::

I see your point. I considered it when I said that they would have to lower the amount of LP given out for plexing, but I guess the problem is finding that sweet spot where it’s not worth it for farmers while it is worth it for everyone else… that sweet spot probably doesn’t exist now that you mention it.

Hello all! As some of you might be aware I’ve been talking with various members of the FW community recently to try and get a handle on the problems faced by it, and looking at what ‘little things’ i.e. Non fundamental changes we may be able to...

If any of you guys have this set to Watching, I have linked this FW Rountable announcement. Give that thread some bumps. Cheers. Roundtable breakdown. Some things I couldn’t hear. Forgive some bias. Add anything you feel I missed. 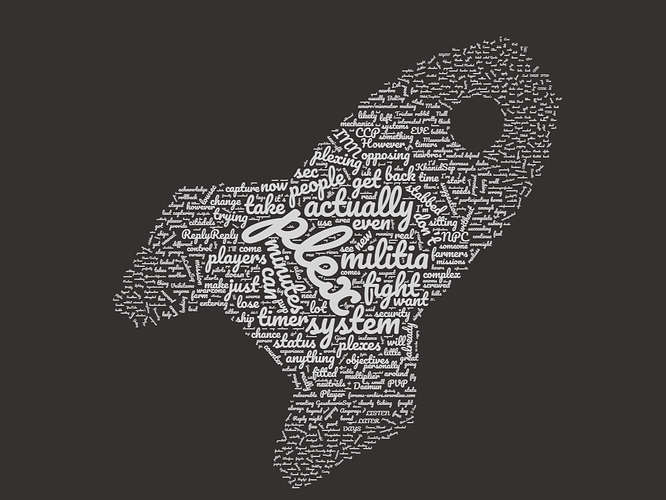 Had 2 minutes spare, have a wordcloud of this thread in the shape of a rocket. Yes I forgot to remove the reply button on each post from the word count. I am bad and feel bad.

Although we go about citadels, missions, farmers and a variety of other subjects. It seems that getting the plex mechanic right would be a good place to start.

The system needs a good long term incentives / targets to trigger loyalty to faction and give a real arc to players in this area of operations.

Replace the current raking system with a combat and VP acquired mechanism. The Militia elite should have killed hundreds of enemies. Add a rank full reset on immediate leaving militia or at least on joining of another militia.

Make the most high value and sort after items in the new LP store have a purchase requirement that includes a high Militia (new version) rank.

Create conflict drivers. More locations in space to attack and fight. Why not have hard points on the i-hubs that are directly linked to the system rank and have them as valid targets of aggression. LP pays for them. DPS removes them (not afk plexxing).

Make system rank bonus’s mean significant value through bonus’s and discounts so they’re worth fighting for.

Citadels need to be linked into the FW mechanism.

Still not seen the suspect status for entering a FW complex… Why was this not done?

Flatten the bonus’s on the tier system. Seriously they’re over the top. Do not penalise Tier 1 Militia. It makes no sense to discourage capsuleers from joining or fighting for the losing side.

I don’t think stabs should be restricted in the militia. This would just make it impossible for newbies and alphas to farm LP. This isn’t a personal killmail factory for solo nerds…

If they don’t want to fight, chase them off, be content with that.

Truth has been spoken. This is how I learned it when I started - not once did I go farm plexes with warp stabs. And if a scrub like me can do it, so can the rest.

I don’t agree, there’s too much stuff to learn about aligning, warp core stabs are a necessary training tool in the beginning. And it doesn’t make any sense to restrict them. I like Eve to be realistic, the only way you could get rid of warp core stabs is if both sides of the conflict agreed, through Concord that they would not be used.

There are ways to lock down a stabbed ship, if I scrub like me can do it, then, well…

By bringing in instalock Navy Mauluses with faction scrams, perhaps? And even that won’t stop a 5x stabbed Punisher for one example, I believe. Warp core stabs are a crutch, and a bad habit that just poisons your learning for later, forcing you to take off the training wheels after you’ve gotten used to them and it will see you die painfully when you aren’t being careful like you would be if in the first place you didn’t just assume that even if someone jumped you, you could just leisurely warp away with no intention of ever fighting anything whatsoever.

I make billions from FW, so it seems fine to me.

I think a simple fix to limit L.P. purchases in the L.P. store that discourages farmers of plexes would reduce the number of them in the FW area.

Farmers thrive on no conflict plexing. Make fighting a requirement to earn certain ranks to access higher tier L.P. store items. For example, limit no rank militia to buy only faction ammo with their L.P. or low grade hardwiring. So even if they farm 100k L.P., they can only buy ammo with it and have no access to buy ships.

The more isk value in kills they accumulate over a certain period, the higher ranks they unlock over time which gives them more access to the L.P. store. Make the rank activity/time based to make the access not permanent. Means players can’t exploit the mechanic by sacrificing a few insured battleship to unlock their ranks. This will make the constant PVPers have full access and maybe give it to mission runners as well. Since these two are the real FW content.

This access still allow PVPers to still earn L.P. that they can spend if they get no fights in a plex. New militia members still need to get some kills in to be able to spend their L.P. they earn in plexes. And farmers who just do defensive plexing can earn as much L.P. as they like but don’t get to spend it on big ticket items other than the common faction ammo or hardwirings.

Because guess what, if you don’t have all of your fitting skills and AWU V and whatnot, putting a credible fit on a T1 frigate is impossible. Much less what they are losing to T1 guns.