An auction contract that I’ve bid on stays as “requires attention” even though I am not the seller and I did not win the contract. Why is it in my contracts as requires attention and giving me notifications every time I log on? I have no option to delete or interact with the contract. Status is “unclaimed by seller”. Please get this trash out of our contracts windows.

Suggestion: Triglavian ship tree looks different than other trees
Keywords: ui, ship tree
Note: make the spacing between the trigravian ships look the same like all the others, now they are to far from eachother 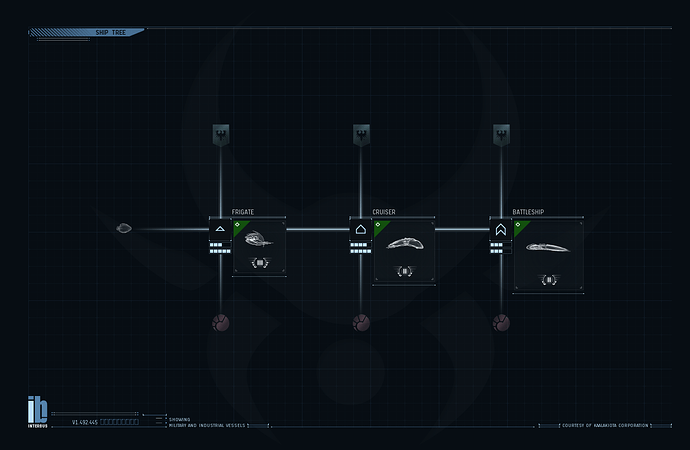 IMO I think CCP needs to get us the new JBs and then take the time to fix the code even if it takes years. Get this games code sorted out and upgrade the servers. The BEST way to sell this game to new players and old players is to have the big fights with 4K plus people and not have the game crash. It’s no fun for old players and new to constantly have to log in over and over. It also does not look well to people thinking of maybe playing EVE when they watch a Twitch stream and nothing is moving and the streamers cant even stay in system and not crash. CCP needs to change the oil in this engine called EVE Online not just keep adding a little when it gets low. It has been 15 years PLEASE change the oil! Old players will love having a game that they don’t have have to take days off work for big fights and new players will like a game that does not have them practice logging in. Would also be nice not to have to do a lot of tricks just to not crash. POTATO mode never again!

Suggestion: Multicontracting
Keyword: ship in contract
Notes: I mean when you have to contract hundreds of ship of same type to alliance, it is a pain… Like in multifit, mark 30 ships and greate an item exchange contract for each ship.

Suggestion: Inventory filter isk/m3
Keywords: inventory, filters, sorting, ui
Note: List and Detail view on inventory screens allow you to sort by the stack Est Price, or by stack volume. Adding an isk/m3 column would allow items/stacks to be sorted for shipping/looting priority.

When you test a no-lisensed skin in fit dialog, if you are doked, the skin remains in your ship until you undock

This give you time to see the skin in game for a while.

I don’t know if it is this ESI thing or something else but when I try to use third party apps like PYFA and evemon my Internet Security package flags up warnings so I am not going to risk instlaling those apps.

I have the fittings sorted with the in game fitting but the skill planning could so with some love. It would be nice to be able to list skils by attribute in game so we can plan our training around our attribute remap properly. at the moment there is no option to show skills by primary and secondary attribute… any chance of that being added?

Suggestion: Once one of the members of your corp has scanned down a Site, be able to share it with other corp mates. As scanning tons of sites each day in a system is a big bore.

This would be useful in bulletins, structure bios or MOTDs to let others know how long a structure is expected to remain online. One could determine this date using manual math or trying to snag it through ESI, but it would be handy to be able to see it in the browser.

Alternatively a date could be listed in the browser with a duration as a tooltip, since the duration is much less static. This is not what I would prefer (I like seeing durations by default), but is included in the suggestion because it makes some logical sense.

In the Corp window there are pulldowns for corp offices and owned stations. Now that conquerable stations and outposts have been phased out the latter pulldown has become redundant. Could that pulldown be changed to show all structures owned by the corp?

I think it is time to Increase the Insurance payouts and premium costs for insurance packages across the board to be more inline with the player driven economy and Ship Cost Valuation.

For example it could be alarm lights, holo messages with warnings or repeating voice messages. There can be different visuals for armor and hull reinforcements. Simple holo sign would be enough for pilots who casually login in 3rd party structures.

Small change, allow the search function in stations/citadels to filter corporations/alliances so if I type in “[-CCP-]” it shows all CCP corp members in station.

Are lacking drone bay energy field/curtain animation on them and as far as little things/Qol goes is easy fix…add them on hulls.

So in the ammunition attributes window, it lists the “base damage” of the ammo at the bottom. This is at best pointless and at worst seriously confuses people as to the damage that the ammo is going to do. These values are calculated by taking the four different damage types (em, thermal, kinetic, explosive) and applying them to a T1 resist profile. What it doesn’t mean is that a certain ammo type will do more damage to armor or shields regardless of resistances, which is what a lot of people seem to believe.

This seems like it’s probably a holdover from early on in the game’s life (like 2004), and in the modern game it not only doesn’t contribute anything positive but actually makes what is already a complex game for some people even more confusing. Please remove this once and for all.

Not possible. You have to completely log out to switch or do anything with another toon…