Market Bots - The market is saturated and something needs to be done asap- Read!

This one was a little more conservatively scripted, takes longer, but still exploitable.


[Album] Imgur: The magic of the Internet 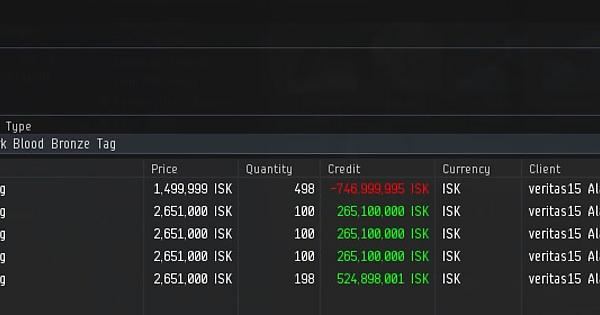 Very nice detective work people! Let’s hope CCP sort their ■■■■ out and do something instead of claiming they are “monitoring the situation”. I get watching for a bit to see if you can root out the more in-depth problems and catch more of them, but it’s getting ridiculous they are sitting on their ass and not intervening.

Even a response on this thread would be progress…

For info - the ticket I submitted with 51 names on it on the 1st of Nov, is still open, no communication other than right at the start when they gave me a copy and paste… this has been forwarded to the security team… next time please use report bot feature.

It is here my frustration sits, many of these names I submitted months ago and they are still operating. I’ve set them to negative standings and when I log in I just see the same names in Jita 24/7… they are brazen with their botting. If they were playing it smart then I could understand the delay / reluctance to act, but when they are as brazen as they are then it frustrates me why its all taking so long.

On top of the original 51, 37 of which had multiple sus RMT contracts against their histories so they should have been easy bans, I’ve now found another two dozen bots without even looking for them, plus others have sent me names which they in turn have identified, bringing the number that I now are operating in Jita to over 80. I used to turn over 5 bill plus a day of items, haven’t bothered now for months as the majority of items that I go to I now see them and think pfffff

I understand that CCP may be looking for a long term solution (I sincerely hope they are), but during the interim they can still hit them short term and hurt them financially and make their lives difficult, by banning those that are obviously operating - especially those that are reported to them by their customer base

and for example … that character that Sir Smashalot milked, not only have you got evidence from their market actions, but his contract history shows they exchanged a scientist for 4 bill with another toon… and when you look at that toons history they in turn exchanged with another toon 10 skill injectors for 1,000 isk - and once again they are in NPC corps, made six months ago so theirs another two sus names to add to the list

This is exactly what I mean. Customer support do NOT do anything with the tickets other than the standard response. security
@ccpgames.com is just an email address that is dumb - they listen but never speak.

I imagine it all just goes into a the recycle bin.

I would have thought with the amounts of isk involved here, and for certain RMT and money laundering going on (virtual or otherwise) - they would give a damn.

A forum response would be good CCP!

Security has responded to my emails a few times but I don’t expect it, all a response does is make you feel better.

Here’s security’s forum post: Eve Bots - are they a bad thing, is CCP complicit in their use?

But that was prior to the layoffs and plans may have changed since.

I used to hang a few buy orders in outlying regions, collect a few items per week and call it good. An absolute waste of time to any active Jita trader. But in the last year, especially since the rise of Alpha, it does seem like there is a new batch of players with nothing else to do, or market bots, willing to update market orders … as often as I am, chasing after next to nothing.

CCP might be planning a long term plan to prevent those bots from operating again in the future, I just hope at least they would give us a sentence or two regarding this matter… All I received was a vague answer…

From technical perspective, I understand that it is really difficult to implement any kind of mechanisms to ban those bots automatically, especially if they are using OCR or any other kind of image processing software… So this is actually a problem that has been existing for ages in other games as well

At least, I just hope that those known bots with suspicious contract history could be manually banned rightaway, it’s not hard to identify those bots at all through their behaviors in-game… The patterns are already clearly described in this topic.

I used to trade 10 bill a day on average, now I’m trading 0 as all the items I try on the bots are operating on them and its useless

Its now been over a month that I sent a list of 60 odd known bots to them, 37 of which had clear RMT contract histories, so those ones at least should have been no brainers, and all of them are still brazenly operating in Jita local 24/7.

I’m also aware of another 20 odd that other players have also reported, and they too are still operating

If and when CCP actually does something, if its successful, Jita local will drop off peak from 1200 to half that size, and the markets will be hit as on some items, particular T2 ships, the bots buy orders are the only ones up as everyone else has given up.

Why they don’t at least hit some of them short time whilst they sort a long term fix is beyond me - if they are amassing names of those that have bought isk on the black market, letting this go on so long without enforcement could be viewed as entrapment and it potentially will hit the player base as a lot of players could end up with negative wallets and leave. If they are leaving it for some big publicity stunt, then don’t they understand the harm this are doing to the game and their creditability right now and to be honest, if they tomorrow say look, we banned 300 bot accounts today, aren’t we good, I will reply that it was 9 months ago I first flagged this up to them and my games been crap since.

9 months of the bots increasing their hold on the markets as well as elsewhere in the game… mining, faction warfare etc

9 months of players increasingly buying from them on the black market as there’s no enforcement !!!

Your complicity has resulted in a new generation of Eve players who think its ok to buy isk off the black market. Do you actually understand the long term implications of this !!

Your turning valued customers into bitter vets and losing them here !

Ironically, when I first flagged this up all those months ago I actually thought CCP would be grateful. How very wrong I was.

DO SOMETHING AS YOUR CREDABILITY IS IN TATTERS !!!

CCP won’t do anything because you haven’t spent a single $ on the game since you are a no-life trader… only if you have spent hundreds of real $$ on the game, then CCP will pay attention to your concerns

Just an impression, no facts … in some of the stuff I’m selling, the buy order side has collapsed in the last days and all those 3d orders vanished. Maybe something happened against bots or it’s pure coincidence, but personally I’m not really happy about.

I had the same thing happen with two items I regulary trade. Those 2 day chunks of orders went bye bye and hasnt appeared to be replaced with any others, could just be coincidence also i guess.

Happy as larry as the orders never filled lately.

I see 32 known bots logged in currently in Jita - This number seems a bit lower than normal (normally see around 40 ish this time of day 12.37) but I don’t think this is due to CCP. Perhaps they have shifted their orders on your stock elsewhere as I still seem them on a lot of goods what I used to trade. Perhaps they are concentrating on other games as I’m sure due to the numbers / hardware and complexity involved they probably run multiple RMT operations and Eve is just one income stream

I’ll let you know if and when the bots disappear

Out of interest, are these market bots ones that undercut/overbid by 10.01 isk?

FYI to those that trade or farm Caldari LP or +4 implants. Courier bots are back in force. I am speechless how no fucks botting is right now in EVE. If you are in for a laugh check out Itamo IV - Moon 1 - Perkone Factory. Constant stream of haulers.

If you bump them off the station, after three minutes they log of and log back in. They do not respond to convo, trade, or duel requests. Active nearly all the time I have been able to observe them.

Out of interest, are these market bots ones that undercut/overbid by 10.01 isk?

Its whatever the operator sets them to. As a rule is plain old .0.01, but it can be anything. Likewise, the cycle at which they update is again set by the operator.

Here’s some examples which I’ve picked from across a spread of items, but their are hundreds more I know of. Look for multiple <3 day buy orders clumped together, (they use <3 days to stop long term manipulation attempts, but u can sometimes milk them as others have done in this thread) Where u see this pattern also scan the sells, because if they are buying, they are also selling - often you will see the first 5 sell orders all following each other by 0.01

If your in doubt put a buy or sell up and if its a quiet item see how quickly they react. Likewise you can sell / buy to them and they will be as I described as above, chances are they already known to myself (my own list is 80+ and I’ve stopped trying to identify them)

If CCP ever does anything about this, and they haven’t done anything lately even when they are reported by players, then watch Jita local drop by half… at least

I used to trade 10 bill a day on average, now I’m trading 0 as all the items I try on the bots are operating on them and its useless

If after all that trading you still cannot plex your accounts, maybe you just are not very good at it.

If after all that trading you still cannot plex your accounts, maybe you just are not very good at it.

What on earth has that got to do with anything troll, I’m 50 years of age and I’ve retired, money isn’t an issue and never has been. Quality of game is the issue, if you bothered to read all the posts then you would have seen this. If I decided to plex my accounts I would still be here raging about the bots