Do you have a list of definitions for the data fields in these reports? For example, the first line in economy_indicies_details.csv is 11/1/2003 - Ammo with a price_change field, a total_value, and price_change_weighted.

It may seem that the definitions are obvious, but they are not. When you are using the field price_change_weighted, is that value the value of the weighting for that particular iteration, or is it something else?

I am very interested to see how you are calculating some of these values because it’s not entirely clear.

Between Rattati’s idiocy and CCP price hiking and lack of content…Job Well Done bois! you are doing GrrrEAT!

Don’t forget this is summer on the most of the mudball that is Old Earth.

Many a people prefer to take their time away from landlines. Let’s see this graph in January.

Adding to that, consider expiring subscriptions of people who is unable to pay for technical reasons.
This, too, is adding to the dwindling numbers in statistics.

Hey Gozer,
I think this could be a useful addition to the MER data dump, a description of the files in the data dump. Will add this to the MER todo list!

But for the ones that you asked about, here is a short description of those:

entry_sink_value and entry_faucet_value: Are just the actual values, no rounding/flooring/ceiling. In the simplest terms, this is calculated by aggregating transactions between players and NPCs. Transactions from players to NPC is a sink, NPC to players is a faucet.

Its very strange to see no mining or destruction in poch I would of thought the bigger groups in their would have at least done some.

But it looks like poch is the place to be for condensed fight’s hmm looks exciting.

Also outter passage is out trading Jita wtf lol thats awesome, or is that from fire sales and burning everywhere? xD

things are getting out of hand again .We need more blue loot to help the the player base. printing isk in nul sec is still out of hand.remove asp the oversheer effects from dead escalations remove the npc t1 loot drop to make mining a thing again .all isk from a ratter should go to the ess .we need more scarcity!!!

Thanks for the data definitions. However, I was hoping to get some insight into the data collection methodologies and the formulas you are using to come up with these results.

For example, is the data sampled at a rate of (for example) 1-minute and stored? It’s important to know these things because they affect the analysis of the data. Right now, the intervals are fairly well defined, but I assume (and this is bad) that the value published is an average of data, but I don’t know the sample resolution or the intervals used to create the average.

I would actually like to see the raw data at its smallest sample intervals so I can run a proper economic analysis of the data. I prefer to start with the raw data and then build models from there. How the data is structured significantly influences what you can do with it, and I don’t have a very good understanding of the data structures.

I assume (again, bad) that you’re pulling this data from a SQL database, hence the .csv file and field names at the top of each report (references to “dungeon” were interesting).

Unfortunately the data right now can’t give full insight into the market. I might do some covariance calculations and assess whether I can build ratios, but there’s little more that can be done.

But thank you for providing those definitions. I would like to get closer to the data if that is at all possible.

Don’t forget this is summer on the most of the mudball that is Old Earth.

While you are technically right, human population isn’t distributed evenly.

Yea I’m freezing my ass off reading your comment and loling too. Coldest winter in 10 years wonder if the polls flipped.

I love all the memes around scarcity and BRM nerfs being necessary… Here is a comparison between November 2019 and July 2022: 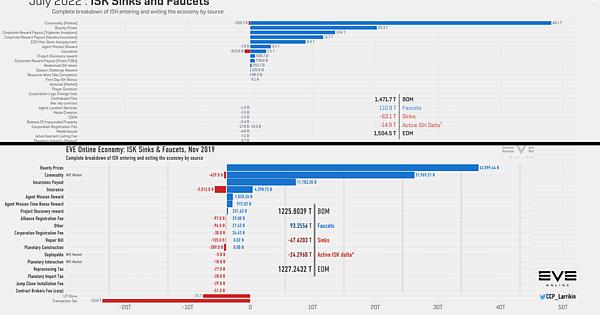 Faucets significantly higher in 2022, commodity faucets over 200% higher than ratting bounties in 2022.

Why was it necessary to destroy null again? The narrative seemed to be to reduce ratting income to balance the economy yet the economy is considerably worse off now with far greater faucets than in 2019 - which was the last time null sec felt rewarding. A large proportion of those faucets are going to areas occupied by fewer players (low / wormholes) alienating the majority.

A|bion Online has the greatest rewards in the Black Zone, the t8 zones (equivalent to null -1.0 systems) have huge rewards… Eve has an inverted model, abyssals, incursions and burners are some of the most rewarding playstyles in the game and all can be done from the safety of high. The devs have a fundamental misunderstanding of how to incentivise playstyles and long term aspirations.

Why was it necessary to destroy null again? The narrative seemed to be to reduce ratting income to balance the economy yet the economy is considerably worse off now with far greater faucets than in 2019 - which was the last time null sec felt rewarding. A large proportion of those faucets are going to areas occupied by fewer players (low / wormholes) alienating the majority.

That is with fewer players as well, so instead of a null player pulling in 60mil per afk ishtar in null they now pull 500m in the same time in a maruader taking a skinny dip in a wh from their null home. They have to thou as sov null is just terrible atm.

It’s higher now becuse of maruader buff, where before they could only do c4’s now they can do c5’s maybe even c6’s with abyssal faction gear.

They pay off their 1b best ship in game in 2 hours in a c5. Well I guess you have to include setup time unless they just going in blind something I would probably do at those rates lol…

The rate itself is actually fine for its difficulty, but the marauder in general is just over buffed currently. If It needed abyssal faction gear to tank (or faction + implants) while keeping its dps then yea seems fine but t2 fit come now.

But then again another nerf now will sink the players even more, it would need to come with a buff to sov null in general.

Worm holers can still do their sites, they have cap’s and rattle snakes and e-war setups and stuff they don’t need maruaders to Ez mode it.

null sec is free printing isk .ccp realized that and is focusing to the healthy player base of the game .We need more blue loot to help the players.Nul sec need a lot more balancing and we are getting there .Tier Overseer’s Personal Effects need to go it is free isk.Loot drops from escalations in nul sec need to be lowered .Mining is suffering due to npc t1 item drops ,people will melt them and get minerals .That need to go.I lost a 5 bill curse the other day and i had to rat for 3 hours in my wh to make that isk back, that is insane time for me.Null sec should be nerfed asp.

Your trolling is lol xD I feel kind a bad for people in sov null, they almost have to bot to even survive there anymore.

As everything is based around bot isk generation and balanced accordingly.

If they are not multi boxing 4 account’s they are not even making the same as the rest of us in other space on 1 char.

Unless ofc they are mining in hulks on a moon it seems to be the only decent isk in sov null.

we where promised industry changes for t2 ships where are they?t2 ships should cost more.about the mining thing loot drops from npc is hurting the miners .we need more scarcity null bears have isk.

I make more in poch with 1 ishtar than my rorq and 5 hulks all maxed out. Null is dead