Today I had received plex then wanted to move that plex from my vault to the hanger as one would do if a contract was about to be opened ext.

There was a delay in first moving the plex from the vault with a message ie; 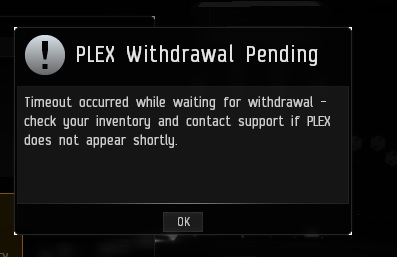 /
Then when moving that same plex back to the vault it sort of vanished for a short period of time.
(I do not know if it is a system overload currently other than normally this is instant.

I then checked a few minutes later and the plex was back into the vault.

So just giving heads up of the above thanks o7