Shut me down pretty quick! lol

@Aiko_Danuja
Would someone be so kind as to link me Aiko’s blog post about kill data showing that HS ganking took a huge dip since the mining changes. My google fu is failing me, and I’d prefer not to have to manually scroll through her blog to find it. 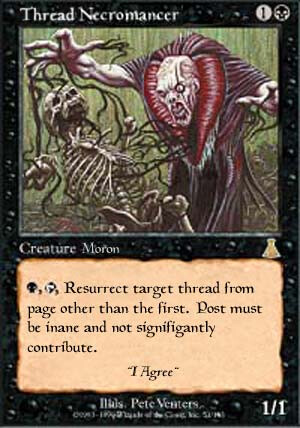 I think the basic thesis is, “Oversupply encourages declining prices, with less isk/hr for miners.” I encourage anyone who opposes ganking to think critically about this. If gankers are unable to kill targets, then AFK botters are the only ones who benefit.

Danger and risk benefit those who engage in active gameplay, I am well aware (as the #1 miner killer in the game) that there are miners who actively play the game and take proper precautions. Any nerf to ganking is to the disadvantage of the active miners, who are no longer rewarded for their effort and skill.

Another strategy is to be as slippery as possible

This one I understand to be my favourite.

Oh, by the way, for anyone monitoring this thread, I am currently working on a new video about The Great PvP Debate, Ganking, and my concerns that CCP is going to place additional restrictions on always-on PvP in Eve online. 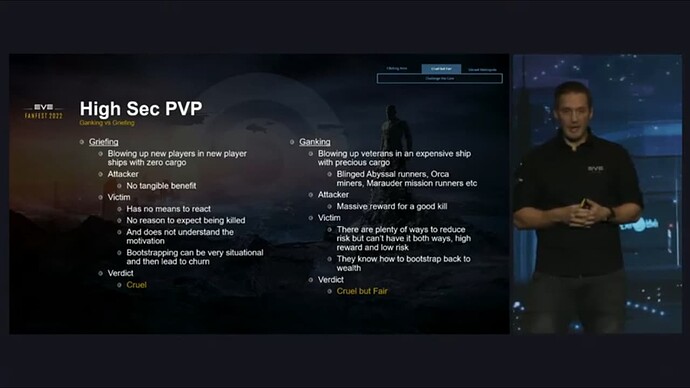 Case in point, the slide of ominous portent somehow managed to conclude that any instance of newbro killing that didn’t profit the attacker is proof of griefing. However, there are extremely rare circumstances when this might possibly perhaps not be true. 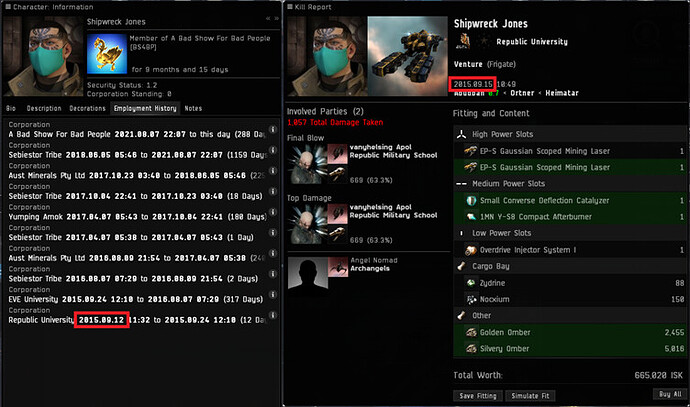 I also brook issue with other stuff on the slide. For example, I fully expected to be killed the first time I was ganked because… and stick with me here… I started playing Eve Online specifically because I had heard that it was a brutal, always-on PvP game with a harsh death mechanic. And, I don’t appear to be alone in this, Mike Azariah mentioned at this very fanfast how paranoid newbros are. So, I somehow doubt that there are tons of newbros getting blindsided by PvP here.

I also fully understood why I was killed -he wanted to take my stuff.

I have to admit though, it was extremely difficult for me to bootstrap back into another venture. I ruined keyboards with my blood, sweat, and tears as I spent weeks grinding for that ship. I was devestated when I lost it, and had no clue how I would every be able to afford another one… no wait, I remember now, I GOT TWO OF THEM FOR FREE FROM THE CAREER AGENT REWARDS! So, I already had a spare. Moreover, they were selling for below build cost out of Rens (I remember because the Venture BPO was one of the first BPO’s I bought, and I was surprised to find that I was better off selling my raw ore).

But, you don’t have to take my word for why I don’t think that newbro griefing is a problem in Eve Online. Because CCP agrees with me… er, at least they used to. 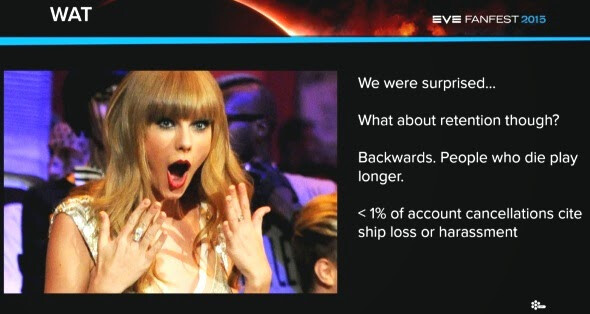 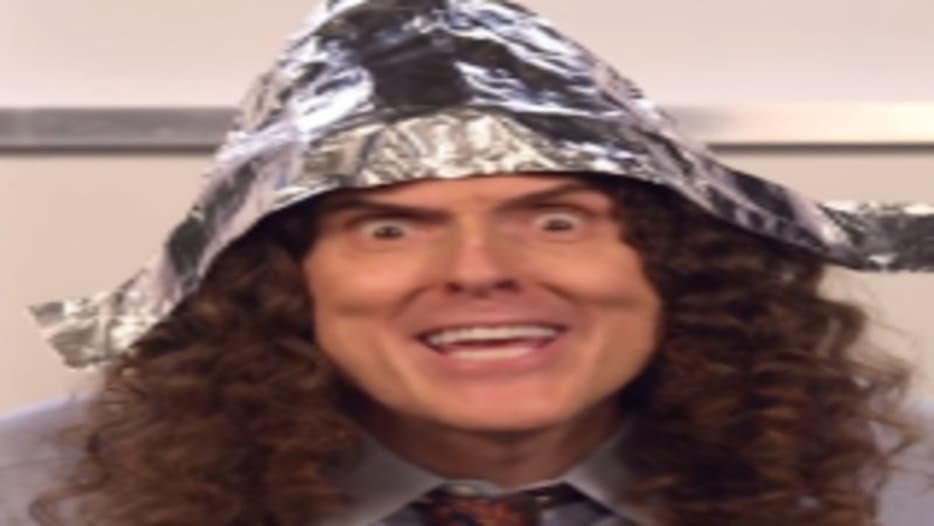 So, what’s going on with their Fanfest 2022 slide? What’s up with the bad analysis, and why are they suddenly singing a different tune about newbro griefing. Well, I have several possible explanations.

I don’t know what’s going on with slide, but I feel my spidey senses tingling. Sigh. I hope I’m just being paranoid because I’m used to playing with a bunch of manipulative assholes (a.k.a. my kind of scum

I am currently working on a new video about The Great PvP Debate, Ganking, and my concerns that CCP is going to place additional restrictions on always-on PvP in Eve online.

Put it somewhere I can’t miss it, SJ; my ageing brain…

See how this reads, I am not even a veteran yet which means I won’t be able to be ganked.
(This means I no longer have to pay for my Highsec Permit @Aiko_Danuja )

Saved this pic as Ganking-Changes-Coming

As you can see next to my name here I am an official veteran but I don’t undock with this character anyway so I can spare the ISK without worries.

The thing with the comment about, “CCP wants to take Eve in a more casual direction” wouldn’t this also change the contracts as we currenlty know them as?

Do you refer to the EULA?

Edit: Because if yes then yeah probably it would mean that will be updated as well. And no you can’t do anything about it they change the EULA all the time without your consent.

Edit2: Well technically by using the software after the EULA change you consent to it else you should no longer use the software.

Meaning the ingame contract system and if not a EULA violation, you keep ISK or Items.

Wouldn’t softening down hardcore effect of New players into New Eden as it currently is would then change the ability to contract scam?

Well, they were talking specifically about ganking, but I have heard reports of GM’s reversing scams. Don’t know how often it happens, if it’s on the rise, or if CCP will change official policy, but I did see a screenshot from a correspondence with a GM. So, it’s happened at least once.

Depends how hard CCP wants to appeal to the lowest common denominator and how much they want people to be sheltered from their own mistakes. So yeah it is possible they will rework the contract system too and who knows what else.

But no idea what they plan and not even watched fanfest stuff, the little I’ve read about it is from the forums and it all just sounded underwhelming. Though curious what they change in regards to the FW, at least I might participate more in that aspect of the game in the future depending on the changes.

A lot of ganking starts with the simple contract.

eg; Contract is created to look as trustworthy as possible to haul items from point A to B between systems with not much jump traffic and the trap is sprung as the contract has a expiry,

The only way they’ll be able to further reduce high-sec PvP is if they accompany the reduction with NPC buy orders for resources and items (and then jack up the market taxes even further to compensate for that). Anyone looking at the kill board can fundamentally understand that new players aren’t the ones being killed in large numbers. If there’s any spillover from protecting truly new players toward established/veteran players, it will have to be addressed economically unless CCP is content with an economic “end-of-life” scenario for EVE, and they’ve shown that they aren’t through the addition of concepts like Trig and diamond rats.

Further nerfs will necessitate changing the gameplay loop to consist of selling resources and loot to an NPC-driven market, and then losing most of those proceeds by adjusting a few market orders two or three times. If people prefer that to occasionally losing a ship, well, there’s not much I can do about that. My opinion on the matter is outnumbered by the mainstream gaming population to such a degree that it can be effectively considered to be within the margin of error.

Once you leave starter system, you not newbro

Blowing up someone with no tangible benefits.

That’s going to be hard to prove. Especially if it’s a bro like me that role plays as an environmental activest, speaking for the asteroids that are being torn apart by wonton miners who put profits over long term environmental impact.

Blowing up ships with no cargo.

So now we have to scan a ship to ensure that there is at least one scrap metal in it before blowing it up?
Does this also include the clearly abandoned MTU’s that litter the space lanes?

And then there’s the worst possible explanation -that slide was propaganda.

I fear it was propaganda , it also reassured gankers their play style was safe and reassured new player they are safe ish too, if they come under cruel attack (not that it happens that much )

Propaganda can be a good thing , it reinforces ideas and standards even if they are not under any real threat.

Because it sure warms the heart which is quite the benefit to one’s mood.