I was looking at the Resource War banners and thought that they would make an excellent GUI upgrade for target calling and broadcasts.

Not as large as the site banners, the markers would make it easier to distinguish the ship from the ship identifying marker when calling targets or broadcasting a point of interest.

When the Capsuleer scrolls over the banner with their mouse pointer the roids marked would glow the same color of the banner. 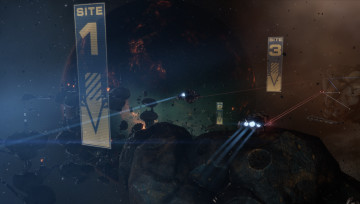 As pirate forces encroach on the borders of New Eden’s sovereign nations, capsuleers are being contracted to assist with resource gathering operations in high security space. Forming part of resource gathering...