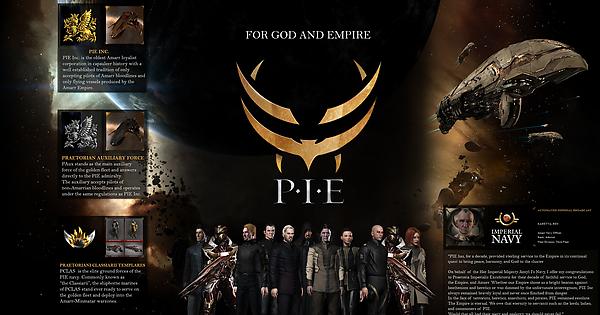 Praetoria Imperialis Excubitoris (PIE), one of the oldest and most respected corporations in New Eden, is recruiting. For many years we have existed, not only to uphold the Word of the Lord, but also to keep our ancient traditions alive and defend the Holy Amarr Empire against her enemies.

We gladly sacrifice ourselves in the name of Her Imperial Majesty The Empress and the Scriptures, both of which we follow fervently, and seek to once again unite the galaxy under our way of life.

PIE’s pilots, in particular our officers, have many years of experience in-pod and offer guidance & advice whenever it is needed. You will be flying with the best, and all the benefits that that entails are available to you. There is an incredible sense of camaraderie, honour and above all pride amongst the pilots of the corporation. We are a band of brothers and sisters that work together, fly together and sometimes die together, with a deep felt belief in our cause, our corporation and our empire.

PIE, Inc. is the oldest pod-pilot corporation loyal to the Amarr Empire, having been founded early in YC105 (May 2003). It is believed to be the third oldest surviving player corporation in EVE. It is notable for its policy of only admitting True Amarr, Ni-Kunni, and Khanid pilots into its ranks and for only flying ships based upon Amarr hulls.

Throughout its existence, PIE Inc. has been a fervent RP supporter of the Amarr Empire and has also engaged in multiple anti-pirate campaigns. PIE is currently focusing on the war with the Minmatar Republic.

PIE Inc. was also the founder of the CVA alliance and participated in the Operation Deliverance wars in Providence and low-security Domain. Its CEO at the time, Hardin, was also alliance executor. PIE Inc. eventually left CVA to return to Empire space and Imperial Dreams took charge of CVA.

Listed among its achievements are the return of an Apocalypse Imperial Issue to the Empire through a Minmatar blockade, escorting Brother Joshua on his journeys around the Kor-Azor region, being a founding member and former executor corporation of the Curatores Veritatis Alliance, and participating heavily in the conflict between the Amarr Empire and Minmatar Republic. PIE Inc. was also recognised by Yonis Ardishapur for its role in the capture of Kourmonen from Minmatar forces, and by Grand Admiral Kezti Sundara for its work in the Research Race of YC116.

PIE, Inc. is an Amarr-only Corp and will not accept applications from individuals not of Amarr, Ni-Kunni or Khanid origin.

Potential applicants have to understand and be in agreement with the PIE Inc. Contract of Employment . They also need to be in broad agreement with our mission statement and aims and objectives.

PIE is not a place to seek redemption. Pilots applying to the Praetoria should have clean criminal records as far as Amarrian law is concerned and have no record of working against the Amarr Empire in any capacity. If a pilot has a record that has been sullied in any way, their application will only be considered if they have clearly redeemed themselves through direct service to the Empire.

Pilots in PIE are in a permanent state of war with the Minmatar militia and often several other organizations. If you are not willing to risk your ship and life to defend the Empire you need not apply.

We expect all of our members to take part in the war either through industrial and financial support or active military duty.

We are dedicated roleplayers who participate in various EVE sponsored as well as player sponsored RP storylines, HOWEVER, we don’t expect everyone to be RP experts when they join PIE. There is much written about the Amarr Empire in EVE fiction and other posts and we like to see people make an effort to read these items (they’re all in one place for easy reference ) and try to fit their character into the mold of “loyalist” before they apply to PIE.

Potential recruits are expected to register on PIE’s forums http://www.piecorp.info/community/board/ and make an application through the Recruitment section. You can also join the “PIE Public” Channel in game to learn more and to speak to a recruiter.

We in PIE are in EVE to play a game. We don’t believe in “win at all cost” and we won’t play like that. We are however, loyal, dedicated, fun and believe in Amarr, the Empire and Faction Warfare. If you feel like you want to be part of the family and can answer YES! to these questions, then you may be just what we are looking for:

This is who we are and why we play the game. Friendship above all else in the greatest nation in the galaxy… 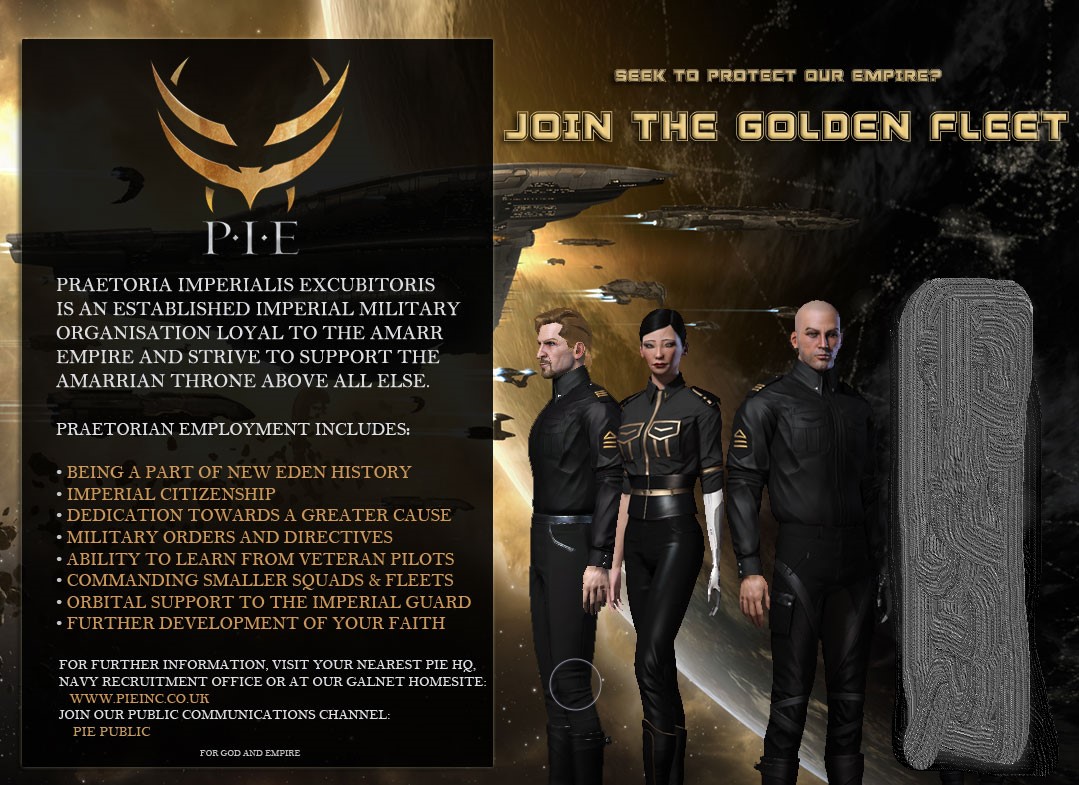 I support and/or condone this service.

Possibly the only remaining Amarr loyalist corp/alliance in all of Eve. Worth looking into if you’re into that sort of thing.

Of course, this also means there’s standards involved. This may not be everyone’s cup of tea.

PIE is still recruiting and looking for new pilots!

Come serve the mightiest Empire in all of New Eden!

I’ll enjoy a fine Amarr Spiced Wine over either, thank you!

As a former member of the PCLAS during the days of DUST, I just happened to stumble upon this thread via google search.

I was never the most vocal member of the corporation at large (the moniker “Humble Seeker” may ring a bell to those with a history in P.I.E), but did my best for my fellows and the Empire up until the end of operations. Alas, I could never really stick with EVE itself seriously enough to bother wasting a corporation’s time with taking me on.

So I just wanted to advocate for them – if it were not already obvious, you’ll not find a more loyal and dedicated bunch of Amarrians in all of EVE.

a friendly hello from the CVA!

Yo, what up! Keep the dream of Amarrian Provi alive! And if null has you down, you’re always welcome to come fly with us in FW space!

We are flying in Amarr FW
Neutrals are welcome,
No Hostiles (War Targets & Having -5 or -10 standings with PIE)
No Heretics (you know who you are)

Just wondering if your good selves are still recruiting? I’m a relatively new pilot and I want to do my bit for the good of the Empire.

Always recruiting. You are more than welcome to start the process!

I’m currently running Eve through a potato, so I’m not much use in game until I get that sorted. Until then I think I’ll head on over to the Public Channel.

And a free bump in return for you

We are flying in Amarr FW
Neutrals are welcome,
No Hostiles (War Targets & Having -5 or -10 standings with PIE)
No Heretics (you know who you are)