I’m seeing a drop in performance lately and was wondering if there is a reason for this and if we’re going to see an improvement or if this is already a consequence of the new Etags.

I perform a series of normal, unauthorized requests (mainly universe/ and market/ requests) as part of a test suite, which in the past used to execute like clockwork and didn’t take more than 800ms to execute. However, lately am I seeing a wide spread in performance all while the ESI server shows green lights.

Have no issues here. 6m+ requests in the stats below. 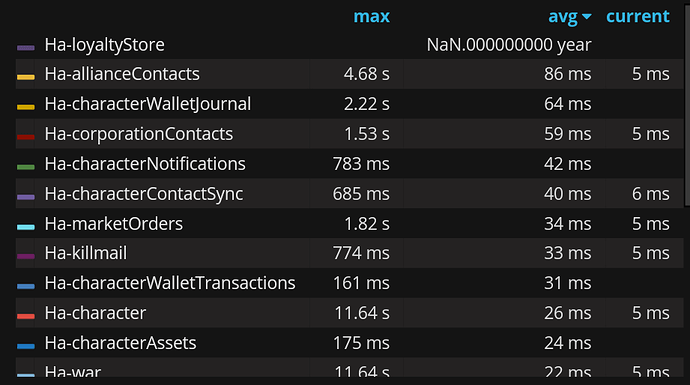 Sometimes I see responses such as this:

Occasionally it is the No reply within 10 seconds error response. But a lot of times does it simply stall for no apparent reason. There is almost no activity on my router. X-ESI-Error-Limit is also way up at 99 or 100. After a retry then does it pick up the resource and returns a JSON string as it should.

I’m a bit bummed out really. Cannot do much debugging and testing when response times shoot up from less than 1 second to as much as 3 minutes from what I’ve so far seen. This is going on for days now and I’m wondering if this is still happening in connection with the DoS attacks.

I’m using esi.tech.ccp.is and the web UI also seems to be a bit slow.

Could try switching to new host https://esi.evetech.net which is running on the AWS stuff.

Could try switching to new host https://esi.evetech.net which is running on the AWS stuff.

Thanks, but they’re the same for me. DNS for esi.tech.ccp.is returns esi.evetech.net.

Could be related to AWS stuff then if it just started happening recently?

I may still be on GKE then. I’ll move over tonight and see how the performance is.

Edit: I was just asked to kick over to AWS… so…watch this space. :3

I keep getting “Server has closed connection unexpectedly” on trying to fetch character notifications from ESI. :
Is there any query liimit? I’ve been querying it every 2 minutes.

There is no query limit, but there was a connection limit. AWS may have a similar querk.

I still get those spikes, but I won’t bother about it for now.

But out of dumb curiosity do I need to ask: how do you get 5ms?

CDN cache. I have sub 1ms ping to a node in Chicago.