Hi,
When I try to login to Test Server, there is a pop up saying CCP is collecting data from my computer.
I have concern about privacy. What kind of data? Would the Eve client be browsing my Document folders and email? 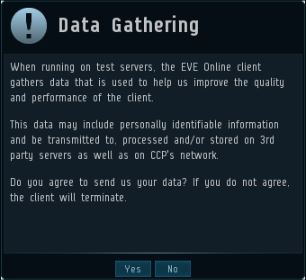 I think you can just run a packet analyzer and a process monitor and see it by yourself. If you are really worried just run the game on a separate computer or a virtual machine.

Privacy is getting more and more a concern, just see the Facebook legal problems nowadays. So, yes, I was also concerned by that statement, in particular because when I started the testing client, it lagged like hell every time I opened a file or a folder in Windows Explorer… very strange behavior.

But I don’t know for sure.

I think you can just run a packet analyzer and a process monitor and see it by yourself.

People don’t give a ■■■■ about their privacy. It’s going to end in an uproar, a few people deleting their Facebook profiles and that’s it. Nothing is going to change, just like nothing changed after Snowden. Quite the opposite, they saw that people don’t give a ■■■■ (what a surprise! Sheep only yelling, not taking any action!) and that emboldened them.

So no. People are still dumb, they still don’t give a ■■■■ about their privacy and Facebook isn’t going to change anything. Neither are Google or Amazon, who are just as bad as Facebook is and Microsoft wants in on the game too.
Do you care? Then take action. Delete your profiles and block their trackers (hello shadow profiles). If all you do is throw a tantrum without taking any measurements against it, then you might as well endorse it. Words don’t matter, actions do.

because when I started the testing client, it lagged like hell every time I opened a file or a folder in Windows Explorer… very strange behavior.

Not really. There are literally thousands of possible reasons for that behavior and not one of them is malicious. CCP isn’t going to collect any data beyond hardware information and everything pertaining to the client. They have absolutely no reason to. They sit in Iceland, not in the US.

“…Your father and I and evidently all the family you have email addresses for got an email from some game you play. It was a list and links to all your folders and browsing history. Frankly we’re very concerned about you. ‘sexy furry pics’ ‘my furry parties’ ‘furry play’? We need to talk.”

Since information is so valuable, I’m guessing they are getting everything they can to sell to 3rd parties… see: Facebook, Google… You think they care about your system? ha. At this point, CCP could be pulling in more $$ from this than from subs and micro-transactions.

At this point, CCP could be pulling in more $$ from this than from subs and micro-transactions.

Not even close. Data is dirt cheap on one hand and CCP would run into legal issues very quickly on the other. Them selling private customer data would be their end.

That’s my most concern!!

I think CCP should clarify on what data they collect. The wordings are too broad and can imply anything.

It’s only the test server. If you’re that concerned, you don’t have to use it. If you really want to anyway, do what was suggested in the second post and set up a clean environment for it.

Yeah, I know there’s encryption, but if you do some reverse engineering you might know how it is encrypted and retrieve the raw data before it is encrypted. Also you can still track what file and directory the client has touched.

But seriously, nobody spends so much effort on privacy of only a game. If you are a privacy nerd cared that much about privacy, you just would not play the game in the first place. Not playing the game is the most cost-efficient solution.

It’s why I chose not to log into the test server the other day. But my next thought was, if they are collecting all this stuff on a test server, what are they already collecting on Tranquility?

There seems to be this assumption that there is nefarious data collection going on. Why? What proof do you have other than a terms of service agreement that use a typical legalese?

Why would CCP waste their resources collecting data other than the basic system specs and game logs they need to help their system validation tests run on the test server?

Sorry, I understand a desire for privacy and what not. I understand a little healthy paranoia. But I just don’t believe CCP is really that out to gather anyone’s sensitive data.

The test server allows CCP to be able to gather data on possible issues and bugs on a larger level than what internal testing can give, especially important for new features and updates before they are placed on the live servers.

Data gathering was explained on the old forums by CCP Snorlax in 2015 when this was added. For ease, the official post explains:

In our continuous efforts to improve the quality of the EVE client we are starting to gather more data from the EVE clients when connecting to our test servers, such as Singularity. The next time you log in to Sisi you will see a dialog informing you of this data gathering and asking for your consent. You will have to accept if you want to play on the test servers – if you do not agree, the client will terminate.

What data?
We have been gathering performance statistics for a long time, but statistics can only take you so far. From now on we are gathering all warnings and errors that are logged from both the game engine and the higher level game code. Generally we’ve only seen these logs when running inhouse, with the LogServer attached, or in bug reports filed from you, the players. We’re hoping to get a much clearer picture of the state of the client by getting logs from everyone.

Generally we don’t log out any sensitive information, certainly no passwords or anything like that, but when logging warnings or errors we sometimes log out the full pathname of files being accessed – if those are stored in your Users folder the user name may be seen in that path. There may be other cases where something that might be considered personally identifiable data will go into those logs.

You can see what sort of data we will get by running the LogServer – anything marked as a Warning or an Error (yellow and red lines) will now be sent to us.

Opting out?
There is no opting out – if you don’t want us to get this data then don’t log in to a test server. Nothing will change on Tranquility, this data gathering only applies to test servers.

We hope you all agree that this is a good thing – we get more information about the state of the client, with less effort from you. We will get those warnings and errors even if you weren’t running LogServer, and have a better chance of fixing those hard-to-reproduce bugs that we only see in mass tests.

Just to note, since this post was in 2015, the “LogServer” program is called “LogLite” now in your Eve folder and when launched will load up the log window the post is referring to. If you want to see more about the test servers in general you can see this support document about them. Also in addition, if you go to the original post, CCP Snorlax does address a few concerns in there as well.

I hope this does answer your questions here, but that said, if you do have more concerns about this, I would recommend opening a support ticket to let CCP know directly.

One day CCP will sell their customer records. It’s just a question of when

Have I Been Pwned: Check if your email has been compromised in a data breach

Have I Been Pwned allows you to search across multiple data breaches to see if your email address has been compromised.