Noticed this since a few days. If you open the rclick menu while still dropping out of warp, it won’t update with the “Warp to” or “Warp to at …” entries on the first category you select, after the ship is completely out of warp. It used to be that, once the odometer shows m/s, by simply mousing over the category name it would update the options. Now the entire rclick menu needs to be closed, then re-opened to get back the options.

It is messed up. But it is better than about 4-6 days ago when it didn’t work at all.

Now it seems random, sometimes this works, sometimes it doesn’t. But I am actually not sure if it wasn’t like this before. And this randomness might be purely intentional just like the 20 years old issue with next jump sometimes not popping up on Select Item. All in order to make accidents to happen.

It never did that in the first place. The right click menu is static and only displays what is possible to do at the time of the right click. If you want a dynamically changing menu, you have to use the Radial Menu.

Sometimes it updates. Whether it updated always before I am not sure with, but I am using this method to warp over space from the very beginning. Radial menu is garbage tbh.

The navigation options never update in the right click menu when you open it before your warp ends, and neither do new things like newly available bookmarks. It’s been like that for the last 11 years at least.

In contrast, the radial menu updates the navigation options after warp ended and it’s more accurate than the right click menu, but each their own.

Well since I came back to the game 2 months ago, it worked for me almost always if not always. It stopped working like 6 days ago and for about 3 days it never updated. Last 3 days it is somewhat working but it seems random. Sometimes it updates, sometime it doesn’t depending on when exactly you right clicked.

There were more players reporting this issue in English help channel - right click menu not updating when hovering over other celestials as they were used to. So it is not like we are making this up.

Do you use Photon or the existing UI?

I have also made a bug report. @Dyver_Phycad you are wrong. You are straight up gaslighting. it did use to update when hovering over a new bookmark even if you opened it in mid warp. I used it all the time in PVP when you are chased.

Not sure what you mean with gaslighting. My description is what I experience for over 10 years in EVE. See screenshot. 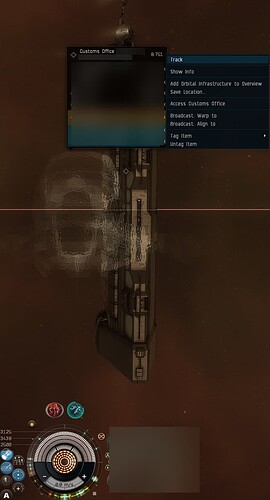 Did the same on a second object and it did not update to show typical navigation options either after I exited warp. I had to right click again to make the Nav options to show up.

Show me a screenshot or video how it updates when you fall out of warp. I would genuinely like this to be the case because it is a pain that it does not do that for me.

Show me a screenshot or video how it updates when you fall out of warp. I would genuinely like this to be the case because it is a pain that it does not do that for me.

This is bugged yet again where it mostly doesn’t work, than does. But try this.

Find a sector with lots of belts. Warp to one belt. During warp, right click into empty space to pop up the menu. Once you land on belt and warp drive is active, hover the mouse to the belts and start looking at them one by one if they present you an option to warp. From my experience, at least sometimes will at least some (but not all) show the option to warp there.

Similarly with bookmarks, often the bookmark I want to use is not offering the warp option, but another one does. Again, in recent days this has been bugged yet again so it mostly doesn’t work. Half the time I have to right click after warp again, but sometimes it works.

Note that I have a theory about this issue. First of all, it seems that once you hover over bookmark or celestial while you are in warp, that specific bookmark/celestial won’t update again and it also seems that other celestials/bookmarks in proximity of this one in the list might also never update anymore. Once your ship lands, bookmarks/celestials which weren’t hovered before should update and give you an option to warp (or approach). HOWEVER, it seems that many times the ship is invulnerable after landing from warp up to 4 or more seconds. Something like session changing - this can be seen when running abyssals for example where you have to move after landing to spawn abyss gate. And likewise, if it happens that you are invulnerable upon landing (for which there is no indication), the right-click menu will not update and as explained above, all the celestials and bookmarks which you will hover at will never update again.

I am not sure whether this invulnerability upon landing is new mechanic or not, but it sure is causing these issues amongst others. Since the invulnerability timer is not visible and it seems variable it cannot be predicted when you should be trying to hover the bookmarks so they appear as not updating when they should have which then leads to accidents happening…

Okay, I understand now what you are doing. I thought you were talking about the navigation options in the first layer of the right click menu. The nav options in the third layer used to update when you fall out of warp as you described, yes.

I just tried it with a few planets and got the same issue. Basically, all planets that I hovered over in warp don’t update, but all planets I didn’t hover over in warp updated with the to be expected navigation options just fine after I exited the warp.

That’s exactly right, they don’t update unless you completely close the rclick menu. Even more, if you mouse over everything in rclick fast enough while still in warp, nothing will update…

Update: since yesterday it seems that right-click menu updates like it should without need to cancel it and right click again.