“that boy’s balls so bad we had a funeral for them even though they wasn’t dead” - Marine Corps General David H. Berger 2021

I am the only non-propoganda nullsec FC that talks about the war, politics, and tries to have a laugh while doing it.
I am sorry but when you ban the word Delve in your twitter chat that makes you bias.

I am the only PAPI streamer, so expect tons and tons of random Imperium hate.
This is also not true as there are actually plenty of papi streamers on twitch. I mean TIS is about as papi as you can get.

My main points will be content deniers. I feel that gatecamps, asset safety camping, pipe camping destroys more content than anything else in the game.
Again I am sorry but these are not big issues in the game. I would think you cloaky camping in your interceptor with 4 stabs on it is a bigger content denier.
So I rather cast my vote for anyone other than you as your platform makes no sense and your statements are false.

Of all the things you can complain about… Ganking is the one you choose?

You know the kind of thing that EvE was basically built on? Plus you don’t even attempt to explain what needs a balance pass. Gate camping is a thing because it is an integral part of the game. It is literally a function of game mechanics. Are we supposed to camp in mid-warp or something?

These are such non-issues I cannot understand anyone who would vote for you.

There is no game mechanic that can solve stream sniping in a single server game. You identified that as a key point without mentioning any possible solutions. You don’t seem to understand what game mechanics are. You are arrogantly mentioning things that only affect you personally because your D-list celebrity puts you in a position of public scrutiny and you seem to want to ruin everyone else’s game without even a second thought for them because of it.

zkillboard stats are very important for being a csm

I hold the polar opposite position on gate camping that you do, and I have a lot of loss mails to prove my position. Would you be interested in us having a debate on your twitch, or one of the Imperium networks Twitch’s as to the merits and faults of each others positions and stances on this subject matter?

Guy’s gonna represent PvP as a whole, while combating the basic tenets of PvP-- because he has 3k kills.

@RonUSMC pipe camping feels kind of fair atm and I don’t see much of an Issue with it, people have the option to check intel sources, use pings or go around and most pipe bombers with bounce off scared if neuts land on pings, there’s also wormholes available with a nicely updated public bookmark folder from eve scout for Thera holes too, also I feel gate camps are actually very good content for the game, presents the opportunity for more fights to happen,

wdym here ? like people station camping the places assets are delivered to ?

What makes asset safety camping a problem? It seems quite a bit more forgiving than the previous system of leaving the person’s assets in a station without docking access, prior to asset safety and Upwell structures entering the game.

Asset safety camping is a player-made solution to the mistake that is giving asset safety to nullsec. CMV

When Mittani was screaming that he was going to throw us into a Wood Chipper and bury us in a pit … yes, I said he sounded like a hate preacher. His reply was he was “in character” and he was “roleplaying.” When a grown man starts yelling and talking about throwing people in wood chippers, roleplay or not, it is strange.

At least with the Mittani most of us know when he is role playing and when he isn’t, with or without special hat.
Now, when another grown man talks calmly and decidely about how a certain large group of pilots are bad for the game as such, and therefore need to be removed from EvE for once and for all none here would call that role playing. The fact that you don’t even compare the two stories leads me to believe you are at the very least slightly biased and not ready to represent everyone - regardless of affiliation - in a neutral way in the CSM. It is important to be able to distinguish between person and game.

someone from viewers asked “Why Imperium will just not surrender?”
Ron answer was: “Because we will not accept their surrender”.

You are forgetting the last part … where I say “Not like they would surrender anyways.” Right? There’s no need to take my quotes out of context and then dramatize them like I’m a hate machine . It’s hard enough to stream Eve by itself. Let alone answering newbro questions all day while dancing the political line so I don’t spawn more people to follow me around and hate on me. We should all try to be inviting to new players, with their questions, and do our best to help them. As always, if you can do a better job of streaming and answering questions… please tell me when you do. I’ll raid you and help you as much as I can.

Please cover your ears from this hate filled propaganda reply to a newbro question in chat.

Of course, you can go to just about any show on INN and you will find multiple times where they call me names, talk crazy, tell me to f off, all kinds of things. But me replying to this question … is me indoctrinating them with propaganda and questions my integrity, and makes me what ? lower than a snake or something. You guys are cracking me up.

Cpt_Soban should run for CSM. Him and Ron would make the perfect tag team of “unbiased” CSM members.

so expect tons and tons of random Imperium hate.

Let’s be honest here Ron, your brand of helping new players is to also fill their heads with Papi propaganda. It’s like you can’t help yourself, you have to tell anyone that will listen about the evil Mittani and his brainwashed followers (your words). How Goons are cancer to this game and need to be stopped. So you posting one clip of yourself giving a politically correct answers means nothing.

Used to love you, really do, all of this would have happened 9 month ago, I would have vote for you.

Today, you are just a pathetic pro-papi spinbot, you talk ■■■■, you ban people for nothing, you cry all the time, you spin all the time, you even ran away from EVE for 2 month because your alliance denied your SRP and only came back when your side was winning, what a nice show for everyone, running away from any trouble and when the big guys paved the way for you, you come back and take all credit.

You are not suited as a CSM, that would have another Olmeca : A crying bias kid boring the room with their none sense.

What happened to you with this war is sad, you went from a neutral streamer to a grr goons, sadly for you we do represent a part of this community and vote whoring thanks to your daily stream won’t lead you anywhere. Calling us, Goons line member brainwashed when you spend all your times brainwashing anyone on stream is just shameless.

Ron is not perfect.
In fact he is full of flaws. For example: he has opinions, he talks a lot, he often streams EVE for 8-10 hours non stop, he makes jokes at the expense of meerkats, he thinks that cobra is the fastest land animal, he makes fun of the goons from time to time, he has banned some erudites on his twitch stream who were at later time allowed to return, he doesn’t have a Molok. Worse flaw: Ron has shown some human emotions …

On the other hand, Ron is a great person to represent the player base of EVE in the CSM, because:
he understands the game, he is committed to it, he popularizes the game like no other single streamer at this point, he has concrete suggestions to improve the gaming experience, he is funny and has a generally good sense of humor. Best of all: he wants to reduce the impact of and ability to form large coalitions which can influence large portions of the EVE map, while dictating gameplay to smaller groups, without any fear of repercussions.

The CSM needs new faces and fresh ideas and Ron provides this.

I understand (and share) Ron’s dislike of gate-camping and hope he can influence progress in that area.

Those who are in CSM should fight for us and should not be fatigued or disillusioned with the process or issues, therefore we should give chance to new and dedicated people to serve.

he understands the game

he is committed to it

he popularizes the game like no other single streamer

he has concrete suggestions to improve the gaming experience

Is this true? More importantly, is this even relevant?

The BIG question: Would Ron create an alt just to endorse himself? 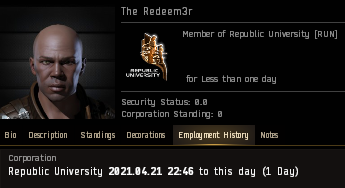 The answer to all, but the last, of your questions is ‘True’.

I don’t know if Ron would create an account to endorse himself. You should ask him.
Meanwhile, considering how toxic this can get, I’d rather use a new character whose name reflects my username in Twitch.

Best of all: he wants to reduce the impact of and ability to form large coalitions which can influence large portions of the EVE map

Yet currently he is a part of the biggest coalition this game has ever seen. It’s sole purpose is to exterminate Goonswarm. So either you have no idea what you are talking about or Ron is a hypocrite.

Yet currently he is a part of the biggest coalition this game has ever seen. It’s sole purpose is to exterminate Goonswarm. So either you have no idea what you are talking about or Ron is a hypocrite.

There is a third option - perhaps you are wrong?

He has direct experience with what it means to be a part of a super large coalition. Unlike most of us. He has talked multiple times on this subject and described how toxic it can be to have such large coalitions in game.
In any case, while we are exchanging posts here he is live streaming, right now, and I am sure he can answer those questions/concerns.