Solo PvP: does the Merlin need a buff/re-work?

I’m trying to understand this ship. I like it, but I can’t quite see past the following:

Even as a seemingly cheap starter ship, the Merlin is something of a trap: sure, it costs less than half the next most expensive Caldari T1 frigate, but whereas you can fit a fairly dangerous Condor for 2-3M ISK, you have to drop at least 5-6M on a Merlin to end up with a much smaller target profile.

That said, yes, of course people get kills with Merlins and even make it look easy. There are some relatively recent YouTube videos showcasing rail-fit scram- and point-kiting Merlins that are quite thought-provoking. People are well aware of the Merlin’s drawbacks, making such fits a surprise and the ship itself prime bait. But overall, this ship seems to justifiably occupy the proverbial “bottom of the barrel”.

This is why I am asking whether the Merlin could benefit from a buff or new niche or something? Interested to hear your thoughts and experiences.

It can comfortably fit two ecm with its cpu, cover well their effective ranges with its base targeting range and fit blasters to fend off drone raids. The other two ships you mentioned, not so much.

Someone has to be the worst, and in this case, it’s you.

Do you need to be a scumbag ?

Do you need to be a scumbag ?

Someone has to be…

Not every T1 frig is a FW frig, and using 1v1 plex FW as the sole means of evaluating the frigate is a bit disingenuous.

Even within the FW newbie plex arena, how versatile is the ship? If somebody can check your name in local and d-scan down the ship, will they have 100% certainty of victory or is it closer to “if they are brawl I win if they are scram kite I die”? How well do active vs buffer fits change things, or dropping a high slot for a neut to bring a bit of a nasty surprise against a cap heavy fit?

How well does the frig handle hard tackle roles, either MWD + web/scram or MWD/AFB/scram where the job is to live long enough for the bigger ships to arrive, or straight up tank larger ships with T1 logi frigs supporting?

The slowest frig is still faster than any cruiser, and how does the EHP and resists compare to the other frigs?
If the intended balance is slowest but sturdiest, does the extra bit of sturdiness make up for it?

Things to think about.

Dadgummit! You made me log in to check out the Merlin.

Ok. So it’s the standard Caldari better shield resists thing. This is NOT a minor thing. The Merlin is meant to take a fist to the jaw, early in the fight and not pass out. 4 mids match up well with the idea of shield strength. Slow shmo. Put a web in one of those mids and they’re slow too. Ok?
Not so much a kite ship, I think. When I see hybrid, I think blasters. You know, the stove’s burner is on High right now. I think some ships are meant to focus, some are meant to be flexible. The ones that can focus do THAT thing well. The merlin looks like the guy you DON’T want to scram, web, and blaster you. I love a Rifter, but if super glue Merlin catches me, I’m gonna die.

Dual web saar blaster Merlin will surprise other frigs and give you nice kills. It’s weird cause you don’t take advantage of the ship resist bonus, but this bonus is more useful in a gang then solo.

Merlin indeed seems to be a bit behind the rest of the frigates when looking at zkillboard stats. 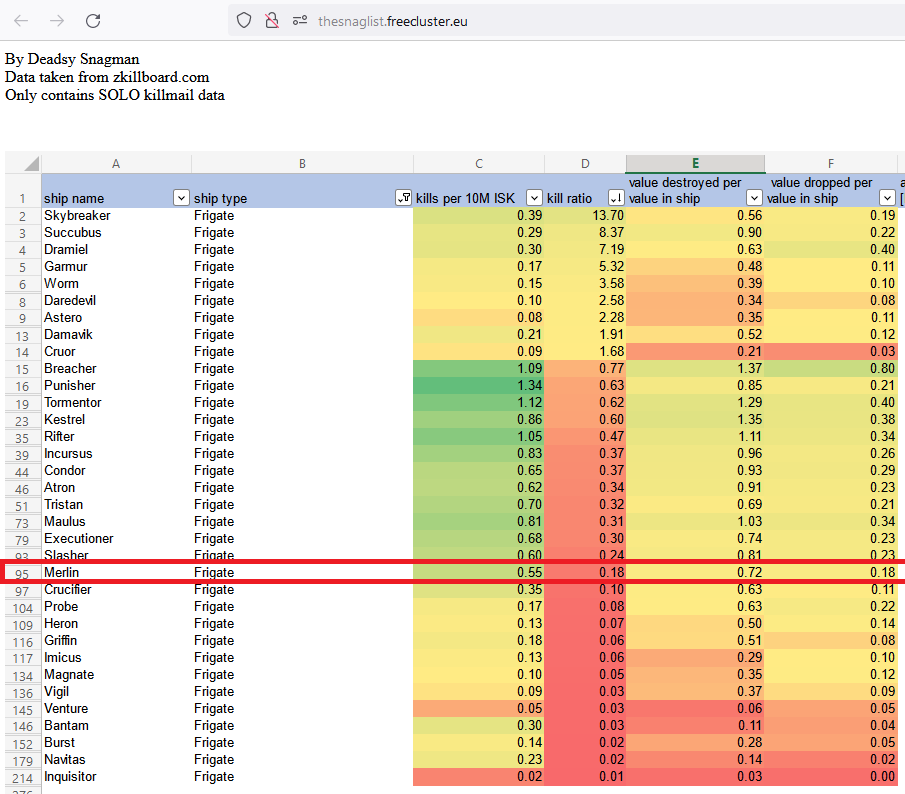 Looks like it fits in nicely with the rest of the data, to me. Just because something is in the middle-low end, doesn’t mean that’s justifying something as aggressive as a rework.

I am asking whether the Merlin could benefit from a buff

Best way to buff the merlin is fly a Harpy.

It’s too slow to control range without dual webs and with dual webs it’s paper thin. The blaster fit (which is best optimized) has too low DPS to reliably punish an opponent even if they slide in on the button. While it sometimes has favorable matchups, such as against the Tristan or Atron, those hulls have common alternative fits which solidly counter it (neut, disruptorab) while the Merlin’s PG/CPU and slot layout give it very limited fitting options.

It’s serviceable but firmly second class in a fleet FW context - I’d rather have 15 merlins than a lot of t1 alternatives, but 15 kestrels, punishers or tristans are preferable to merlins. I think the rail variant is somewhat underrated for fleets, though.

Simple solution would be to give it either a 5th mid slot so it can dual web or fit a tank comparable to its armored brother the punisher, or maybe give it a utility high to improve its matchups vs neuts.