In mid-YC 105, a corporation known as SMaK Enterprises was born out of the tribal regions of Molden Heath.

They became renowned for their conflicts with Amarrian imperialists and those who enslaved the Minmatar race - a fire fed by the fuel of rage within the scarred memories of their CEO, DeT Resprox. Led into battle by their Fleet Commander, Skutter, they flew in a combined force with like-minded corporations within the Ushra’Khan alliance against their oppressors. Names became infamous in times of war - Annu and Alasse Cuthalion whose names will live on as champions into the future of the Matari young.

Time passed and many wars were fought with great losses to either side. As that time passed, the days of SMaK Enterprises ebbed and the time of the exodus saw the Matari tribes move onwards towards their own goals. The tribe of SMaK were disbanded and the former members sought out their own paths in the realm of the cruel-minded Reikoku. Here, DeT Resprox forged a pact with the narcotic barons of the Blood Raider Covenant, they too had been locked in a struggle with the Amarrian Empire. Profits increased as drugs were pumped into the foul veins of Amarr under the supply of Draclira Merlonne and slowly a new form began to mould itself from the hatred placed upon the Amarrian offspring.

The first shots had been buried into the Imperialist gut.

T.R.I.A.D doesn’t only have a long and rich history heavily interwoven with the lore of EVE, it has also been one of the core entities in Minmatar faction warfare for several years. We offer regular gang and fleet ops, both as corp and as part of Ushra’Khan.

We are an international, English speaking community, with a strong emphasis on community. We are accepting casual players, but being part of an alliance with presence in pretty much all timezones are able to cater for more dedicated players as well.

While we can’t offer regular classes and training in a similar fashion as EVE Uni or similar, we do consider ourselves new player friendly: as a new player you will have to put in some effort for self teaching but can always expect help and guidance whenever you ask for it.

The Tribal Republic Independent Agency Division is running the first and to our knowledge still only player run mission agency. The difference to the in game NPC mission agancies is that all our missions and campaigns are PvP based and aimed at impacting the EVE universe. 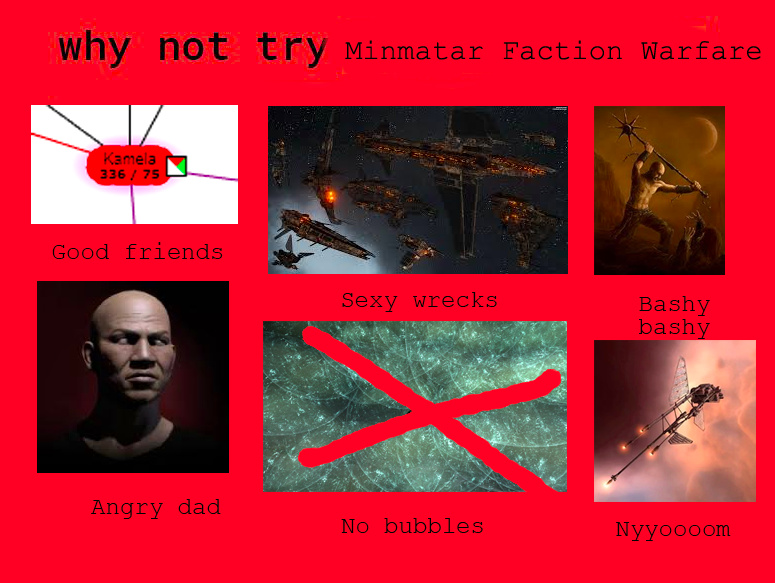 Here’s an example of some of the kinds of things we do: Faction Warfare Battle Report: Aug 28 2017

Free bump, just for that recruitment poster, love it!

We just took Sahtogas. Join us and help us claim the whole warzone.

Statistically, Minmatar is the best faction in the game. See http://evewarfare.com/

Here’s a poem i wrote about a roam we did into Provi: A stroll through providence - a Minmatar Militia poem

Want to fight stuff? Here’s what we fought last night: The battle for Kamela (September 2017)

Another system falls to the Minmatar: Huola falls

Join us as we push for Sosala and total warzone domination.

Tried to contact one of your guys in game 3/4 days ago still yet to hear back.
Can’t use the pandora website myself as it’s horrifically optomised and I sit waiting for 20 mins.

Do you have questions about joining? If so, feel free to mail me in game, or maybe join our teamspeak for a chat (mail me for details).

If you don’t have questions, feel free to just put in an application with your api key.

We’re working on a replacement for the pandora site.

This topic was automatically closed after 90 days. New replies are no longer allowed.