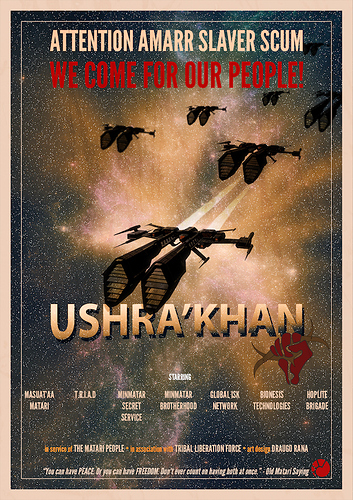 We are an international, English speaking community, with a strong emphasis on community. We are accepting new and casual players, and being part of an alliance with presence in all timezones are able to cater for more dedicated players as well.

Ushra’Khan has a long and rich history heavily interwoven with the lore of EVE, and has been one of the core entities in Minmatar faction warfare for several years. We offer regular gang and fleet ops.

Ushra’Khan have recently set up operations in null sec. We are recruiting pvp, ratting, mining, and industrialist pilots interested in helping us establish these operations. There’s lots of opportunities to make isk and shoot things, while being part of a team working together on common goals.

Join in-game channel Voices U’K to find out more and speak to an Ushra’Khan recruiter.

We care about having fun, not our killboard stats. Here’s the pvp fun we’ve been up to lately:

Come join us in null!

An npc carrier killed my VNI last night. Come lose VNIs and make crazy isk in null with us!

Hi! So I’m new and looking to get into moon goo with the life blood patch. Would you guys hire a newbro as a miner? I’m training skills as fast as I can and considering dumping a few injectors in.

Hi,
Yes, please join Voices U’K channel in game and chat to somebody!

Active in null and FW space in the hours before down time, perfect for those elusive kiwi’s.

More pilots join us every week. Come join us too!