Greetings pilots. I wish to share something of personal significance that has come into my possession. 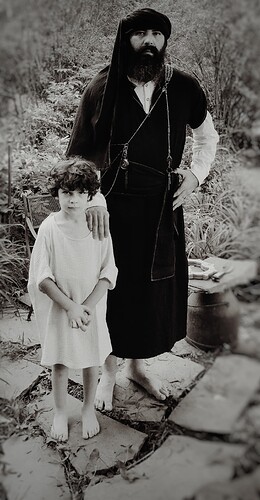 These unofficial pictures were taken by members of the 51st Exploration Corps during their assessment and pacification of the northern reaches of Mishi IV’s smallest continent. They depict the Shamar or “Water Baron’’ Eisil Karuna and his first son Mani in the Shamar’s private garden. The pictures are clearly staged for the benefit of the visitors, with items of significance from the Shamar’s collection arranged for the camera.

By all surviving accounts Eisil was an intelligent man, known for sponsoring artists, alchemists and mechanists. He seems in these images to understand the significance of these visitors and indeed he may have already been made aware of the fate of those tribes that failed to be compliant. His journals have been lost to us, however there are extant accounts by the Corp that after learning of the majesty of the Empire the Shamar went throughout his town and demanded his people bring out all their objects of worship. Building a great bonfire in the town center he had them personally cast these idols in, finishing by bringing out his extensive personal collection and offering them to the flames. This was recorded as one of the most amicable conversions of the conquest.

The records of the 51st are kept in their archives. These specific pictures were however taken in an unofficial capacity and appear to have been confiscated by the Ministry of Internal Order before the 51st returned from their exploration of Aridia. Citing doctrinal purity they were sequestered in the MIO’s Archives of Pre-Civilized Idolatry. They remained there for almost twelve hundred years. Recently I composed a formal request for possession of the pictures. Due to my long relationship with the MIO, service to the Amarr Empire and my connection to the images my request was granted.

The fears of the MIO from that time period have long since abated. The Ni-Kunni have proven themselves again and again to be a faithful and valuable addition to the Empire. I present these images only to show a little window into our past. A glimpse, however brief, of a time before the men of gold came from the sky, leveled the world of my ancestors and remade us. An image of a father. And his son. 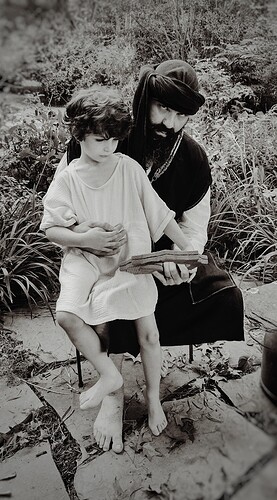 Was this interesting to you? Are there questions? Do you have a similar story of your people’s history? I would love to hear it.
Blessings.

The recent experience delving into the past of my family has renewed within me an interest in the history of the Ni-Kunni people. I have spent the last few months conversing with the learned, making observations and researching amongst scattered records. In the hopes it might entertain at least a few amongst you I would like to present the theories this process has inspired in my mind.

In the following essays I will first present the incontrovertible facts affecting Mishi. I will then theorize in what I hope is an objective as possible manner as to what these facts say about Mishi’s history. Finally, I will indulge in wild speculations of my own that I hope to evolve sensibly from the preceding.

Though it is a matter that seems far from settled amongst those who study such things, I have chosen to subscribe to the belief that all mankind shares some sort of common ancestor. Or at least that some sort of disparate peoples all came at once, or in waves of migration, to the local cluster some ten to fifteen thousand years ago. There is evidence that I will cite in later arguments of a prehistoric spacefaring civilization present on Mishi IV. Given the similar evidence found elsewhere and the compelling nature of the ancient jump gates all pointing so clearly to New Eden, I think it the most sensible baseline to work from.

I am no Astrogeologist, Biologist or in fact specialist in much of anything. Though many years ago I completed the same education as so many of you, I cannot pretend to have been an exemplary student. My interest in this is purely amateur. I simply find myself wondering.

At the end of a prow of stars, rising into the gulf of space between the tortured spacetime of the Trace Cosmos and the Cauldron sits the constellation of Mayonhen. It’s very tip, the star Mishi. Around this small yellow star, the homeworld of the Ni-Kunni people spins. When first discovered a thousand years ago it was a world of deserts. A golden jewel whose people were lost in the darkness at the edge of everything.

The region, Aridia, in which Mishi sits is considered to be one of the least valuable areas of stellar real estate in the Amarr Empire’s vast holdings. Though there are planets and moons aplenty, strategic resources are sparse. While the natural lanes of travel allow one to pass from Kor-Azor to Khanid to Genesis to Solitude, in truth few dare the low security over mainland Empire routes.

Mishi IV itself was for most of its existence a barely terrestrial world. Most of its water is poison to human life. Vast tracts of its land are so hot a man will expire within hours when the sun is out. Possessed of infinitesimal amounts of iron and lacking in many heavy metals. The fossil fuels it does possess are locked deep in an earth difficult to drill into without steel. Its single moon, a tiny rock running through the sky with breakneck speed and providing no assistance to any native space program should one have even managed to develop. This lack of value, based on essential characteristics that surely existed when Mishi was first colonized, is what raises the question. Why Mishi? Why of all the systems explored by the Empire is this where such a large civilization thrived?

As stated before, Astrogeology is not amongst my credentials. An amateur survey of the local stars in proximity to Mishi does however present some compelling reasons to rule these systems out as potential regions of colonization, at least for a burgeoning civilization.

We enter Mayonhen through the system of Haimeh. Its gateway position has afforded it by far the greatest amount of development capital and infrastructure in the constellation. The two temperate planets, currently colonized, would seem to immediately present alternatives to Mishi. In reality both are subpar. Located unfortunately far from the sun, the eighth planet is both cold and possessed of a highly erratic orbit. The sixth planet is closer and warmer but due perhaps to whatever stellar incident led to its cousin’s eccentric orbit it is off kilter, though to a lesser degree. In addition, it has virtually no land, being barely classifiable as a temperate planet at all. If one desired to settle on an oceanic planet the fourth planet would be far preferable, as it surely is to many colonists in the present day. Like many systems in this constellation, it is to the star itself we must turn our attention. A small pink star, Haimeh is old, guttering its last flames into the cosmos before it inevitably bursts. Although the scale of those events may seem to exist beyond our timeframe a star in such a state can be fickle with its light and warmth.

From Haimeh the systems of Chibi and Bazadod dead end in the abyss separating Mayonhen from Fountain and the rest of Aridia respectively. Chibi, though rich in mineral wealth, is a swirling hell of stellar winds and ruined planets rapidly orbiting its beautiful and deadly blue star. The CBD corporation retains valuable contracts in the system from heavily shielded stations located no closer than the sixth planet. Even the Triglavians seemed unwilling to invest much effort in taking the system during their invasions if the accounts of Edencom defenders are to be believed. After visiting Chibi, Bazadod may at first glance appear a more inviting prospect with the warm glow of its orange-yellow star. There are even a further two temperate planets, the seventh and tenth. A closer inspection reveals the unfortunate truth. Like some far worse version of Haimeh, a cataclysmic occurrence in the past has critically destabilized almost all of the planets orbiting Bazadod. The tenth is a laughable distance from its star, only with difficulty retaining its temperate status. The seventh finds its orbit pinched between the erratic paths of its brethren sixth and eighth planets. As the sole station in the system, a MIO testing facility, attests to. Bazadod is likely one of the last choices for colonization.

The next two systems making up the triangle of which Mishi is the point are easy to dispose of. Avada, though the second most developed system in Mayonhen after Haimeh, is a white dwarf. The cold light of its star warms only the closest planets. It is perhaps ironic then that the system is known for its vast and lucrative reserves of ice. Pahineh is another blue star. Though smaller than Chibi, it is still deadly due to stellar ejecta flung by its swift rotation. The one temperate planet it possesses lies perilously close and would require heavy shielding for any long-term habitation. Though providing much in the way of material resources through their calamitous inner planets and asteroid belts there is little to recommend them in terms of non space-based colonization.

We come finally to Mishi, the tip of the spear thrusting into the dark above Aridia. Mishi’s star is small and yellow. Warm, stable, and with low amounts of radiation it will remain comfortable for billions of years. The nine planets of its system all orbit in a stately and ordered fashion. Two gas giants, worlds seven and nine, guard their siblings in the inner system from unwanted visitors. Blessed with temperate planets four, six and eight, with the subject of this treatise Mishi IV being the closest to the sun. Given how hot my home world is, the three innermost planets will likely remain barren. However, the fifth planet could very well be terraformed in the future and perhaps even become the most habitable planet in the system. The sixth planet is on the colder side yet eminently habitable as well, raising questions in fact as to why it was not where my ancestors chose to live. Planet eight on the other hand is less of a mystery, its temperate status due to the geothermal effects of being caught between the gravities of its larger neighbors.

Judging by the local stars and their planetary makeup it is in fact likely that far from being the worst available option, Mishi was the best system to attempt colonization of in the local area. There are other possibilities of course, Haimeh VI is the logical choice best followed by an underground colony on Pahineh III. Neither though truly compare when considering all the factors that make a system desirable to a new colony. Especially when lacking in the resources necessary to divorce itself from the planet and star chosen. It is perhaps worth noting that it is also the farthest system out on its jump gate chain, which may not be coincidence.

There are greater questions raised from all this. Why, out of the several available planets was the fourth chosen? Why go so far out to find this system when closer to what would become the mainland Empire there are others with habitable planets that show no record of colonization?

To those who may find it interesting, I have added another section to my musings.
Blessings.