To the FACTIONS of Eve

First, you’re going to need to get a bunch of players on board in order to have any hope of making an impact that is noticeably larger than a routine market swing.

Second, guys have fuel and plex bills. So, if you want to propose a strike that will greatly impact many players’ capacity to earn, you might want to give them more of a heads up than negative 2 days.

Third, if, by some miracle, you do happen to gather enough people to the cause to start impacting the market in Jita, you know scabs will start trying to take advantage of the situation. Thus, in order to actually bring Jita to its knees, you’ll need to be prepared to use force. So, before even attempting this, you’ll need to learn how highsec PvP works. The problem with this, however, is that if you learn how highsec PvP works, you’d learn how to manage the risk of highsec PvP in the process, which means you would no longer have any reason for striking in the first place. After all, what’s the point of striking for a safer new eden, if you already made it safer by learning how to play the game?

Speaking of which, if you would like an advisor to teach you how to stop sucking, I am available for the bargain price of 10 billion isk. This is less than 33% of the total isk your members lost in the past 11 months of your existence. In exchage, I will teach you:

Or, if you don’t want to pay, maybe you can spend your time trying to learn these things on your own. I mean, that’s certainly a much better use of your time than a hastily thrown together strike that would probably hurt your members more than it would hurt Jita.

And, not for nothing, but a dangerous New Eden benefits the good industrialists and traders because:

Thus, to them, your proposal basically amounts to, “I don’t know how to Eve, so I’m calling on you to make a significant short term sacrifice that, if successful, will hurt your long term profitability and make the game more boring.”

Forum drama… entertaining for a while

NPC factions should just simply disallow docking to anyone with -5.0 standings to them. They can’t be sending their army on you when you enter their space, but then harbor you in their stations.

Maybe it’s just security theater. They put up a front about caring whether or not capsuleers kill each, but, in the end, don’t care. In fact, they might even secretly prefer that capsuleers keep fighting and killing each other. Perhaps, they look at it kind of like an inmates in a prison. Publicly, they have to look like they’re taking all reasonable measures to prevent it, but privately don’t really care because they think of it as one less inmate costing the state money and one less scumbag in the world. 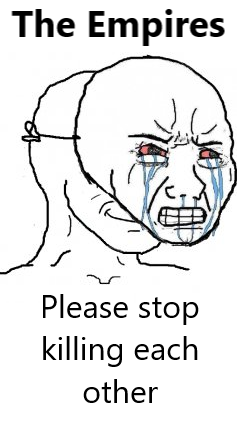 Also, the mechanics were designed for balance, and not to make sense from a real world policy perspective.

if you want to propose a strike that will greatly impact many players’ capacity to earn, you might want to give them more of a heads up than negative 2 days.

as for boycotting Jita, I’ve been doing that since the first time I went there…

Doesn’t CODE have better deals then that?

CODE died when James315 died.
It’s now SAFTEY. And the future is Aiko.

Hhhhmmm, all viable and interesting points.

A boycott of Jita is really gonna punish those Burn Jita griefers!

as for boycotting Jita, I’ve been doing that since the first time I went there…

Went there once. Didn’t like being there. Sold some stuff. Haven’t returned since.

The “Governments of EVE” are NPCs. You won’t get an answer. Make your own. All of the high-volume traders, haulers, miners should divert away from Jita and setup trade at other 1.0 systems. This is probably one of the best alternatives to really boycotting Jita.

Only issue i have had with the whole docking thing is minmil in amarr space docking at an imperial shipment station when i try to kill them or any other pro Amarr station. If someone is in a militia, i dont think they should be able to dock.

I also flew to matard space to sell stuff while im in Amarr militia, blatantly Amarrian and have -4 something with Matardis. That shouldn’t be a thing and it was hilarious.

Also consider that Amarrian NPCs make it dangerous for folks with bad Amarr Faction standings – including Minmatar militia members – to go to belts in some Minmatar High Sec space.

Joint Harvesting is a corporation of the Amarr Empire that spawns diamond mining NPCs. It has stations in Minmatar High Sec that spawn these fleets up to 3 jumps away from their location, which includes the Rens trade hub system.

If a Minmatar militia person goes to a belt in one of these High Sec Minmatar systems – for newbie ratting or mining (ew) – and there are Joint Harvesting diamond NPCs there, they will spawn a response fleet. Diamond response fleets are no joke.

Edit: As far as I’m aware, Joint Harvesting is unique in this regard – I do not believe Caldari, Gallente, nor Minmatar’s mining corporations stations are anywhere outside their respective Empire space.